USGA executive director Mike Davis pushed back at golfers who criticized the greens at Chambers Bay, but admitted they had some problems. Part of the problems included tightly wrapped golfers. 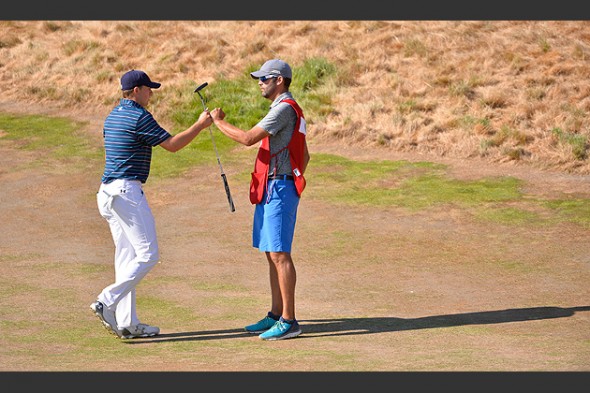 Jordan Spieth, left, celebrates with caddy Michael Greller on the green of the 12th hole Sunday at Chambers Bay. / USGA

Mike Davis was nearly as invested in Chambers Bay as a father might be in a son’s passion. Fortunately, he didn’t have a kettlebell weight to swing at critics of Chambers Bay. But the U.S. Golf Association’s executive director did push back against the golfers who blasted the condition of the greens at the U.S. Open.

“In some ways, they weren’t as good as we would have hoped,” Davis told the Seattle Times, “but some people would make it out that they’re putting on broccoli. I completely disagree with that assessment. That’s an unfair assessment to say they were that bad because we have had bad greens before that were bumpier than these; we just have.”

From the time of the decision in 2008 to award the Northwest with its first Open for a new, links-style course, to Sunday, when the tourney ended with a memorably wild finish, Davis has shepherded the course through setbacks, skepticism and success.

“What happened this time was something that really was beyond the control of the grounds staff here and the USGA,” Davis said. “Having done a lot of these things (conducting Opens), I look at it and say, ‘Yes, we had bumpy greens.’ But at the end of it, we’ve had bumpy greens many, many, many times at the U.S. Open. We’ve played this event 115 times, and the vast majority of them have been on poa annua greens. Later in the day, there’s a bounce to them.

“If you have ever looked at that famous putt Tiger Woods made at Torrey Pines on the 72nd hole, that ball was in the air 30 times.”

Davis’s defensiveness was predictable. But he also mentioned a key point: Part of the problem was out of human control — the weather. In the run-up, the absence of normal rainfall dried out the course faster than daily hand-watering could compensate.

The USGA’s job is to make the course as tough as reasonably possible, which includes fast greens. But the eagerness for toughness may have crossed a point of no return, especially with the invasive poa annua grass that was pushing out the native fescue.

Even Billy Horschel, probably the harshest public critic among the golfers, saying he “lost respect” for the USGA over the greens issue, referenced the contrast from when he practiced at Chambers Bay in late April.

“This course was really green six weeks ago,” he said. “The greens rolled a lot better than they did now. They had grass on them. They weren’t very fast. But they weren’t bouncing like they are this week. And I think when they went ahead and cut them down, they tried to get them quicker and faster. That’s when they lost some of the fescue and that’s when all the dirt started showing up, and the only thing that survived was the poa.

“I didn’t think it would be that bad six weeks ago. I thought they would have plenty of time to get them into a condition that was very playable.”

Others suggested that the greens should have been completely redone, a fact that ignores the notion that a partial or complete shutdown would have cost the public course a chunk of revenue that is helping retire the construction debt.

The ultimate analysis awaits the post-mortems being done by the USGA and Pierce County about what worked and what didn’t, and how to improve things in time to bid for another U.S. Open 10 years out or so.

But one factor that needs to be considered is another invasive species that influenced matters — the privileged touring pro. Many of these guys live in a rare bubble of special treatment — limos, starlets, trembling club officials and jocksniffing CEOs — that tends to warp perspective.

Brandt Snedeker, an 11-year pro with nine tour victories, including this year’s Pebble Beach pro-am, finished eighth Sunday after a 69 left him with a one-under 279. The Vanderbilt grad, ranked No. 25 in the world, volunteered that many of his tour mates take themselves a bit too seriously.

“I had a blast,” he said. “I understand guys were complaining about the greens, whatever it might be. But I played on quite a few greens that were just as bad, if not worse, than this on the PGA Tour.

“I think we get kind of in the moment of the tournament and get wrapped up in everything, and everything at majors seems to be turned on overdose. Every little thing sets you off. I thought the ball rolled fine. If you hit good putts they’ll go in. You can’t beat the venue. The vistas out there were gorgeous. I thought the golf course played great.

“I thought it was a great thing to be here. I love the fans. The fans are golf-crazy because they don’t get to see it very often. I hope we can come back soon.”

Understandably, with the professional stakes, golfers can be as fussy about outdoor conditions as Olympic skiers or race-car drivers. But they aren’t always the most objective observers. As far as the USGA, they knew that choosing a quickly draining links course in a summer climate that has noteworthy droughts was a risk hard to manage.

Chambers Bay should always remain an unconventional course in a breathtaking landscape. In 10 years, the agronomists will have an app for course corrections, and the golfers will have their knickers unbunched.