A disciplinary committee came down hard on Clint Dempsey, suspending him for six matches, or two years, whichever is greater, for his tantrum in a June 16 Open Cup game. 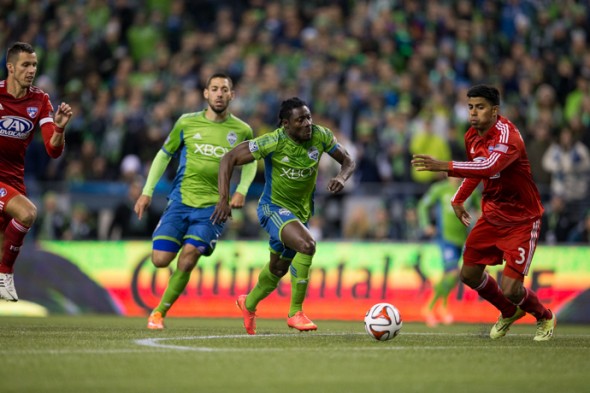 Sounders forward Clint Dempsey has been suspended for a total of six U.S. Open Cup matches, or for the next two years of tournament competition, whichever is greater, the organization’s discipline panel said Thursday. The panel also fined Dempsey, currently serving a three-game sit-down levied by Major League Soccer, an undisclosed amount.

The suspension stems from Dempsey’s tirade during a fourth-round match between the Sounders and Portland Timbers June 16. Late in the match, which resulted in Seattle’s elimination, Dempsey, in a rage over what he deemed poor officiating, snatched and  ripped apart the booking notebook of referee Daniel Radford, resulting in his red-card ejection.

Dempsey was one of three Sounders ejected from that match, held at the Starfire Sports Complex.

Dempsey, selected to USMNT for next month’s CONCACAF Gold Cup, will not be permitted to play in Open Cup matches in 2016 and 2017 and possibly future years, depending on how long it takes for the Sounders, or any future team of Dempsey’s, to play the six matches stipulated.

Dempsey has waived his right to an appeal, according to a press release from the US Soccer Federation, and late Thursday issued the following on his personal Twitter account:

I would like to apologize for my actions in the U.S. Open Cup.

Dempsey’s MLS suspension concludes in time for him to join the national team for the 2015 CONCACAF Gold Cup, which begins July 7. If the U.S. advances through the tournament, as expected, to at least the semifinals (July 22), Dempsey probably won’t rejoin the Sounders until August.