Sounders are 0-3 in MLS since Clint Dempsey’s act of foolishness in U.S. Open Cup loss June 16. The losses aren’t all his fault, but his failure to see consequences beyond himself is. 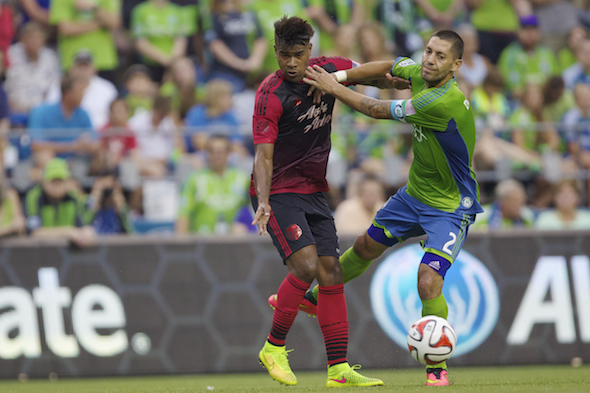 If it were me, I’d have taken away his juice boxes and his video-game privileges, and banned him from staying out after dark, playing with the dog, and rapping. Especially no more rapping; the latter would be a throw-in for the sake of humanity.

Perhaps you have other ideas for punishing the child-like petulance of Sounders star Clint Dempsey June 16. Certainly most everyone in soccer has had a say, from the U.S. Open Cup to MLS to U.S. Soccer, which Thursday announced that Dempsey was stripped temporarily of his captaincy of the U.S. Men’s National Team for his tantrum.

I can’t wait for the Roberto Alomar Appreciation Society to issue a condemnation.

Late in the U.S. Open Cup game at Starfire won 3-1 by the Portland Timbers, Dempsey tore up the notebook of referee Daniel Radford after he booked a Dempsey teammate with a red card. Even though there was no physical contact between the player and official, the act was deemed referee assault, a most serious matter in any sport and worthy of a long suspension.

In the opinion of witnesses, including Sounders coach Sigi Schmid, the game-long dubious calls were indeed scorn-worthy, and the outcome of ending the game with seven players against 11 was absurd. But none of it was worth Dempsey’s foolishness.

“They left their hearts out on the field, and I think they got robbed,” Schmid said of his team. “It’s got to serve as motivation and fuel to do everything we can in the league, to win another Supporters’ Shield, to do well in the Champions League, and do well in MLS Cup.

“It’s disappointing for it to end like this, to force your team to play a team 7-on-11.”

Well, the episode hasn’t served as anything but a detriment. Dempsey served a three-game suspension imposed by MLS, which ends at 8 p.m. Friday when the Sounders (9-7-2, 29 points) host D.C. United (10-5-5, 35 points), leader in the Supporters’ Shield race.

Besides being eliminated from Open Cup play, the Sounders in MLS play lost 2-0 to San Jose, 1-0 to Philadelphia and 4-1 to Portland. The Sounders have won once since the end of May.

Not all, or even most, of the ineffective play is attributable to the absence of Dempsey, but injuries and national-team callups that have contributed to the slide are the setbacks standard in any season.

Dempsey’s pout was not. For a 32-year-old to revert to adolescence and invite serious consequences to his team and, potentially, the national team on the eve of this month’s Gold Cup is either stupidity or arrogance. I’d guess it’s a strong dollop of both. That was underscored by his terse tweet of apology that was quite a bit less than contrite:

I would like to apologize for my actions in the U.S. Open Cup.

Yes, officiating is probably the weakest link in the entire MLS enterprise. Yes, bad calls happened at Starfire. But for a veteran, world-class leader to give in to impulse and damage his team for weeks and potentially the season is industrial-strength knuckleheadism.

U.S. coach Jurgen Klinsmann would have been entirely within reason to suspend Dempsey from USMNT for the Gold Cup. Instead, he issued a grandfatherly scold and took away dessert from Dempsey’s national-team feast.

“I had a very, very good conversation with Clint about what happened during the Open Cup, but also about how we want to approach things,” Klinsmann told U.S. Soccer. “For the time being, we thought it’s the best thing to give the captaincy to Michael Bradley and let Clint focus on what he’s all about. Clint is all about scoring goals.

“We need Clint Dempsey badly with the National Team. We need him in a good spirit.

“What happened was a mistake, but it was the first red card in his career and a lot of people went at him. I think the best thing for everyone right now is to let him concentrate really on playing and doing what he does best.

“It’s his performance on the field. It’s his delivery for the U.S. National Team, and he has always delivered. He’s at 40 goals for his country and I told him I want him to score many, many more. Hopefully in this summer’s Gold Cup he becomes the top scorer in the tournament. We need Clint in a free spirit, and that’s why we decided to kind of take that captaincy and move it over to Michael for the Gold Cup and then we’ll see.”

Certainly, Klinsmann is right — Dempsey is about scoring goals. And that seems to be it, too. For U.S. Soccer to worry about his “free spirit” and not hold its captain more accountable for reckless behavior is to green-light him for more. Letting him “do what he does best” while all but forgiving what he does worst inspires contempt from anyone who cares at all about standards of professional behavior.

When Schmid, Klinsmann, Lou Piniella or any coach/manager gets tossed from a game, it rarely impacts an outcome. When the star gets blown out for weeks for no good reason, it’s a big deal. Which is why sports leagues often like to excuse nonsense like this, because to stand for something more than wins hurts business.

As U.S. Soccer did after the recent disclosures about USWNT and Seattle Reign FC goalie Hope Solo’s belligerent behavior with police upon her arrest for domestic violence against her half-sister and a nephew — behavior corroborated by the sister on a national-TV interview — the organization says, by not admonishing Solo, winning comes first, second and third, and everything else is tied for last.

Dempsey scores goals superbly. Solo stops goals superbly. They also do things that embarrass themselves and teammates and potentially compromise team outcomes because they feel no overriding desire for self-control, since U.S. Soccer allows the players to think they are bigger than the industry.

This isn’t about setting poor examples for kids. Most 12-year-olds already know what Dempsey and Solo did was self-destructively stupid. This is about believing that your responsibilities to teammates, coaches, fans and sponsors are important enough to check your feelings of invulnerability marbled with persecution at the saloon door.