A three-game losing streak ended, barely, when Tyrone Mears scored in the 88th minute to provide the difference against D.C. United, MLS’s top team, Friday night at the Clink. 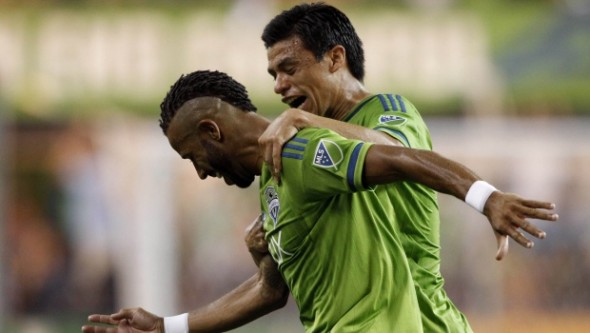 Tyrone Mears’ first goal in five years was a timely one. / Sounders FC

Despite going up a man in the 27th minute, the game-winning goal proved to be a long time coming  — both for the Seattle Sounders and goal-scorer Tyrone Mears, who smashed home his first golazo in more than five years as the home side snapped a three-game skid against D.C. United Friday night at the Clink.

“D.C. worked really hard,” said Mears after the match. “You can see why they’re top of their division . . . We had to keep believing. We knew that we only needed one chance.”

The chance was hard to come by. Seattle (10-7-2) entered the match with a partially rejuvenated lineup, with Chad Barrett returning for his second game back from a leg injury, and midfield sparkplug Osvaldo Alonso, who had not played since May 31. Yet the Sounders struggled to connect on their final balls on the offensive third, and even seemed outplayed at points by the reduced D.C. squad.

The first half proved eventful in every category but the score column. D.C. (10-6-5), tops in the Supporters’ Shield standings, were forced to use their first substitution in the fifth minute, as forward Luis Silva needed to be subbed off with a groin injury. The Black-and-Reds lost their other starting forward in the 27th, when Fabian Espindola was shown a straight red for an apparent elbow launched at the head of Sounders center back Zach Scott.

Minutes later, Stefan Frei was run into while attempting to collect an airborne free kick, and he landed awkwardly on his left shoulder. Frei was pulled off in favor of his replacement, Troy Perkins, in the 45th minute, Frei headed straight to the dressing room before the break.

Mears’ goal came as a nil-nil draw looked all but certain. In the 88th minute, a long cross from fellow outside back Dylan Remick sailed over the heads of the players in the box, curled away from the goal mouth to the right side of the box and landed in front of Mears.

Mears stepped up to the ball and hammered it with his right foot, sending it curling into the upper corner of the far side of the net to lift his side to victory. The goal was just the eighth of his professional career. He last scored for then-Premier League-side Burnley in 2010.

“It was a little bit (of a struggle)  tonight,” said Sounders head coach Sigi Schmid. “We wanted (Mears) to get forward a little bit more which he did . . . we felt that him and Remick could definitely have a bigger impact on the game.”

The three points snapped a run of poor results that had seen the Sounders lose four consecutive matches in all competitions.

With Frei’s status uncertain, and three regular starters missing on international duty for the CONCACAF Gold Cup (Clint Dempsey and Brad Evans for the U.S., and Marco Pappa for Guatemala), the momentum from the result may prove important as the Sounders will look to recapture their table-topping form in the weeks to come. Next game is in Chicago July 11.