Despite a poor outing, RHP Taijuan Walker was set to pick up his sixth consecutive win. Then Fernando Rodney blew it. Then Robinson Cano delivered a walk-off winner. 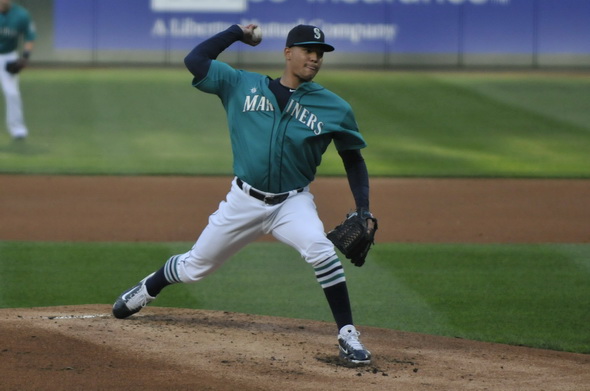 It came with one out in the top of the second inning on a 3-2, 95-mile-per-hour fastball to Tigers C Alex Avila. Ball four. Take your base. No big deal. The game was scoreless and Walker, 6-1 with a 1.68 ERA over his past seven starts entering Tuesday, was cruising in another effort sure to affirm his rebound from a disastrous first two months of the regular season.

Light-hitting 3B Nick Castellanos followed the walk by lining a two-run homer over the wall in center. Then 1B Marc Krauss, batting .133, followed with a solo shot to right to give the Tigers a 3-0 lead.

Walker continued to stagger, allowing five runs in six frames. But his start was long forgotten by the time 2B Robinson Cano lined a walk-off single in the 11th to give the Mariners a 7-6 win Tuesday night at Safeco.

It was Cano’s sixth career walk-off hit — first with the Mariners — a further indication he may be over the prolonged slump that’s handicapped the disappointing Mariners (39-45) most of the season.

If they make a playoff push, Walker, like Cano, must be better.

Facing a Tigers team that piled up 19 hits in Monday’s 12-5 win, the 22-year-old right-hander gave up a another homer, a two-run shot by Avila in the fourth. That merely tied the game at 5, because the Mariners had five runs in the third, chasing Detroit starter Kyle Ryan after 2.2 innings.

Seattle’s outburst came when CF Austin Jackson checked in with his first career grand slam, followed by Franklin Gutierrez with his first homer since Sept. 27, 2013.

The walk was also a sign that he wasn’t especially sharp. The three homers tied a career high. But he pushed through six innings despite allowing six hits, hitting a batter and striking out three. He threw 87 pitches, 56 for strikes, en route to the no-decision, which snapped his five-game winning streak.

“They’re a really good hitting team,” Walker (7-6) said after his ERA jumped to 4.53. “They’re hitting .280 as a team for a reason. I feel like my stuff was pretty good, my fastball command was pretty good, but when I missed even a little bit, they did damage.”

When Cano’s solo homer in the fifth gave Seattle a 6-5 lead, Walker made it through the top of the sixth, no small feat on a night his fastball looked flat.

“I think at this point, it’s not stage fright or culture shock when things don’t go perfectly for him,” acting manager Trent Jewett said pre-game of Walker. “It’s gather yourself, get yourself together and be better than the competition.”

Walker didn’t do that early in the season.

“I’d give up a couple runs like that, and I would fold,” he said. “Getting through six was huge.”

That wasn’t a problem in spring training, when Walker went 4-0 with a 0.67 ERA to win a spot in the rotation. It marked another step forward after he finished an injury-riddled 2014 with a strong final start — eight innings, one run — in a 1-0 loss Sept. 24 to the Blue Jays in Toronto.

When the 2015 regular season started, Walker kept getting shelled. Then he recommitted to throwing his fastball. It worked well until Tuesday night.

“I think it kind of stunned us all,” pitching coach Rick Waits said of Walker’s early-season struggles. “I give him a lot of credit. He didn’t worry too much about it. He had some moments any young guy might have but he decided, ‘You know what, I got to get better.'”

Walker was ready to pick up his sixth consecutive win until sometimes-closer Fernando Rodney entered in the eighth and gave up a homer to Cuban outfielder Yoenis Cespedes, tying it at 6.

The Mariners’ annual “Bark at the Park” night Thursday is sold out after the club capped the special sections (341-347) at 500 dogs. Ticketed participants get a Mariners headband and collapsible water dish. After the game, dogs and their owners are invited to walk around the bases . . . Injured LHP James Paxton played catch off flat ground Tuesday as he continues his recovery from a strained left middle finger. He’s been on the disabled list since May 29 . . . Cano has four homers in his past 14 games after hitting two in his first 67.  In July, he is 12-for-30 (.400 batting average) with two doubles, two homers and five RBIs.