Thiel: What if the Mariners had rested Cano?

The Mariners lost another close game, and close series. After news that Robinson Cano was dealing with a treatable illness since August, the question rises as what could have been done differently. 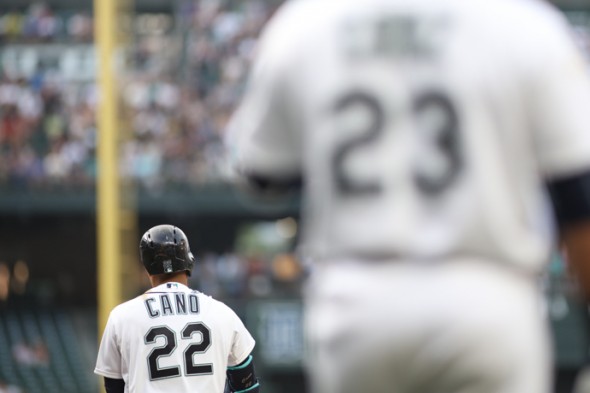 Just when it’s possible to think that the outside hob-goblins — marine layers, intestinal parasites and slow roof closures — have run their course through the Mariners, the hitters Wednesday go 0-for-14 with runners in scoring position.

The default position for the 2015 Mariners: Error 404, hits not found.

So the Miguel Cabrera-less Detroit Tigers won the game, 5-4, the series 2-1, and the Mariners won a participation ribbon for joining the Tigers in tying the Safeco Field record for most combined homers (14) in a three-game series. Big deal.

Since Detroit had nine, including one Wednesday by rookie 1B Jefry Marte in his first MLB start, the Tigers won the sort of close series that could have gone either way, as so many Mariners series have been, in a year of remarkable American League parity.

“We can certainly be more efficient in those spots,” said interim field boss Trent Jewett, referring stiffly to the RISP skunk. “I don’t think it’s completely uncommon to us. It’s happened previously.”

No kidding. A team doesn’t get to be last in runs scored without being consistent. And don’t worry, Jewett — no one is blaming you. Manager Lloyd McClendon returned to the clubhouse at game’s end Wednesday after attending the funeral of his sister, and he’s only a lesser culprit.

OF Dustin Ackley, who hit a two-run homer to tie the game at 4-4 in the fourth inning but stranded runners in his next two at-bats, relied upon a familiar crutch to explain the hitting woes.

“Sometimes the situation gets the best of us and we do too much,” he said. “We try to win it ourselves instead of keeping it simple.”

While that can be true for many hitters on many clubs, why is it so often true in this half-season for the Mariners, especially for a lineup with plenty of MLB experience?

It’s hard to know, but now that 2B Robinson Cano seems to be recovering from his previously undisclosed bout with an intestinal parasite and acid reflux, the question needs to be asked:

Could Cano have been rested in order to bring him back healthy sooner?

I requested GM Jack Zduriencik Wednesday to answer the question, but I was told he wasn’t available.

So I have to rely on his quote given to reporters Monday after USA Today broke the story Sunday that Cano owned up to the disorder in a Spanish-language conversation with a reporter.

“Of course, we knew about this, but Robby hasn’t made excuses,’’ Zduriencik said. “He’s tried to be a pro about it. He’s gone about his own business the best way he can. Hopefully, it’s behind him and it’s manageable, and he can play baseball the way he wants to play baseball and the way he’s capable of. ”

Tried to be a pro? If a player is holding back information that is compromising his play, that isn’t being a pro. Of course, the macho imperative is understood: A player, especially one making an annual $24 million, does not stop unless bone is sticking out. But still, the club has to be prepared to override a player’s emotions for the greater good.

The problem began in August, and presumably impacted his poor September when the Mariners just missed the playoffs. Its impacts lingered apparently until recently. Before a 1-for-5 day Wednesday, Cano in July was hitting .400 (12×30) with two doubles, two home runs and five RBIs. Since June 9 he was hitting .284 with an OPS of .811.

Perhaps because he turned a health corner, he felt comfortable in disclosure. But maintaining the mystery for most of his worst year as a pro, opening him to criticism and his teammates to additional pressure, calls into question whether he and the club did the right thing by allowing him to continue to play — especially if the conditions he described were accurate.

“It still affects me,” Cano told USA Today. “Sometimes you drink water and it makes you feel like vomiting. I can’t eat the same way I did. It’s hard to deal with, especially being the first time this has happened to me. Sometimes I eat only once a day before playing, because I feel full. And you just don’t have the same energy.”

Acid reflux is a condition known to millions and is treatable. Many continue to work despite its effects. But at the level Cano is paid to play for a 162-game season, much is asked of him. Maybe too much.

From the outside, it’s hard to say. Lots of players go through emotional and/or physical problems either they or the clubs decline to disclose. It’s competitive. That’s understood.

But the Mariners are all in to win this year, and when their No. 1 offensive guy contributes for most of three months at a Bloomquistian level, that’s a serious problem. Resting him will cause controversy, as will playing him at a sub-par level.

Unfortunately for him, he’s joined a club with a long history of dubious personnel moves, so hard-earned skepticism greets every move.

I believe the Mariners brought all medical resources to bear, and I believe Cano insisted on playing. But when the Mariners offer an 0-for-14 RISP faceplant as they so often have this season, continuing to thwart an otherwise talented group still managing to stay on the playoffs periphery, everything gets called into question, especially when it’s draped in mystery the club has yet to address.