Mariners a longshot to make the playoffs

After stumbling to a 40-46 record, the preseason-darling Mariners near the All-Star break needing to go 50-26 to reach 90 wins, while crawling over eight teams ahead of them. 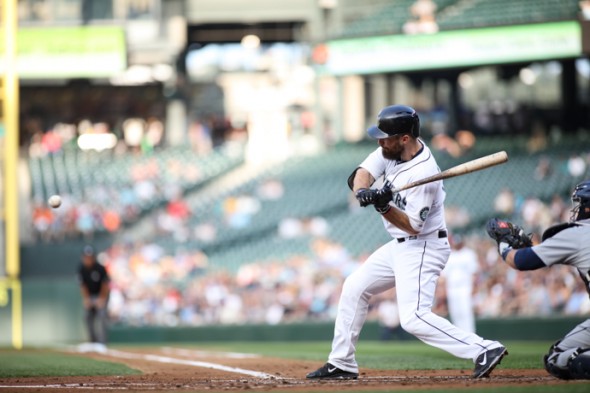 OF Dustin Ackley has been one of the many disappointments for the underperforming Mariners. / Drew McKenzie, Sportspress Northwest

If the Mariners have any hope of a second-half surge to put them back in the American League playoff race, they must start winning at an unprecedented clip.

After Thursday’s 7-2 victory over the Angels, the Mariners are a pedestrian 40-46, treading water since a disastrous 2-9 homestand from May 28-June 7 put them seven games under .500.

Three weeks from the trade deadline, a realist sees long odds of Seattle making the playoffs.

That might be manageable if this team has a two-week hot streak or, say, win five games in row a few times. But that appears a Herculean task — the club’s longest winning streak is four.

The most likely scenario is they end up somewhere in the middle. Yes, they’ve underperformed. But the anemic hitting with runners in scoring position, if the sabermetric crowd is right, should even out as the season progresses.

The thought was the off-season additions of reigning home-run king Nelson Cruz, Justin Ruggiano, Seth Smith and Rickie Weeks would take the offense from bad to average, while the pitching would continue to dominate as it did in 2014.

Of course, the 2015 offense is last in the AL in almost every category that matters. Last month, they fired hitting coach Howard Johnson and replaced him with franchise icon Edgar Martinez.

Yes, Seattle pounded out a season-high 19 hits Thursday, most since May 2012, but problems still exist up and down the lineup.

Former No. 3 overall pick C Mike Zunino, expected to make a positive jump in his second full big-league season, is worse, flailing at a historic clip with a .167  batting average. Ruggiano is in Tacoma. Weeks was DFA’d. Cano, despite a recent surge, still has acid reflux. And Ackley, a former No. 2 pick, flickers but never flames.

The bullpen, with Brandon Maurer, Yoervis Medina and Dominic Leone traded and the struggles of Fernando Rodney, Tom Wilhelmsen, Tyler Olson and Danny Farquhar — and now with Charlie Furbush on the 15-day DL — isn’t the shutdown force it was last season. Rodney lost his closer’s job and the rest have been demoted at least once or dispatched.

The re-acquisition of Mark Lowe and Joe Biemel and the development of Carson Smith have helped avert disaster in the pen.

Starting pitching continues to keep the Mariners in games when they have no business being in games. Since LHP Mike Montgomery was recalled from Triple-A Tacoma to replace James Paxton (injured middle finger) in the starting rotation, he is 4-2 with a 1.62 ERA in seven starts, including back-to-back shutouts against the Royals and Padres in late June.

Ace Felix Hernandez, a winner Thursday, was named to the American League All-Star team for the sixth time despite an uncharacteristic June (2-3, 5.51 ERA in six starts). RHP Taijuan Walker (7-6, 4.53 ERA), outside of Tuesday’s five-run hiccup against Detroit, pitched like an All-Star the past few months by rededicating himself to a fastball that regularly reaches the upper 90s.

In his first start Monday after missing most of the first half of the season with a strained right lat, the 34-year-old allowed four solo homers in a 12-5 loss to the Tigers.

If Iwakuma or Happ falter, the Mariners have Cuban southpaw Roenis Elias waiting in Tacoma. He was solid before Montgomery’s out-of-nowhere emergence essentially forced him out of the rotation.

Paxton, once the most promising of the “Big Three” pitching prospects, is throwing from 75 feet and will be back later this season if he doesn’t have another setback. A healthy Paxton would be better than a trade deadline deal for rotation depth.

Pitching is a moot point if this team doesn’t hit.

The Mariners in the last week called up OF Franklin Gutierrez and DH/1B Jesus Montero from Tacoma in a desperate attempt for production. Both hit well in the PCL, but are limited in the field.

For all the free agent money spent to improve a team that won 87 games a year ago, the Mariners nearing the All-Star break have regressed. And they still don’t have a backup catcher with more than one hit.

But the Mariners must find a way to generate a major-league average offense if there’s any hope of ending their 14-year playoff drought.