Seattle and the NHL — land mines on horizon

Seattle’s 1989 attempt to acquire an NHL franchise provides an object lesson on why it has been so difficult for the city to become a league market. 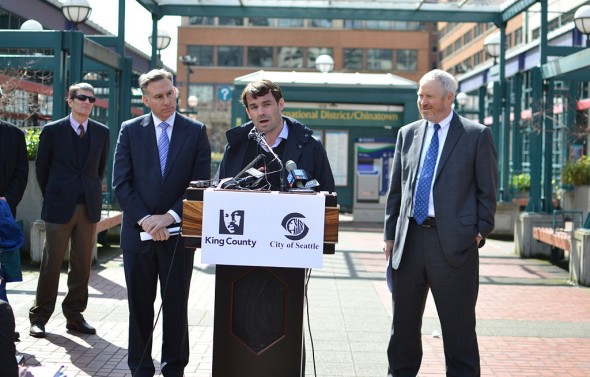 At least three Seattle-area investor groups interested in acquiring a National Hockey League team are in receipt of expansion applications that will cost $10 million apiece to fill out — with $2 million non-refundable.

If Ray Bartoszek (Tukwila), Chris Hansen/Victor Coleman (Sodo) and either one or two unidentified parties in Bellevue opt to proceed, they will get a chance to own a club for an outlay of $500 million.

If Seattle’s previous tango with the NHL is any guide, now comes the hard part.

In 1989, another group of investors with Seattle ties jumped at a chance to acquire a franchise when the NHL announced a two-city expansion for the 1992-93 season. Eleven investor groups in 10 cities (two in San Diego) applied. At the time, the league charged $100,000 for a simple application, $35,000 non-refundable.

That apparently suited Seattle Thunderbirds owner Bill Yuill, Bill Ackerley of Ackerley Communications (owners of the NBA Sonics), former Seattle Totems official Bill MacFarland and Microsoft executive Chris Larson enough to proceed. They all gagged at the $50 million expansion fee, which was at least $5 million more than the highest-valued NHL franchise of the day.

The NHL told Yuill et al that if it accepted the application and awarded a franchise, they would have to fork over a $5 million down payment in 30 days and would be on the hook for two installments of $22.5 million each, payable in June and December of 1990 to complete the deal.

Intent on adding hockey to the Seattle sports mix, Yuill et al bulled ahead, as Bartoszek, Hansen/Coleman and perhaps Bellevue are expected to do now. But the 1989 investors soon found draconian the NHL’s additional requirements for a franchise.

They provide an object lesson on why it has been – and will continue to be — so difficult for Seattle to become an NHL market.

The $5 million down payment, the NHL declared, would be forfeited if the new ownership group failed to sell 10,000 season tickets within a year. Among 1989 Seattle investors, that caused a major pause. Then in their 21st of 41 seasons, the Sonics never had more than 9,000 season-ticket holders.

The NHL further demanded that season ticket sales generate at least $9 million annually, which translated into an average ticket price of $22.50.

According to 1989 NHL requirements, a expansion team had to either own its own arena or have a 20-year lease with what the NHL described as a “substantial” (the NHL didn’t define substantial) share of revenues from concessions, parking and advertising signage.

None of the 1989 investors owned an arena, although the Ackerleys were planning a new one, nicknamed “Ack Dome,” slated to go up in Sodo.

Sonics owner Barry Ackerley, who sought to become a minority hockey owner to max his investment, balked at taking a “substantial” share of concessions, parking and advertising signage away from his Sonics and giving it to a new hockey team. And he especially didn’t want to share luxury box revenues, denied him at the aging Seattle Coliseum (now KeyArena).

The NHL further mandated that Seattle investors secure a $5 million line of credit – we can only speculate on what that sum would be today — in the event the league had to take over the team.

The NHL also stipulated that an expansion franchise receive priority status in postseason arena dates. Whether the Sonics continued in the Coliseum or relocated to the Ack Dome, Ackerley wasn’t about to give an expansion hockey club, even one in which he had a minority interest, more favorable playoff dates than he gave his Sonics.

Sure, Ackerley chopped down city-owned trees that obscured Ackerley Communication’s billboards, but he wasn’t stupid.

For a moment, put aside today’s application fee ($10 million), franchise cost ($500 million), terms of payment (whatever they may be), letters of credit, concession and parking revenue, and luxury-box income. Assume that arena construction, on Bartoszek’s Tukwila site or Hansen’s Sodo parcel, is not an issue, even though it most assuredly is.

If the NHL does today what it did in 1989 — and there is no reason to suspect it won’t — it will demand that an expansion team receive priority playoff dates in whatever arena is constructed — especially in the absence of an NBA team.

Ten NBA and 10 NHL franchises currently share an arena, notably Madison Square Garden in New York and the Staples Center in Los Angeles. The NBA says what goes in all of them.

All of Seattle’s potential investor groups must satisfy NHL franchise requirements in order to get a team, but do so without creating roadblocks for an NBA expansion or relocation. That won’t be easy if the NHL runs this expansion process the same way it ran the one in 1989.

And the current process has started out exactly like 1989.

Back then, the investors ultimately split into two camps, the Ackerleys in one, Larson and McFarland in the other. And then they loosely joined forces in order to present a united bid.

Since they believed – incorrectly, as it turned out – that the NHL wanted Seattle as part of plan to add more West Coast teams, they figured they might be able to negotiate the NHL’s $50 million expansion fee down to something more reasonable, into the $35 million range — that based on sales prices for the Minnesota and Hartford franchises the previous year.

“A lot of people are looking at whether a $50 million expansion fee can be done,” Chicago investment banker Bill Lear, who helped assemble the Seattle ownership group, told the New York Times.

“The NHL has set some standards that will be very difficult to achieve. I can’t get inside the (NHL) board’s heads and say what kind of tradeoffs they will make. But I can say they will have to make concessions.”

The NHL made none because, as it developed, it had a couple of fish on the line willing to be hooked and gutted.

Even so, Seattle’s attempt to acquire an expansion team remained alive in late November after the 11 ownership groups from 10 cities had been whittled to four candidates. But the whole thing fell apart Dec. 5 when MacFarland, Larson, Barry Ackerley and Lear traveled to West Palm Beach, FL., to meet the NHL’s Board of Governors at the Breakers Hotel.

They went there to present their case for acquiring a team, but came away with nothing in one of the great mixups/mishaps in Seattle sports history.

Even if that epic boobery hadn’t occurred, the Seattle bid group was not willing to meet the NHL’s expansion requirements despite having the economic net worth to do so. It determined the NHL and Seattle was a bad marriage under NHL-imposed conditions.

“Our first mistake was we misread the league’s rationale for expansion,” MacFarland said, along with a lot of people who thought the first thing they (NHL) were after was a good regional spread to attract a bigger and better TV contract, then West Coast teams to help out the existing teams and lessen their travel costs.”

“The last thing we figured was that they were just after the money. But it turned out that money was the most important factor.”

As it will be this time around, based on the NHL’s own history.

The second mistake, according to MacFarland:

“We should have made our own bid instead of a loose allegiance with Ackerley’s effort. The NHL (expansion) board called us all after presentations and said, ‘If you can pay the price, you can have the franchise.’ We couldn’t. We wouldn’t. Ottawa and Tampa (neither with an NBA franchise) did, so they got the franchises.”

MacFarland made a key point when he said, “We were not able to negotiate a lease deal such as the NHL required.”

He was referring to concession-parking-signage-luxury box splits and priority playoff dates — the same land mines awaiting Chris Hansen, Ray Bartoszek and Seattle’s other NHL suitors as they enter the sporting equivalent of the Mekong Delta – and they don’t even have arenas yet.

So don’t submit your entry into a “Name The Team” contest just yet.