Mariners’ McClendon: ‘We got to change things’

After a lifeless, sloppy 10-3 loss Sunday to the Angels, Mariners manager Lloyd McClendon called it “the worst game of the year” and vowed to make changes. 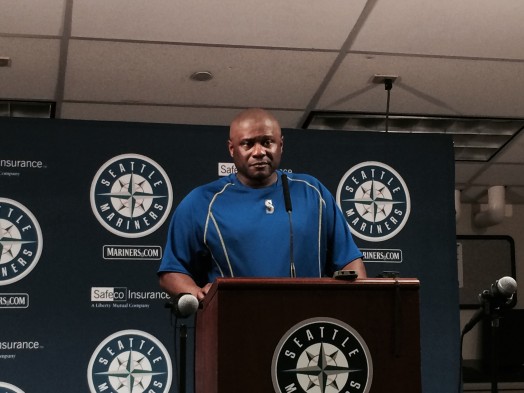 That’s the look of a manager that just watched his team commit three errors and lose by seven runs. / Adam Lewis, Sportspress Northwest

Win. Lose. Repeat. So it goes for the 2015 Seattle Mariners.

In their final game before the All-Star break, they were a special brand of awful. The sloppy 10-3 loss to the Anaheim Angels Sunday afternoon at Safeco Field (box score) was so filled with miscues that manager Lloyd McClendon issued a post-game challenge to his players.

Get better. Or face consequences.

“Listen, I’ve given my club a lot of string and allowed them to do a lot of things, but it’s not working,” McClendon said after the Mariners fell to 41-48. “We got to change things.”

“You try to stay positive and encourage your club but maybe it takes prodding of a different nature,” McClendon said. “If that’s the case, then that’s what’ll happen.”

He had reason to be irked.

The Mariners committed three errors, didn’t mount any offense until they trailed by 10 runs and RHP Taijuan Walker wasn’t sharp — seven runs (six earned) in five innings — in what’s been a wildly up-and-down year for Walker and the Mariners.

“It was a very bad performance on our part,” McClendon said. “In a lot of ways, it was very embarrassing. We’re much better than that and we will play better than that.”

The Mariners (41-48) had a chance to enter the break on an uptick after an impressive 5-0 win Saturday night. Instead, they finished another homestand with a losing record (3-4) and dropped to 20-27 at Safeco Field. Instead, they continued an inconsistent July and settled for a series split.

“That’s been the case for us the entire first half,” McClendon said. “We’ve taken one step forward and two steps back . . . But a lot of that is our own doing. We got to get better. And we got to start stringing together wins. And that’s the message I’m going to start sending my club the second half.”

Asked to specify what must improve, McClendon said “a lot of things.” If the Mariners are to re-enter the playoff discussion, they need more from an AL-worst offense, which went 1-for-6 Sunday with runners in scoring position.

“I still like what we see. We still got a good group in here,” 3B Kyle Seager said after going 3-for-4 with a double and an RBI to extend his hitting streak to six games. “We still go into each series and you like our team. Nothing like that has changed.”

But performances like Sunday give pause to wonder if they’ll be 10 games out by the Julye 31 trade deadline. After four days off, the Mariners begin Friday with a three-game series in New York against the Yankees, then to Detroit for a four-game set against the Tigers.

Sunday, the Angels jumped ahead 1-0 with one out in the second when 2B Robinson Cano, with the infield in, allowed a Matt Joyce ground ball to get by him. Another run scored on Walker’s wild pitch.

“I thought it was going to bounce,” Cano said of the fielding error. “It stayed down. That’s a situation where you want to be able to make a play.”

In the third, Mariners tormenter Erick Aybar hit a two-out double down the left-field line. Mark Trumbo fielded and threw wide of home, allowing Mike Trout to score from first. Walker, backing up the throw, fired wide of the plate.

Cano, backing up Walker’s misplay, threw home and barely nabbed Aybar before he scored a gifted inside-the-park homer. The out call was upheld after Angels manager Mike Scioscia asked for an instant replay review.

“We caught a break because we got a guy out at the plate,” McClendon said.

Still, it was 3-0. The tone was set. The Mariners looked like they started the break a day early.

It came apart for Walker in Anaheim’s six-run sixth. After drilling Trout in the shoulder with a fastball to start the inning, Albert Pujols followed with a single. Aybar then laid down a sacrifice bunt. Instead of taking the easy out at first, Walker fielded, spun and threw wide of third and down the left-field line as Trout came around to score. David Freese then doubled off the top of the wall in center, driving in two to make it 6-0. That ended Walker’s uneven day.

“It was just one of those days,” Walker said after allowing at least five runs in each of his past two starts. “I felt like I had really good stuff. Everything was working really well. I just had that throwing error in the sixth and it kind of went downhill from there.”

The first-round pick by the Marlins out of Oklahoma State (2012) began the season as the No. 1-ranked prospect in the Angels organization, according to Baseball America. Since being recalled from Triple-A Salt Lake, Heaney has four consecutive quality starts.

Sunday was his best. Heaney (3-0, 1.32 ERA) pitched a seven-inning shutout, allowing five hits, striking out six and walking one.

The Mariners trailed 10-0 in the eighth when LF Dustin Ackley checked in with an RBI groundout. Seager added an RBI single to make it 10-2. Pinch-hitter Seth Smith led-off the bottom of the ninth with a homer, his eighth.

That didn’t ease the sting of another botched opportunity.

“We just played the worst game of the year,” McClendon said. “I can’t imagine a better time for a break.”

Injured LHP Charlie Furbush (left biceps tendinitis) will throw during the break and likely accompany the team to New York for the July 17-19 series against the Yankees, McClendon said. The tentative plan is for Furbush to progress to bullpens, then throw a simulated game when the Mariners go to Detroit July 20-23 . . . Before landing on the 15-day disabled list, Furbush was 1-1 with a 2.08 ERA and 0.65 WHIP in 33 games  . . . Injured LHP James Paxton said he still feels stiffness in his strained left middle finger, but he’s making progress and playing catch in his throwing program . . . LHP David Rollins allowed a two-run homer to C Chris Iannetta in the sixth . . . Reliever Danny Farquhar was optioned to Triple-A Tacoma after he pitched 1.2 scoreless innings and allowed two hits Sunday. The Mariners have yet to make a corresponding roster move.