Rookie Cristian Roldan, a former Washington Husky, and Sweden’s Erik Friberg, a Sounder in 2011, are among those being counted on to to stop a Sounders skid that includes four losses in five games. 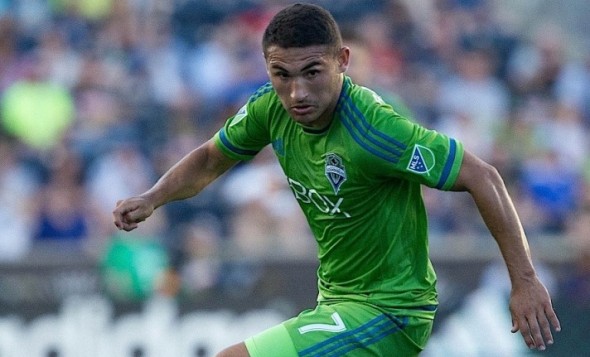 Cristian Roldan, who played for the Washington Huskies a year ago, is being asked to step up — fast. / SoundersFC.com

TUKWILA – Entering the week after a loss to the last-place Chicago Fire, it seems more lineup shifts are on the way for a Sounders squad that scored one goal in its past five league matches.

Recent lineups have at times resembled a game of three-card monte. Injuries, national team call-ups and one suspension courtesy of a Clint Dempsey tantrum have meant a test of depth in the last month. Results have not been what the Sounders might have hoped.

“We need others to step up,” said head coach Sigi Schmid Monday. “Does that mean making some changes. . . . leaving it to some other guys to go? Maybe that’s what needs to happen.”

Rookie Cristian Roldan has been called upon to take a regular starting position in the midfield, though his precise placement has shifted considerably in recent matches. Roldan, 20, played for the University of Washington before forfeiting his eligibility to enter the 2015 MLS SuperDraft and was selected with the 16th overall pick by the Sounders in January. The rookie spoke about pressures facing the younger players.

“The coaches expect a lot from us,” Roldan said Tuesday. “They have confidence in us. We’ll get harped on a little bit more than the other guys because we’re just young guys and we’re inexperienced.”

Still, Roldan has displayed an eagerness to compete and improve.

“Anywhere in the midfield is ideal for me,” he said when asked if he was playing his natural position. “I’ve been asked to play different roles, but I’m very happy to play any position.”

Roldan has shown skill as well. His long-range attempt that struck the crossbar against Chicago was arguably Seattle’s best chance of the evening, and would have been a highlight-reel first career goal had it struck true.

“(I need to improve) my first touch and be always looking forward and know what’s going on in front of me,” he said. “I think those two things will make me a better player not just in the short term, but in the long run as well.”

The Sounders also welcomed the official return of veteran Swedish midfielder Erik Friberg  Tuesday. Friberg played 26 matches for the Sounders in 2011, where he quickly became a fan favorite due to his easy-going nature and intelligence in distributing the ball.

The 29-year-old midfielder re-signed with Seattle in late June, and has spent the last several weeks dotting i’s and crossing t’s on his visas and eligibility forms before participating in his first training session Tuesday.

“I’m excited,” said Friberg Tuesday. “I know a lot of guys from 2011, so it’s a little bit easier, but now I just need to get to know the guys who did not play when I was here.”

Despite Friberg’s excitement, he harbored no illusions about his fitness. Friberg admitted that he would need a couple of weeks to get back in shape, while Schmid described him as at “about 75 to 80 percent” of the way to being match-fit.

In the meantime, the opportunity for the Sounders to re-stake their claim as the best in the West against Colorado will fall on the shoulders of the players available. That list is unlikely to include keeper Stefan Frei or 2015 MLS All-Star selection Obafemi Martins, both still recovering from injury.

For at least another week, then, the cards in the deck will continue to be reshuffled.