A light night for Mariners at the All-Star Game

Hernandez is perfect, Cruz was 0-for-2 and the American League won 6-3, assuring the Mariners of home-field advantage in the World Series. 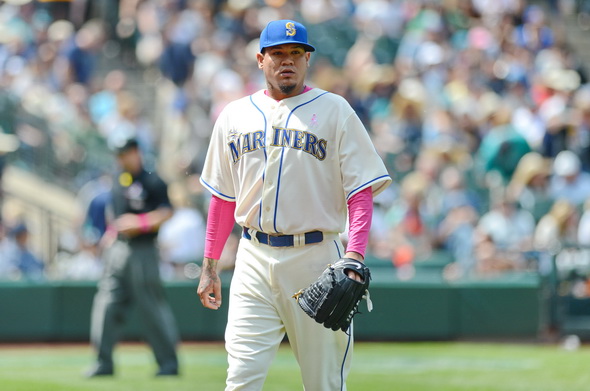 The Mariners’ impact on the 86th MLB All-Star Game Tuesday in Cincinnati’s Great American Ball Park was light: RHP Felix Hernandez pitched a 1-2-3 third inning, and DH Nelson Cruz struck out and flied out in his only two at-bats.

Manager Lloyd McClendon, an American League coach, during pre-game introductions tipped his hat nicely. He also smiled slightly, something he probably hasn’t done since Sunday’s ghastly 10-3 home loss to the Angels that ended Seattle’s first half with a thump like a drunk losing his grip on the lamppost.

Another person with a Seattle connection probably had the most notable face time: Ciara, girlfriend of Seahawks QB Russell Wilson, sang the national anthem. For the record,  she finished the song to the last note. And she’s had more major league baseball action than Wilson.

The American League beat the National League 6-3, assuring the Mariners of home-field advantage in the World Series. Having completed the difficult part, the Mariners have the easier task of getting there.

Mariners nemesis Mike Trout of Anaheim, with two hits, was named MVP, the first player to win consecutive MVPs. He led off the game with a homer, the fourth to lead off an All-Star Game in the event’s history. Six players in ASG history, including Trout, have hit a leadoff homer in the first inning, top or bottom. Bo Jackson in 1989 was the most recent.

Perhaps the most noteworthy fact in ASG 86 came once the rosters were set: For the first time in the game’s history, neither a Yankee nor a Red Sox was in the starting lineup.

There are baseball gods.