In 2014, the Mariners’ bullpen was the best n the business and a major reason they almost made the playoffs. This year, they’re underperforming along with the offense. 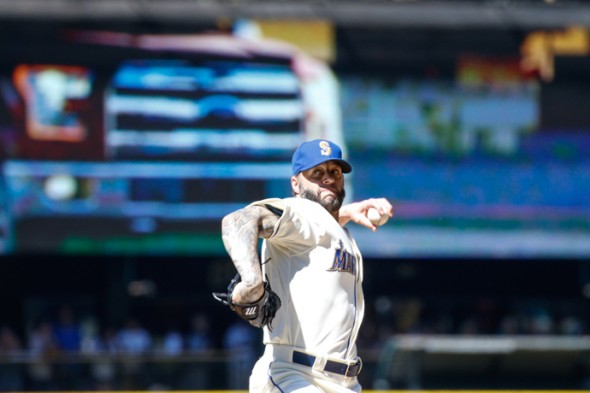 Veteran southpaw Joe Beimel has been solid in 2015, but the Mariners bullpen has taken a step back after dominating opposing lineups last season. / Drew McKenzie, Sportspress Northwest

So much went wrong for the Mariners from April to mid-July, it’s tiresome to dissect how they entered the All-Star Break at 41-48, with the second-worst record in the American League.

There was veteran second baseman Rickie Weeks’ failed attempt to become a left fielder before he was cut in June. There was 2B Robinson Cano, making $24 million this year, posting a pedestrian .660 OPS and making a series of lackadaisical baserunning mistakes that a stomach parasite and acid reflux couldn’t explain away.

There was LF Dustin Ackley again struggling at the plate the first few months. 1B Logan Morrison, a needed power source, drove in 33 runs and hit below .230.

There was the offensive regression of C Mike Zunino; yet another injury to LHP James Paxton, once thought of as the most polished member of the Big 3 young pitchers. Former All-Star RHP Hisashi Iwakuma, because of a lat injury and a failing slider, made only one decent start in five tries. There was the decision to make SS Brad Miller a super-utility player, then move him back to shortstop when his replacement, Chris Taylor, got off to a slow start.

“You can talk about your offense but, hell, the offense last year was bad,” McClendon said before an embarrassing 10-3 loss to the Los Angeles Angels at Safeco Field. “Our bullpen was outstanding and we won games because of our bullpen.

“In my opinion, the biggest disappointment to date, is right-handers we’ve had to shift in and out of our bullpen to try to bridge the gap to win games.”

Maybe McClendon was trying to deflect attention from the obvious offensive struggles. Their .236 batting average is last in the American League. They average 3.51 runs per game, 27th in the majors. They too often gag with runners in scoring position.

But McClendon is right. The bullpen has been a disappointment.

In 2014, relievers posted a 2.59 ERA, lowest in MLB. Fernando Rodney, for all his late-inning hijinks, was an All-Star closer, saving a club-record 48 games in 51 chances. Righty Carson Smith, following a fall promotion from Triple-A Tacoma, provided late-inning reinforcement. Failed starter Brandon Maurer, after a demotion to the Pacific Coast League, returned to the bigs as a reliever and showcased a new attitude and fastball that reached triple digits.

They were a prolific, colorful mish-mash of talent, the best bullpen in franchise history by almost a half-run, beating the 3.04 ERA set by a 2001 club that won 116 games and had the dominant late-inning trio of Arthur Rhodes, Jeff Nelson and Kazuhiro Sasaki.

The bullpen was expected to regress, but nobody expected about half of last season’s group to falter.

Reliever Dominic Leone (0-4, 6.35 ERA), after making the jump from Double-A Jackson last season and going 8-2 with a 2.17 ERA, has since been traded and is now laboring in Double-A. In 11 appearances with the Mobile BayBears of the Southern League (Arizona Diamondbacks affiliate), Leone is 1-1 with a 5.06 ERA.

Reliever Yoervis Medina was the eighth-inning setup man most of last season, posting a 5-3 record and 2.68 ERA. In 2015, he never came close to replicating the success.

After a May demotion to Triple-A, the Mariners traded Medina to the Chicago Cubs for backup C Welington Castillo, who was flipped a week later to the Diamondbacks in the Mark Trumbo deal. Medina, meanwhile, has been terrible (7.27 ERA in 14 appearances) with Chicago’s PCL affiliate.

Maurer is a rare success story on a disappointing Padres team after the Mariners dealt him to San Diego in December for productive outfielder Seth Smith.

Tom Wilhelmsen, aka The Bartender, pitched his way to a Triple-A demotion in early July. He is expected to be recalled after the Mariners optioned struggling reliever Danny Farquhar to Tacoma following Sunday’s shellacking.

Then there is Rodney, who lost his closer job and has since been used sparingly in late-game situations while splitting closing duties with Smith. But a recent uptick has McClendon encouraged he could return to form.

“I think he’s done a nice job for us in the role that we’ve asked him to partake. It’s tough when you’re a closer and you get demoted, but he’s been very professional about it,” McClendon said. “He’s done a nice job. I’m very proud of him.”

Notice a pattern with the struggling relievers?

They’re right-handers. And, as McClendon asserted, they failed through 89 games to match last season’s outstanding numbers.

According to The News Tribune, the Mariners were interested in signing righty Jason Frasor (1-0, 1.54 ERA), whom the Kansas City Royals DFA’d in early July. But the 37-year-old signed a deal Thursday with the Atlanta Braves, per FOX’s Ken Rosenthal.

When games are tight, the bullpen issues are exacerbated — especially when the offense struggles. The Mariners are 23-27 in games decided by two runs or fewer and have lost 13 times via the opponents’ last at-bat, tied with the Tampa Bay Rays for most in the AL.

“The right-handers in our bullpen that bridged the gap for us last year and kept games close have not,” McClendon said before citing the demotions and departures. “You can go on and on.”