A legend, a brand: Manchester United in Seattle

One of the world’s most popular sports teams, Manchester United, spent a few days in Seattle, where the twin lusts to celebrate the legend and hype the brand came into full view. 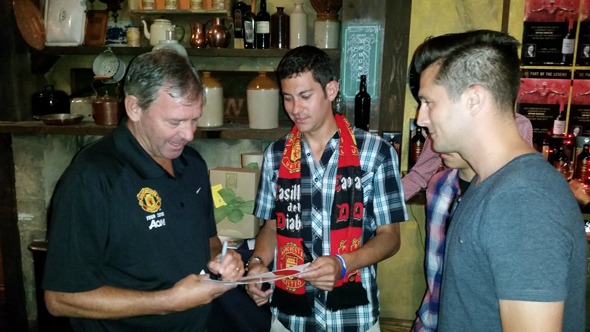 The world’s leading soccer clubs inspire a level of passion unlike anything else in sports. For Manchester United, this manifests itself in global recognition of its brand — even atop Kilimanjaro.

Any discussion of Manchester United as a club invokes a cascade of numbers: 20 titles in the English Premiership, 11 FA Cups, three UEFA Champions League titles, and $3.1 billion, the value of the club, according to Forbes.

As the world’s fifth-most valuable sports franchise (third in the soccer world, after Spanish titans Real Madrid and Barcelona), Man U is an institution to be reckoned with, in the marketplace and in the halls of soccer history. The interplay between these two facets of the club, however, is muddled, particularly in relation to its supporters. Their preseason tour in the United States as part of the International Champions Cup is no exception.

The competition is organized by Relevent Sports, a sports marketing firm founded by Miami Dolphins owner Stephen Ross. It serves as an opportunity to bring world-famous clubs to high-capacity venues filled with adoring fans, all while serving the practical need of completing preseason training.

United’s match Friday against Liga MX giants and current CONCACAF Champions League titleholders Club América fit right into the mold. Morgan Schneiderlin, who headed in the game-winning goal in the fifth minute in front of 46,587 observers, is one of United’s newest marquee players. The Frenchman recently arrived from Southampton for an estimated fee of $36.8 million.

The dichotomy between Manchester United the legend and Manchester United the brand was brought into stark relief by a fan event held at Fado Irish Pub near Pioneer Square  Wednesday. The event was organized by Excelsior Wines, the U.S. affiliate of Concha y Toro, a multi-million dollar sponsor of United, considered the “world’s most powerful wine brand” by consulting firm Intangible Business.

It was there that former captain and official club ambassador Bryan Robson told the story of his encounter with a United supporter atop Africa’s highest peak.

“I got to the top of Kilimanjaro with a group of people who I went up there with,” said Robson, who captained the red side of Manchester to three FA cups, two premiership titles, and the 1991 European Cup Winners’ Cup. “This lad from Australia, he was Man United-daft and he was asking me for a photo. You don’t expect to find a United fan at the top of Kilimanjaro.

“Everywhere you go in the world, people will recognize you just because of the exposure that Man United have.”

Robson displayed ease and grace interacting with fans and relating stories of his playing years playing as he signed autographs and took photos. The facility of interaction was one borne of a lifetime of dealing with the public in a soccer-crazed world, a fever affecting an ever-growing part of the U.S.

“It’s unbelievable how it’s growing in the U.S. now,” said Robson. “Every time we’ve come to the USA in the last six years you can see the vast growth of our supporters’ clubs all around America. It’s great to see that the fans have so much passion.”

Even McTournaments like the ICC may help Americans become more passionate about soccer. At last year’s match at the University of Michigan between Real Madrid and Man U, 109,318 people observed the spectacle, a record for the sport on U.S. soil. What remains unclear is whether the clubs taking part in the tournament see supporters as a resource of passion or a resource of cash waiting to be tapped.

The corporate atmosphere left its mark on the festivities at Fado. Present were signs and brand representatives from Excelsior emphasizing the sale of a limited edition run of Manchester United-brand wine, available on site for $30 a bottle and bearing the signatures of three of the club’s players.

Absent were the bawdy songs, raucous laughter, and retelling of legendary histories one might expect at a supporters’ gathering. One group of fans occasionally broke into song, but the mood at the event seemed to quickly cause the voices to fade out.

The issue that colored the event at Fado is the same issue taking center stage in the modern age of global soccer: Where do billion-dollar clubs with colossal transfer fees and salaries reconcile with the supposed ideal of universal accessibility for a sport beloved by so many?

After all, sponsorships of a magnitude like the $73.3 million a year that GM pays to have the Chevrolet logo grace the front of United’s jerseys may have a role in bringing the best possible product to the pitch, but they also make the game costlier to see.

Last year, the Guardian reported on the soaring prices of season tickets at Old Trafford. Replica merchandise also is a booming business. Man U’s Nike-manufactured jerseys, which will be replaced by new manufacturer Adidas in August, are selling for $121 on the International Champions Cup’s website.

Yet supporters of Manchester United were thrilled at the club’s presence in Seattle this week. Keith Wales, a Manchester native who used to watch United every week before moving to Los Angeles 30 years ago, always follows the club when they visit.

“It’s great when they come over,” he said. “Even though they’re preseason games, it’s still worth coming to see.”

Wales claimed that his loyalty to the club had made him friends wherever he traveled. He discovered — as Robson did at the summit of Kilimanjaro — that United fans are everywhere. That is where the legend thrives.

The fans in attendance at Fado came from around the globe. Some were Manchester natives, others had grown up watching them in India and Southeast Asia, others are homegrown Seattleites. These fans seemed united by their love of the club’s history and tradition, rather than the availability of a club-approved wine.

Regardless of the increasing prices or corporatizing the game, fans continue to bond with one another through the shared link of supporting the legend. Still, it will take active work to ensure that clubs like Manchester United do not become subservient specters to brands — if they have not already done so.

As the thousands filed out after United’s 1-0 victory Friday night, a few hundred lingered just for the chance to watch midfielder Marouane Fellaini practice finishing crosses into an empty net, cheering with every ball scored.

They stayed for of their love of the game, not the ad boards still flashing with the names of the tournament’s sponsors. For that fleeting moment within the confines of CenturyLink, the club and the sport belonged to them alone.