Thiel: A day at the Sherman softball party

Seahawks cornerback’s third annual charity fundraiser was a fun day at the yard, where Kevin Durant showed no skill at softball and Russell Wilson did, undoubtedly improving his position in contract talks. 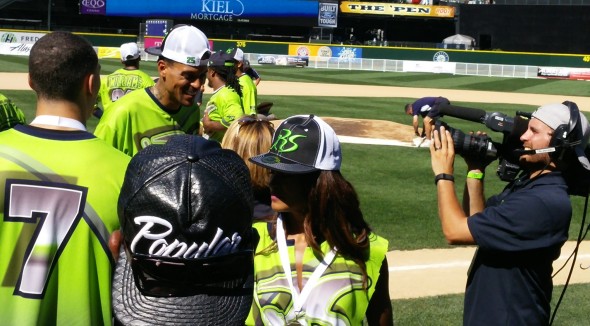 Matt Barnes of the LA Clippers was the MVP, while Zach LaVine (7) drove in the Marshawn Lynch (background) with the winning run. / Art Thiel, Sportspress Northwest

As for Sherman, he was a lot more animated and enthusiastic than when he was last seen publicly: In the audience at the ESPYs awards Wednesday in Los Angeles, staring at Caitlyn Jenner during her speech as if she was a dog reading poetry.

Last year his foundation said it donated $62,500 in $2,500 increments to 25 different nonprofits, as well as hundreds of backpacks and school supplies to middle-school students around the state, including victims of the Carlton Complex fire in eastern Washington.

“Lots of cool guys came here to help my foundation and charity,” Sherman said pre-game. “It’s always an honor to have these guys here; we’re trying to help kids academically and try to give them a chance to succeed later in life.”

One of the coolest guys came the latest — Marshawn Lynch. The Seahawks’ ever-dramatic running back made his only appearance in the bottom of the seventh and final inning as a pinch runner at third base for the Green team.

His single to right produced the walk-off score in a 16-15 win against the stacked Blue team.

“I felt the pressure,” LaVine said, smiling. “Glad I could bring in the hometown hero.”

Matt Barnes of the Los Angeles Clippers, a 6-7 forward and a 12-year NBA vet who’s been around so long he can remember when Seattle had the Sonics, was named game MVP — something Durant can only fantasize about.

As one of the most unusually skilled seven-footers in NBA history, Durant, it turns out, has no eye-hand softball coordination. The former Sonic was helpless at bat and in the field, where he misjudged an easy fly ball as he stood beneath it. Amazing.

The counterpoint, to little surprise, was Russell Wilson, who insists he’s a good baseball player besides his weekend duty as Seahawks QB.

The truth of that is not known, but he can hit a softball, for whatever that’s worth to his negotiation for a contract extension:

But it was the way he won it that intrigued.

Wilson advanced to the second round, and on his last try of the round, sent a line drive down the left field line that fell against the low softball fence at the 300-foot mark.

A yard short of a home run.

Can’t make this stuff up.

But in the third and final round against old teammate Browner, Wilson rallied with a shot that not only made it over the softball fence, it cleared the real baseball wall into Edgar’s Cantina, at least a 340-footer.

For fans who seek omens for the Seahawks 2015 season and its pursuit of The Lost Yard, Wilson offered a sign spooky and eloquent.

Hey, it was better than an oblique tweet from the Bible.