NHL gets bids from Vegas, Quebec, not Tukwila

A developer of an arena proposed for Tukwila, Ray Bartoszek, declined to submit a bid for an NHL expansion franchise, the third of three area parties who said no to a $500 million expansion fee. 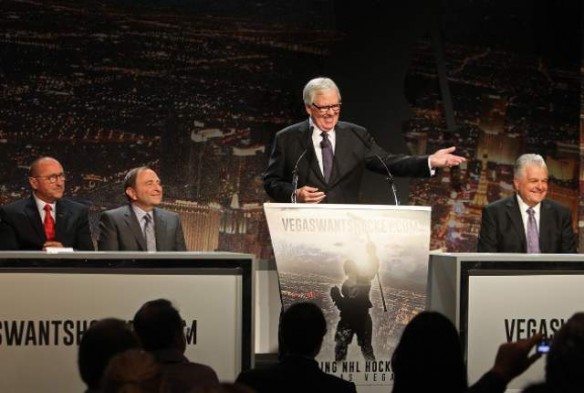 Apparently, Gary Bettman’s league is too sexy for Seattle. Or something.

According to various reports, only Las Vegas and Quebec City submitted bids by the 2 p.m. Monday deadline the NHL set for cities interested in expansion teams by 2017-18 — and both have arenas being built on spec.

Ray Bartoszek, whose plan for a Tukwila arena was anticipated earlier to be the only one from potentially three in the Seattle area to apply, became the third Seattle-area non-player.

According to King County Council member Pete von Reichbauer, who has talked with Bartoszek’s group, the cost was too high.

“It was a realistic response to an unrealistic demand,” he said.

The lack of interest from more cities suggests that Bettman’s belief that an expansion fee of $500 million per team was an over-estimation. But the NHL did get two bids, from cities that took risks in commencing construction before an assurance they would get an anchor pro-sports team. To bid, each was willing to pay a $10 million up-front fee, $2 million of which was non-refundable.

Both markets come with question marks. Las Vegas has never had a major pro sports team to compete against all the other attractions of the Strip. Quebec City, North America’s second-smallest pro sports market, already lost an NHL team when the Nordiques fled French-speaking Canada in 1995 and became the Colorado Avalanche.

Bettman had hoped a flurry of cities would bid to help keep the price high. Then again, the NHL is under no obligation to expand now, and could open the bidding again later.

Here’s how Ken Campbell of The Hockey News put it:

Maybe, just maybe, Gary Bettman is going to have to admit what has become obvious, that he overestimated the value of his product and he’s going to have to bring his price down. Even in the application process, those applying were guaranteed to lose at least $2 million. It turns out that a lot of guys who have a lot of money aren’t in the habit of throwing it down a sinkhole, even when it’s a relative pittance. That’s how most of these guys got rich in the first place.

The NHL made no announcement Monday on the bids, but representatives of ownership groups in Las Vegas and Quebec City confirmed their applications.

We confirm that we submitted our candidacy for the #NHL expansion process in order to bring the #Nordiques back to #Québec City.

But the idea that up to three groups might pursue an arena in the Seattle marketplace died quickly.

Last week, Los Angeles businessman Victor Coleman did not submit a bid to be the NHL owner in Chris Hansen’s Sodo arena project, which can only move ahead when Hansen has a commitment from an NBA team — or an NHL team, if a skeptical City Council agrees to put hockey first. Hansen wants Coleman to partner in the arena construction costs on the terms Hansen agreed to with the city.

Friday, a spokesman for the city of Bellevue confirmed that while discussions have taken place regarding a potential arena on the East Side, no proposal for an arena had been submitted by investors.

The NHL remains eager to be in the Seattle marketplace. Expansion is always the cleanest way. But if in the coming months either of the NHL’s two weakest franchises, the Phoenix Coyotes or the Florida Panthers, suddenly need a new place to play, relocation is possible.

By then, perhaps an arena deal will be green-lighted. And a team can be sold at less than fantasy prices.