Randy Johnson views his 10-year tenure with the Mariners as an “apprenticeship” that prepared him to become a Hall of Famer. He will be inducted in Cooperstown Sunday. 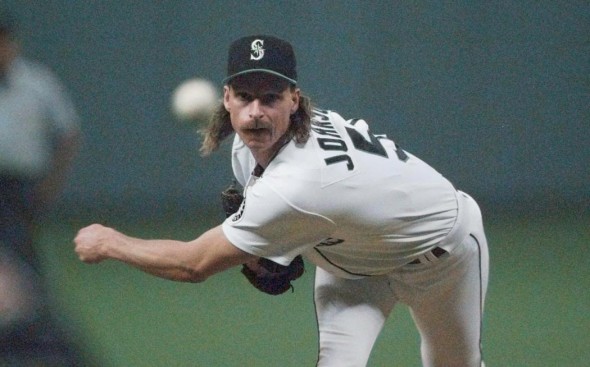 Randy Johnson, a Mariner from 1989-98, will enter the Hall of Fame Sunday. / Mariners

Given a choice, Randy Johnson would represent two franchises Sunday when, accompanied by Pedro Martinez, John Smoltz and Craig Biggio, he enters the Baseball Hall of Fame in Cooperstown, NY. But Johnson had to pick between the Mariners, for whom he won 130 games and a Cy Young between 1989-98, and the Arizona Diamondbacks, for whom he won a World Series (2001) and four consecutive Cy Youngs (1999-02).

“My time in Seattle was wonderful,” Johnson said in his final interview before induction ceremonies. “Obviously it was the beginning of my career and I like to think that the 10 years I spent in Seattle was really my apprenticeship on understanding how to pitch. Seattle was where I evolved into the pitcher I was going to become.

“If I could wear two emblems, I would obviously wear Seattle and Arizona. But I feel I need to represent one of these teams. In Seattle, I won a Cy Young and grew up learning how to play, with Ken Griffey Jr., Jay Buhner, Edgar Martinez, Omar Vizquel and many others, including Dan Wilson. But I got to a whole other level (to the Mariners’ eternal chagrin) after I left Seattle, and that was in Arizona. That’s why I’m representing the Diamondbacks, for no other reason than my body of work there.”

Johnson’s “body of work” is so staggering that only two other pitchers — Tom Seaver (98.84) and Nolan Ryan (98.79) — earned election to the Hall of Fame with a higher percentage of the vote than Johnson’s 97.30. Cy Young himself received only 76.1 percent.

Johnson won 303 games over 22 major league seasons. He led his league in strikeouts eight times and in earned run average and winning percentage four times each. His career mark of 10.6 strikeouts per nine is the best in history, and his total of 4,875 ranks second to Ryan. The Big Unit also threw a perfect game (2004) and a no-hitter (1990).

While all that’s awesome, it’s also pretty dry. We prefer this Johnson definer: Twenty-nine major leaguers have recorded 3,000-plus hits. Johnson faced 13. He held the baker’s dozen, among the greatest hitters in history, to a combined .158 batting average.

Keep in mind that Johnson accomplished this during the steroids era, when baseballs routinely flew out of parks. That was also an era in which many hitter-friendly parks were constructed and QuesTec, the digital supervisor of umpires introduced in 2000, dramatically shrank the strike zone.

“So now you had a strike zone that got much smaller and you had smaller ballparks. And I think that, plus the steroids, was conducive for offense and not so much for pitchers,” Johnson said. “So for a pitcher to be successful, it was really an uphill battle. The game was really more about offense.”

“Baseball is a game of ups and downs,” Johnson said. “I had plenty of both. I pitched in the majors for 22 years, and over that time some guys are just going to have some success against you.”

But not the guys you’d expect. While Johnson had his way with the 3,000-hit club, he couldn’t get Bob Melvin out. Manager of the Mariners in 2003-04, Melvin played 10 seasons with Detroit, San Francisco, Baltimore, Kansas City, Boston, New York Yankees and Chicago White Sox. A catcher, Melvin retired after 1994 with a career .233 average – obviously not Johnny Bench, but Hank Aaron compared to Mike Zunino.

Melvin went 14-for-31 (.462) against the Big Unit, same as Pujols. Among players with at least 15 at-bats against Johnson, only Mariners TV analyst Mike Blowers hit better against him than Melvin.

During Johnson’s years with the Mariners, he had to overcome two other obstacles, the bandbox Kingdome and his own relief staff.

“Toward the end of my time in Seattle, I was really coming into my own as a successful pitcher,” Johnson said. “Then when I went to Houston (deadline trade July 31, 1998), I had the two best months of my career and also the best closer in the game at that time, Billy Wagner. I never had two other months like that even in Arizona.

“I pitched in 11 games and went 10-1. By that time, I was able to harness my fastball and I had an understanding of what it took to pitch at this level.”

Of all the wonderfully absurd statistics posted by Johnson, this is one that really illustrates his dominance: Most games with 10 or more strikeouts and no walks.

Felix Hernandez has logged 10 such games in 10-plus seasons, Johan Santana had nine, Nolan Ryan eight, Sandy Koufax seven and, going back a century, Walter Johnson four. The Big Unit posted 36, including five with 15 K’s and no walks. Most times 10-plus strikeouts, no walks:

“One of the big keys for me was understanding how hard I needed to work in the weight room to maintain my ability to go out there and throw the amount of pitches that I was throwing, and then be able to do it five days later,” Johnson continued.

“Now, after 26 years in professional baseball (which included four back surgeries, three knee surgeries and a torn rotator cuff), I’m told that I get 10 or 11 minutes in my speech to wrap it up. I think I’ll be more nervous than in any game I ever pitched, but extremely excited, humbled and proud.”