After three years learning from one of the Pacific Northwest’s preeminent voices in sportswriting, reporter Adam Lewis is moving to seattlepi.com to lead the website’s Seattle Mariners coverage. 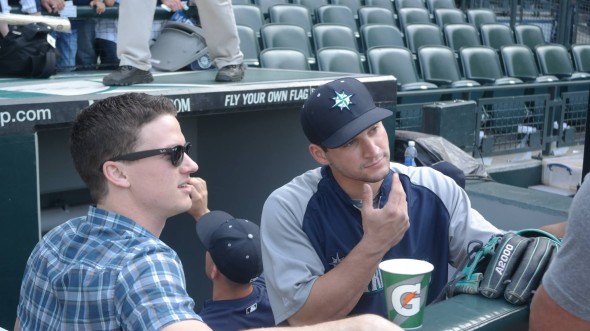 I wrote my first story for Sportspress Northwest more than three years ago on the sort of day veteran sportswriters bemoan — when a late lead change demands a quick re-write.

The Seattle Storm’s season opener against the Los Angeles Sparks drew a crowd of about 10,000 into KeyArena’s lower bowl to see all-everything point guard Sue Bird help the Storm build a 21-point, second-half lead with a mix of mid-range jumpers and drives through the lane.

Even for a college junior with minimal experience covering basketball, this game story seemed easy.

For three quarters, Bird was stellar and so was the Storm. A raucous gathering reinforced Seattle’s reputation as a basketball-starved city.

Then the Storm was outscored 30-10 in the fourth quarter.

The 72-66 loss was a prelude to a mediocre season, an early sign that without injured center Lauren Jackson, the Storm had little chance of winning a third WNBA championship.

At the time, I had no idea. I was in panic mode. The late lead change wrecked my game story, which I “finished” by the end of the third quarter before scrambling to do a re-write.

My gamer was so mangled it should have been sent to Harborview Hospital.

Instead, it went to Art Thiel.

To my credit, I had only a few things wrong — forgot the final score in my lede, botched the number of turnovers and misspelled two names (I’m looking at you, Shekinna Stricklen and Kristi Toliver).

My sportswriting career could have ended right there. I shudder at the thought of Thiel reading such drivel while wondering how much Busch Light I consumed at Washington State University.

“You’ll do better next time,” Thiel wrote in an email. “This is why journalism has editors and internships.”

The subsequent 38 months — interrupted by a seven-month stint with MLB.com — wasn’t so much an internship as it was a graduate level course in sportswriting taught by a hulking man with a pantheon of knowledge about this business, and the business of writing.

Remember that popular professor from college? The one everyone liked, swore occasionally and kept lectures fresh with smart, funny insight? That’s Thiel. Only he’s cooler.

I always expected him to bust out a corn cob pipe and load a hunk of shredded tobacco while explaining how to come up with the perfect metaphor. The man is a throwback with a deep respect for the English language, capable of twisting a phrase like the late columnist Jim Murray of the LA Times.

Thiel turned me from amateur to pro. Or at least something resembling one.

Two weeks ago, I accepted a job at seattlepi.com to head their Seattle Mariners coverage and serve as backup Seahawks reporter.

The decision was difficult, but after three years of freelancing for various websites and working for Sportspress Northwest, I was ready for a new challenge and a full-time job.

I love baseball. Always have. I grew up doing Dave Niehaus impersonations at the dinner table before launching a mediocre high school career as a third baseman and pitcher.

Well-versed in the teachings of legendary coach Bobo Brayton, I dreamed of walking on at WSU and working my way to a starting role. Around my freshman year of college, I approached then-pitching coach Gregg Swenson about the possibility of earning a roster spot. Looking back, I’m surprised he didn’t burst into laughter. Instead, he asked if I had any interest in being a bullpen catcher.

I knew my playing career was finished. But I never fell out of love with baseball. So the chance to get paid to write about an MLB team is simply too good to pass up.

My first day with seattlepi.com is Monday, so this is goodbye for now. Thanks to every reader, commenter and to Thiel, Steve Rudman, and operations manager Tim Garrison for taking a chance on me three years ago, and sticking with me as I grew up.

It made all the difference.