Beset by physical problems over the past two-plus seasons, Franklin Gutierrez delivered a walk-off home run Sunday that provided joy in an otherwise bleak season. 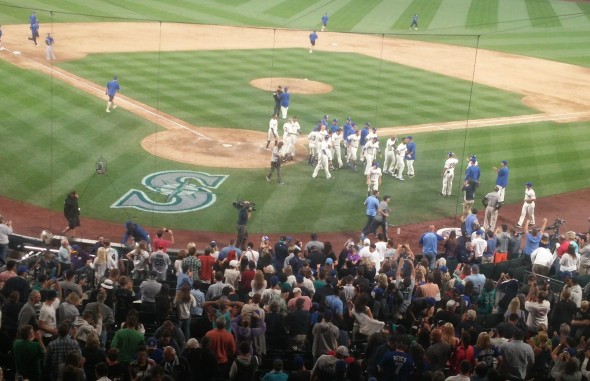 The party was on at home plate after Franklin Gutierrez hit the game-winning homer Sunday, although the standard pounding was s little light. / Art Thiel, Sportspress Northwest

We pause in a dour, disquieting Mariners season to celebrate something splendid — Franklin Gutierrez, baseball hero.

His 10th-inning, walk-off homer against Toronto Sunday produced what amounts to, in a 46-53 season, a big win (box score), as well as a 2-1 series victory. The high-leverage drama also provided a crisp slap upside the heads of Blue Jays fans who came down from Baja America to outnumber the United Staters in a crowd of 35,519 at Safeco Field.

Not only that, the homer followed a pinch-hit grand slam Tuesday by Gutierrez that rescued an 11-9 triumph in Detroit.

These gratifications climaxed a professional comeback by Gutierrez that produces a little moisture in the corners of the eyes of his teammates, whose same eyes in spring training presumed they were seeing a specter when he hobbled in after two years in baseball purgatory.

Cue up, “Ghost Riders in the Sky.”

The forces that brought back Gutierrez from career death are so little understood that when he crossed the plate into a giddy crowd of celebrants, an alert was shouted:

“Somebody was saying, ‘Don’t hurt him! Don’t hurt him!'” said Gutierrez, whose grin over the humor at his expense symbolized something as rewarding as the homer — he was a normal guy again. Gone were his days as an object of pity, back is his role as major league contributor.

“I think he’s everybody’s favorite player in the clubhouse,” said Brad Miller, who is just old enough to remember when Gutierrez, 32, was briefly among the best centerfielders in the game, before a series of injuries, ailments and accidents rendered his career virtually inert. “He’s so under control, so strong — the ultimate professional. Pretty sweet.”

Since his call-up from a successful half-season in Tacoma, he’s 12 for 45 (.267), with three homers and two doubles and has played a respectable left field despite a loss of speed.

But no one is suggesting he is a full-timer yet. The Mariners’ plan is to platoon and pinch-hit him because they think his body is not ready for the rigors of every-day work. It is, however, tempting.

“He’s been plying extremely well — it’s kinda hard keeping him out of the lineup,” said manager Lloyd McClendon. “It’s been a tough road. The biggest challenge for us is to manage his playing time.”

But any playing time at all exceeded what Gutierrez imagined for himself in February.

“When I came to spring training I wasn’t expecting anything,” he said. “I wasn’t sure at all. I just wanted to know if I was able to play again. I knew I was feeling better and better.

“And here we are again, doing the job.”

Heartwarming as is Gutierrez’s saga, he would not have had the stage had not starter Taijuan Walker recovered from a three-run second inning to get through six innings, helping a bullpen McClendon termed pre-game “a mess.”

Nor would things have worked out had not the Mariners pulled off in the fourth inning a triple play of a kind not seen in the majors since 1955. The Blue Jays had Kevin Pillar on first and Ezequiel Carrera on third with no outs when the bewilderment began.

Walker induced Ryan Goins into grounding to first right at Trumbo, who stepped on the bag for the first out, then fired to Miller covering second to get Pillar. Carrera was trying to sneak away from third, but Miller saw that and ran slowly and directly at him, skipping the chance to tag Pillar and creating a rundown.

Carrera broke for the plate, but Zunino took Miller’s throw and chased Carrera back to third, where Carrera found Pillar, who had kept running. By rule, the base belonged to Carrera, meaning Pillar was out. Zunino tagged both runners, then in the confusion, Carrera came off the bag awkwardly and fell, Zunino applying the tag. Out No. 3.

The slow-developing awkwardness was so unusual that Miller admitted he hadn’t realized it was a triple play — 11th in club history — until he checked a text message in the clubhouse after the game.

As for McClendon, “I thought it was great. Right on for me. I followed the ball pretty good.”

The other remarkable aspect of the game was a 3-for-4 day for C Mike Zunino, who would have gone 4-for-4 with a homer if not for a leaping, over-the-wall catch in left by Carrera in the sixth inning. Zunino is on a six-game hitting streak in which he is 9 for 20.

It’s unlikely that cynically hard-core Mariners fans are going to change minds about the fate of this season. But for a day, the feeling could not have been much better.

The win was the Mariners’ first in the rubber match of a series in eight tries dating to April 19  . . . Toronto’s ace starter Mark Buerhle saw his club-record streak snapped of nine consecutive starts allowing two earned runs or less with 6+ . . . The Mariners had five hits in the third inning, tying a single-inning high this season for the fifth time . . . According to the SABR Triple Play database of more than 700 triple plays, Sunday’s was the first featuring a 3-6-2-2 since Aug. 3, 1955 (Baltimore vs. Kansas City). It was the third triple play in MLB this season.