Felix Hernandez holds tough Blue Jays lineup to one earned run, and Mark Trumbo comes through with a homer as Mariners dare to win two in a row. 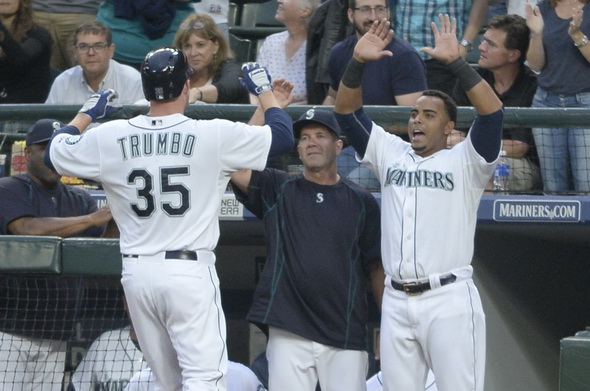 America’s Team – well, as long as the Blue Jays are in town – came out Friday night and did something the Mariners had not been able to do all month. That is, Seattle beat Toronto 5-2 to finally win consecutive games in July (box score). An announced crowd of 43,328 featured many decked out in north-of-the-border blue.

DH Mark Trumbo kick-started the offense with a two-run homer in the fourth. That gave the Mariners their first lead, at 2-1, and wound up with all the runs in the fourth and fifth.

Felix Hernandez wasn’t necessarily at his best, but he was more than good enough on a night when the Mariners gave him an early lead. Hernandez allowed only one earned run, on a Jose Bautista solo homer in the sixth. His worst throw of the night came in the first when he tried to throw out a runner at first and floated one into right field – setting up an unearned run. Closer Carson Smith continues to shine, with a 1-2-3 ninth that went by faster than one could say, “Fernando Who?”

The decision to flip Nelson Cruz and Robinson Cano in the batting order has continued to pay dividends. Cano was in the cleanup spot for the fifth game in a row, and he continues to tear it up. His two-run triple in the fifth helped blow open the game, while Cruz reached base on each of his first four plate appearances. Trumbo’s homer got things going, then the Seattle bats came alive to out-hit one of the best offenses in the American League.

“We’re a better club from an offensive standpoint than you saw in the first half. That’s starting to come to fruition. They’re starting to swing the way they’re capable of swinging.” – manager Lloyd McClendon

The win wasn’t without its head-scratching gaffes. The Blue Jays scored their first run when Seattle 1B Logan Morrison casually jogged toward the bag for an unassisted putout without realizing that baserunner Jose Reyes had broken from third for home. Three innings later, having put runners on second and third with no outs, the Mariners came up empty when SS Brad Miller was thrown out by the catcher as Miller dawdled off the bag . . . Bautista hit his 224th career homer and moved into sole possession of second place on Toronto’s career home-run list, passing Vernon Wells while trailing only Carlos Delgado’s total of 336 . . . The last time Seattle won back-to-back games was on June 30-July 1, when the Mariners swept a two-game series in San Diego.

LHP J.A. Happ (4-5, 4.12 ERA) will get a chance to face his former team when the Mariners host Toronto Saturday night. Happ spent the past three seasons with the Blue Jays before Seattle dealt Team Canada star and oft-injured OF Michael Saunders for him over the off-season. It’s anyone’s guess who might start for the Blue Jays, as RHP Drew Hutchinson (9-2, 5.19 ERA) has been scratched two days in a row due to the flu but would probably get the nod if healthy. If Hutchinson is still ailing, look for Toronto to make a roster move to promote a fill-in starter.