For the third time in as many matches, the Seattle Sounders conceded a goal in the final 10 minutes to lose 1-0, this time on the road to the Montreal Impact. Laurent Ciman was the home-team hero, heading in the … 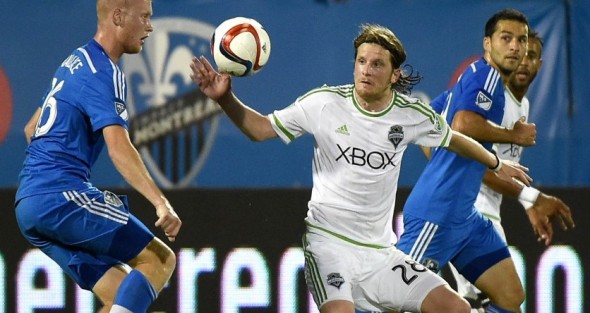 Erik Friberg appears to have his hands full Saturday in Montreal against the Impact. / SoundersFC.com

For the third time in as many matches, the Seattle Sounders conceded a goal in the final 10 minutes to lose 1-0, this time on the road to the Montreal Impact. Laurent Ciman was the home-team hero, heading in the game-winner in the 88th minute.

Seattle (10-10-2) is in a free fall in both in the Western Conference standings and MLS power rankings with six losses in seven contests. Montreal (7-3-8) had lost two matches at home all season, despite languishing in the bottom half of the Eastern Conference table.

Sounders head coach Sigi Schmid continued using the 4-3-3 formation he deployed in a loss to Colorado July 18, with the lone change being a rearrangement of the attacking three. Lamar Neagle was pushed onto the wing to make room in the middle for Chad Barrett, who did not start against Colorado.

Unlike the Colorado match, where the more aggressive lineup forced the Rapids onto their heels for most of the match, Montreal dominated the Sounders in the midfield, and they looked sluggish with the ball at their feet.

Schmid was critical of his team’s offensive production.

“That’s just really frustrating. You can’t go 270 minutes without scoring a goal,” said Schmid, who pointed out that his team, which tallied three shots against Montreal’s 14, had not forced a save from Montreal keeper Evan Bush.

Seattle had difficulty getting touches. The Impact controlled the ball for 61 percent of the match. The Sounders nearly converted a dangerous chance in the sixth minute, as a cross to Barrett was headed just wide of the net.

Ciman took away the Sounders’ other promising opportunity. A 66th-minute long ball found the feet of Neagle inside the penalty area, but Ciman was able to sprint back and win the ball from the Sounders’ forward.

The final blow came as a result of a late free kick. Osvaldo Alonso tackled the ball away from Ciman, appearing to take it cleanly, but the referee signaled for a foul. Montreal’s Marco Donadel swung the ball towards the net from long range and Ciman got on the end of it, heading the ball into the net past Sounders keeper Troy Perkins.

Perkins, who faced 14 shots and made five saves, did not fault the referee for awarding the free kick.

“We didn’t deal with (the free kick),” said Perkins. “We know that Ciman was a threat on every set piece, we didn’t defend it very well.”

Schmid was straightforward in his assessment of the team’s requirements for better results.

“The players have to play better,” said Schmid. “At the end of the day we can try all the formations that we want, but when you face people up you’ve got to make plays.”

Schmid also voiced concerns that he was low on options for further adjustments:

“Guys right now just don’t have confidence and they’re not very decisive, so that’s on me as the coach. I’ve got to figure out a way to do it. Some guys probably need to go to the bench, but we don’t have any alternatives right now so there’s not much that we can do.”

Schmid denied that the MLS All-Star game Wednesday, where Clint Dempsey and Chad Marshall will represent the Sounders (along with Obafemi Martins, who will not play due to injury), offered a reprieve for his beleaguered side.

“What break? The All-Star game takes place on Wednesday, and you play the following Saturday and people call it a break. It’s no break, so we just keep going. We’ve got a game next week, and hopefully we get a couple players back.”

Those players may well include Dempsey and Brad Evans, who have been absent on international duty in the CONCACAF Gold Cup. Also returning may be starting keeper Stefan Frei, who has not played in three matches while recovering from a sprained shoulder. Unlikely to return next weekend are Martins, who has not played since mid-June due to a groin injury, and Marco Pappa, who was arrested last Sunday for driving under the influence and speeding following the Sounders’ loss to Colorado.

Seattle will host the Vancouver Whitecaps, a team that sits two points back from first place in the Western Conference, Aug. 1.