The Mariners overcame a 3-0 hole to tie in the ninth, but another fail by a worn-out bullpen in the 10th gave Arizona a 4-3 triumph Monday night in game 100. 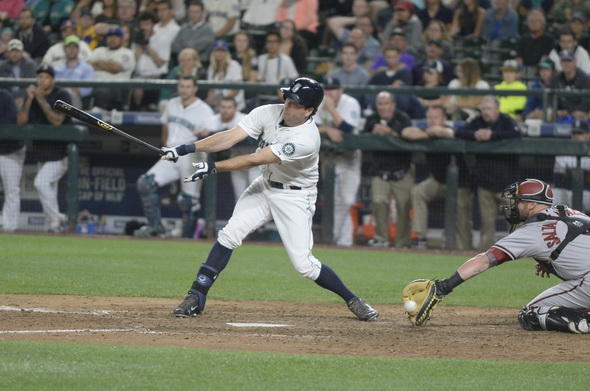 Seth Smith strikes out in the 10th inning to end a 4-3 loss to Arizona Monday night. / Alan Chitlik, Sportspress Northwest

The Mariners worked overtime again Monday night, their second consecutive extra-inning game and third in five nights. But this time they had to watch helplessly the celebration in  Safeco Field’s visitors dugout. Seth Smith’s strikeout with runners on first and second base in the bottom of the 10th inning finished off a 4-3 loss (box score) to the Arizona Diamondbacks.

Bishop Blanchet High School product Jake Lamb returned to his hometown and delivered the fatal blow with a bases-loaded sacrifice fly in the top of the 10th inning. After Vidal Nuno came on to replace struggling closer Carson Smith, Lamb lined a fly ball into shallow center – CF Austin Jackson couldn’t get the ball out of his glove cleanly, allowing the go-ahead run to score.

Manager Lloyd McClendon had to get creative with his paper-thin bullpen, turning to struggling veteran Fernando Rodney and starter J.A. Happ – two days after his last start – in the ninth. Those turned out to be pretty good moves, as the pair retired all six batters they combined to face to keep the game close.

Without other options, McClendon tried closer Carson Smith in the 10th. The overworked youngster had another rough outing. LHP Mike Montgomery got ex-Marinered by a guy who spent just 15 days in Seattle – Arizona C Welington Castillo, who homered in the second inning. Montgomery didn’t get a lot of help from the infield, which botched two easy plays in the first four innings, but he eventually got on track and made it through 6.2 innings.

C Mike Zunino got the big hit with a two-out, two-strike RBI single in the ninth to tie at 3. 2B Robinson Cano made up for his sloppy glove work with a pair of hits, including a sixth-inning solo homer. Cano, batting .406 during his eight-game stretch as cleanup hitter, has 11 home runs – three shy of his 2014 total. Former Diamondback Mark Trumbo (3 for 4 with two doubles and an RBI) did some damage against his former team. The goat had to be Seth Smith, who grounded into a double play in the ninth and struck out to end the game.

“I think they’d still like me if I didn’t get the (sacrifice fly). I’d like to think so anyway. But it was nice to get the RBI.” –Diamondbacks 3B Jake Lamb, a graduate of the University of Washington, on getting the game-winning RBI in front of more than 50 friends and family members

Former Mariner Dominic Leone didn’t stick around long enough to make it to the reunion. The Diamondbacks reliever, sent to Arizona in the traded that brought Trumbo and Nuno, was optioned to Double-A Mobile Sunday. The Diamondbacks activated C Jarrod Saltalamacchia from the 15-day disabled list before Monday’s game . . . Castillo, who was also involved in that trade, played six games with the Mariners, having been acquired from the Cubs May 19 before getting shipped to Arizona 15 days later . . . Before Monday’s game, the Mariners and Diamondbacks engaged in another trade, albeit a minor one. Arizona sent RHP J.C. Ramirez, a minor-league reliever, to Seattle for cash. Ramirez is expected to be assigned to Tacoma.

Could this be the final start for RHP Hisashi Iwakuma in a Seattle uniform? It’s possible, as the veteran and pending free agent has been rumored as trade bait and could be dealt before Friday’s deadline. Iwakuma (2-1, 4.50 ERA) is scheduled to start Tuesday. Rookie RHP Zack Godley (1-0, 0.00 ERA) is slated to make his second career start for the Diamondbacks.