Mariners give up on Ackley, send him to Yankees

The Mariners waited on Dustin Ackley for five years, but the former No. 1 pick never panned out, leading to his trade to the New York Yankees Thursday. 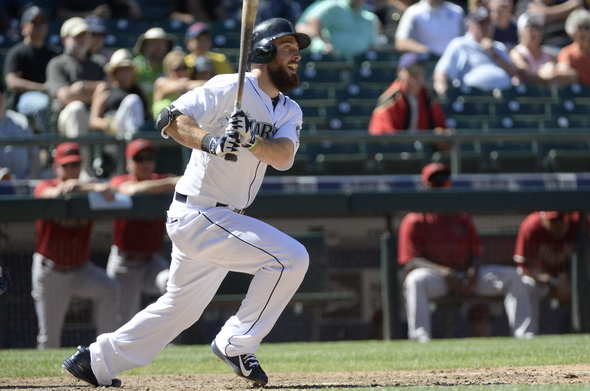 The Mariners Thursday finally gave up on unproductive veteran Dustin Ackley, trading the former first-round draft choice (No. 2 overall in 2009) to the New York Yankees for a pair of  minor leaguers, OF Ramon Flores and RHP Jose Ramirez. Seattle has not yet made a corresponding move to fill Ackley’s spot on the 25-man roster, but is expected to replace him by Friday with 1B/DH Jesus Montero.

The 27-year-old Ackley, whom the Mariners thought would develop into an outstanding contact hitter based on his play at the University of North Carolina, never panned out. In five seasons, he batted .243 and leaves Seattle with a .215 average this season (eight doubles, one triple, six home runs and 19 RBIs in 85 games). Ackley hasn’t had an OPS above .700 since 2011, and manager Lloyd McClendon frequently removed Ackley for pinch hitters in late-game pressure situations.

“This is crazy,” Ackley told mlb.com after the swap. “But I’m excited for what the future has to bring.”

Flores and Ramirez, who were on the AAA Scranton/Wilkes-Barre roster, are scheduled to report to the Rainiers. Based on his recent hot hitting, Montero is a likely candidate to join the Mariners in Minnesota, where they begin a three-game series Thursday night. The Rainiers were in El Paso and couldn’t get travel arranged fast enough.

Flores, 23, has spent most of the year with Scranton of the International League. He is batting .286 with 43 runs scored, 11 doubles, two triples, seven home runs and 34 RBIs in 73 games. The left-handed hitter is also batting .333 with runners in scoring position and currently ranks fifth in the IL with a .377 on-base percentage. He made his MLB debut May 30 vs. the Athletics, and appeared in 12 games with the Yankees, batting .219.

The Venezuelan native hit .272 in seven minor league seasons. Primarily a left fielder, Flores was listed as the Yankees No. 27 prospect by Baseball America heading into the season.

In eight minor league seasons, the Dominican Republic native has a 32-32 record with 12 saves and a 3.60 ERA in 146 appearances (96 starts). A starter most of his professional career, Ramirez made the move to the bullpen in 2014. He is listed by Baseball America as the Yankees No. 26 prospect.

In nine games since returning to the Rainiers July 21, Montero is 18-for-36 (.500) with five doubles, one triple, one home run and eight RBIs (1.349 OPS). He was selected to play in the midseason AAA All-Star Game.