With only hours to go before training camp, the Seahawks and QB Russell Wilson have agreed on a four-year, $87.6 million contract. 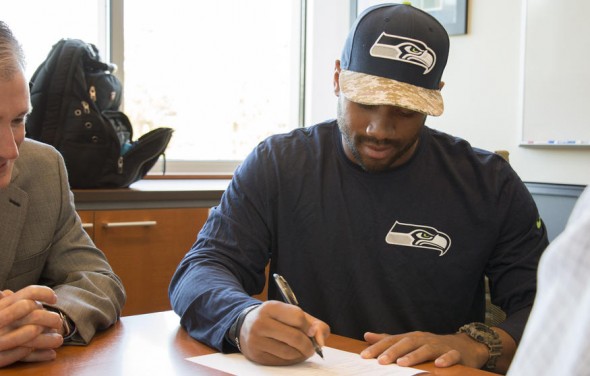 After months of negotiations and with a self-imposed deadline imminent, the Seahawks and quarterback Russell Wilson agreed Friday morning on a four-year extension worth $87.6 million. Wilson’s new deal includes a $31 million signing bonus and $60 million in guaranteed money.Those figures are supplied by spotrac.com, which curates all NFL contracts.

The agreement, first reported via Twitter by Peter King of SI.com, was confirmed by Wilson, who tweeted, “Blessed to be w/this organization for four more years! Can’t wait to get on the field w/the fellas.”

Wilson and the Seahawks wanted a deal done before training camp began Friday. Wilson stated that if the sides could not agree before then, he would play the 2015 season under the terms of the fourth year of his rookie contract, $1.542 million.

Wilson’s annual average salary of $21.9 million places him slightly below Green Bay’s Aaron Rogers, the highest-paid quarterback in the NFL at $22 million, and just ahead of Pittsburgh’s Ben Roethlisberger at $21.85 million.

Wilson’s $60 million in guaranteed money is equal to what Carolina’s Cam Newton agreed to in a five-year deal with the Panthers signed earlier this year.

By signing a four-year extension, as opposed to a five-year extension as Newton did, Wilson will enter the final year of his new contract at 30, giving him an opportunity for another big payday. The shorter deal was a concession made by the Seahawks.

Wilson, scheduled to become a free agent in 2020, is entering his fourth year with the Seahawks. He has led the club to consecutive Super Bowl appearances, only the fourth quarterback to do so since 1994, when current free agency rules were put into place.

A third-round pick (75th overall) in 2012, Wilson has had one of the most impressive starts to a career by any quarterback. Through three seasons he ranks first in total wins (42), playoff wins (6) and Super Bowl starts (2). He’s also second in passer rating (98.5) and fourth in touchdown passes (84). Wilson has also conducted the most game-winning drives by a quarterback since entering the league in (15).