With its hard salary cap, the NFL is set up to make the strong fall. Now that they will pay one player $87.6M, Seahawks have their biggest challenge yet to sustaining excellence. 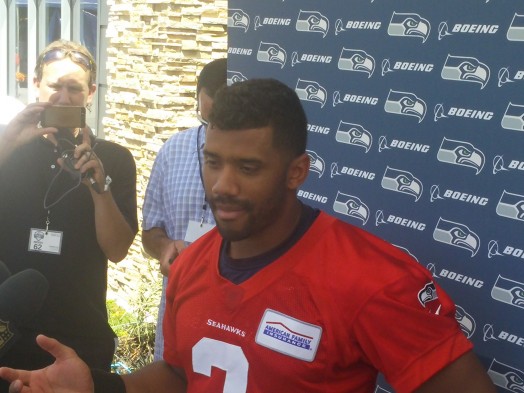 Russell Wilson’s compensation puts him with the QB elites in the NFL. / Art Thiel, Sportspress Northwest

RENTON — Since Paul Allen is the richest owner in the NFL by a magnitude of four, the casual football fan may be puzzled as to why the billionaire Seahawks owner can’t pay his star QB as he pleases. Allen can’t because there is a cruel irony baked into the game’s rules: All the ruthless capitalists who own the game have agreed to play football as socialists.

By sharing revenues and capping expenses, the NFL has created a Marxian utopia where the least shall be strong and the strong shall be least. For a fan in most markets, this is a fine thing, because nearly every franchise can offer the belief that this year or next year or maybe two years out, their team, unlike the Mariners, can be great.

But for fans of the teams on top, it’s hell. Good players leave for better offers from other teams, and those that do stay want to be heavily rewarded. In Seattle, that means that fans spent the entire off-season grinding molars over the varying attempts at cash grabs by Marshawn Lynch, Michael Bennett, Kam Chancellor, Bobby Wagner and particularly Russell Wilson.

For the other team in the past Super Bowl, it means having your quarterback suspended for four games and planning to sue in federal court.

Life at the top of the NFL. No room for puppies, candy and flowers.

At least in Seattle, there will be no injunctions. Lynch got his early in the off-season, Bennett showed up to camp empty-handed with no apparent pout, Wagner is likely to get his deal done shortly. Chancellor is still pouting, but will likely show up empty-handed too.

The big deal was, of course, Wilson. Late Thursday night, after the team’s 10:30 p.m. curfew, Wilson said he was in bed at the team hotel and on the phone chatting with girlfriend Ciara when agent Mark Rodgers interrupted with a call: The deal was done.

“It was one of the coolest days of my life,” Wilson said of the moment. “Being able to call my mom — even though she was on the East Coast she answered the phone. She was knocked-out asleep but she answered. That was pretty cool.”

How cool was her son’s story? A four-year extension through the 2019 season for $87.6 million that includes a $31 million signing bonus and $61.3 million guaranteed. Wilson gets $20 million within 10 days, and the rest April 1.

The dealmaker was the Seahawks’ willingness to reduce the length of the proposal from five years to four, meaning that Wilson will be eligible, health permitting, for his next contract at 30, still well in the prime years for an NFL QB.

“It puts him in a situation where he’s still a young man,” said Rodgers, who joined his client at the club’s headquarters. “He gets an opportunity maybe to talk about another contract down the road. You don’t do a contract necessarily thinking about the next contract.

“But I think that’s the big difference between a four-year extension and a five-year extension. That’s a long year.That was a bit of a goal and I think we got there and he was pleased with it.”

Rodgers denied reports that he insisted on making Wilson the highest-paid player, or with the most guaranteed money. But Wilson’s deal is right there with Green Bay’s Aaron Rodgers and Carolina’s Cam Newton at the top of the market.

So Wilson basically received what he sought. The big question: Can the Seahawks live with it?

In so many cases, paying one player so much of the space under the salary cap handicaps  the franchise. It is the socialist prime directive kicking in. That’s a big reason why no team since the 1993 Buffalo Bills has made it to three consecutive Super Bowls — and that was before the 1994 advent of a collective bargaining agreement that included the salary cap.

Hard as it was for the Seahawks to make it to a second Super Bowl, a third consecutive appearance fights against the league mission to undercut the strong. Naturally, coach Pete Carroll has a plan and a purpose.

“We’re watching just what we’re going through right now — the growing pains of last year and this year,” he said after the team’s first practice. “There’s always this painful kind of thing that you work with. This is part of this ascent. Are we able to handle it? Can we keep our focus and practice like we did today, day after day after day, and keep our level of play?

Resolving Wilson’s deal was a large step in that direction. The cap hit for this season is about $7 million, which isn’t huge but eats up most of the $9.5 million cap space the Seahawks had. That could mean some veteran players will be cut or have contracts restructured to make room for Wagner’s deal, the last big one remaining.

For now, the biggest off-season wrinkle has smoothed out. Wilson, who heard from nearly everyone he encountered about the state of negotiations, was asked who was most prominent among his “counselors.”

“I think President Obama mentioned it,” he said. “It was one of those things like, ‘Hey, they’ve gotta sign you.’ Just joking around. I think he was joking, I don’t know. I took it serious. I think he mentioned something.”

We as a nation can breathe easier knowing that the President can return his concentration to lesser tasks, even if his nation’s premier sports league’s socialist foundation is threatened by outliers in Seattle.

This one is for you dad! https://t.co/Fok7VosSkR