Almost never do the Seahawks throw multiple draft choices to get a player, then name him a starter from Day One. They did with returner/receiver Tyler Loclkett. Pay close attention to this guy. 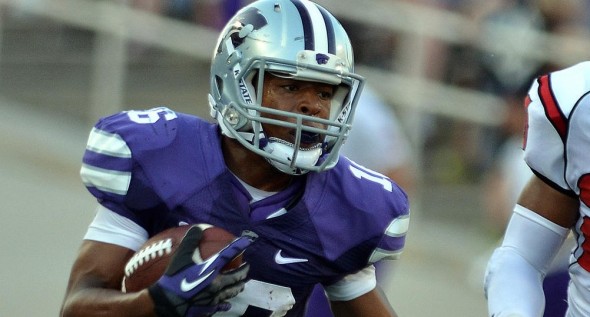 RENTON — Pro football training camps are rich with longshots, misfits, second-chancers and mutts. The Seahawks more than most. The VMAC facility is world headquarters for UDFAs, the undrafted free agents who report directly to the UDFA king, Doug Baldwin, and his prince, Jermaine Kearse.

Good as those stories are, I’m intrigued this camp with someone with a little pedigree, a guy the Seahawks wanted so bad they traded four of their precious draft choices to get — for special teams. In the third round — confounding again the draftniks and pundits who profess to know every draftable player down to his colonoscopy, and every team’s preferences down to the coaches’ double-tall, half-caff, sugar-free, no-foam lattes.

No one saw Tyler Lockett coming to Seattle. Opponents will see him going.

Lockett is so quick and so fast he might be Percy Harvin without the detonator personality. Give him the ball as a receiver, and he might be his hero, Pittsburgh’s Antonio Brown, who led the NFL last season in yards (1,698) and receptions (129). At 5-foot-10 and 186 pounds.

“I always thought Antonio was similar to me,” he said Saturday, when asked to offer a comparison.  “This year, I want to elevate my game to . . . me being me. I want to put things in my repertoire that will make me better.”

Hey, he had me at “repertoire.”

For those unfamiliar with the scorch marks he left in the Big 12 Conference, he was the second-team AP All-America all-purpose player. You may have heard of the player picked for the first team — Washington’s Shaq Thompson. Lockett led the nation in punt-return average and was ninth in kickoff-return average. He set K-State career marks for receptions, receiving yards and receiving touchdowns. All set by his father, Kevin.

Lockett clearly had Pete Carroll at draft day, when the little guy, whose dad played in the NFL, became the 69th pick after the Seahawks off-loaded four draft choices to the Washington Redskins (including the pick they received for Harvin from the New Jets).

”He’s got the knack — he’s got the big play nature to him,” Carroll said then. “His attitude is perfect for wanting to jump in there. I would imagine he catches the first kickoff of the season. He will compete to prove that, but it is hard to imagine anyone can out-do him back there.”

Lockett made the Seahawks bosses do two things they never do — throw draft picks around like nickels, and ordain a starter before the player has pulled on a jersey. He also made Carroll do something he rarely does with rookies early on in camp.

“I talked to him yesterday in my office,” Carroll said Sunday, telling him, “‘just go for it, see how far you can take it.’ (He’s) in the competition for the returns, of course. But he’s fighting for play time as receiver as well.

“We’re not going to restrict him in any way at this point.”

That sounds about like what Carroll told the third-round draft choice in the 2012 camp — Russell Wilson.

“I can’t wait to get upstairs (to watch film) for our first one-on-ones,” Carroll said of the first partial-pads practice when contact was allowed. “This is our first chance to see him in one-on-ones. He’s really quick. His suddenness in and out of breaks is like Doug (Baldwin). That means that we’ve got another guy that can get away from people. Terrifically strong hands, he’s very confident, he’s solid as a football player, good all-around ball player . . . tough guy too.”

His father was a four-year star wide receiver for Kansas State from 1993-96 who played eight NFL seasons for four teams starting with Kansas City, which drafted him in the second round, 47th overall.

Dad did well, but bounced around as a complementary player, never catching more than 34 passes in a season and totaling eight career touchdowns. His son has ambitions to be a primary player.

He’s impressed enough in his limited moments as a wideout to get Carroll running up stairs, and offensive coordinator Darrell Bevell plotting routes for him.

“There was so much talk about the special-teams aspect that it kind of took precedence,” he said. “After watching him the first day, it’s like, ‘Oh, this guy’s not just a kick returner. This guy’s the full package.’

Training camp, especially with the Seahawks, can be compelling because of the discovery of the proverbial diamonds in the rough. And there’s the polished gem that compels stares.