Many questions, few answers for Sounders

Osvaldo Alonso and Gonzalo Pineda may have to sit out Wednesday’s Champions League game in Vancouver after injuries in the 3-0 MLS loss to the Whitecaps. 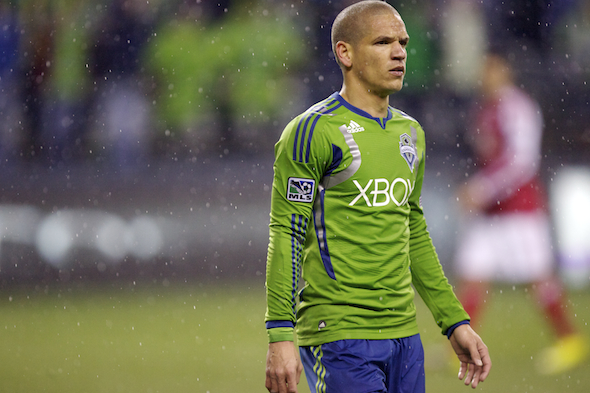 TUKWILA—Hours after announcing the signing of new Austrian midfielder Andreas Ivanschitz from Spanish club Levante, the Sounders were on their way north for their first CONCACAF Champions League group stage match against the Vancouver Whitecaps. The Whitecaps shut out Seattle at home Saturday, 3-0.

Vancouver and the Sounders are in Group F, along with reigning Honduran champs C.D. Olimpia. The Sounders double-booked their ticket to the tournament after winning both the U.S. Open Cup and the MLS Supporters’ Shield in 2014. Vancouver qualified after finishing last season with the best record among Canadian teams.

Seattle turned in a dismal performance en route to their recent loss to Vancouver. The Sounders will look to turn things around on the road. They may be hampered, however, by injuries in the midfield. Osvaldo Alonso left Saturday’s match with a hamstring injury, and head coach Sigi Schmid suggested that Alonso will be unavailable for Wednesday’s match.

Gonzalo Pineda may also be observing the proceedings from the technical area. Pineda received a laceration over his left eye against Vancouver courtesy of an errant elbow, and had to leave the match early.

Asked if he would play with the stitches in, Pineda said the decision was Schmid’s to make.

Vengeance, Pineda said, won’t be an issue if he takes the field.

“I have to put this behind me. I’m not one to take revenge, all I want is that my team wins, and that’s the key for us. I won’t do anything crazy.”

Obafemi Martins has returned to full training with the first team, but Schmid would not comment definitively on whether he might play against either Vancouver or the LA Galaxy Sunday. Also absent will be Marco Pappa, regarding whom the Sounders have remained tight-lipped since the Guatemalan midfielder’s arrest for DUI on July 19.

The Sounders recent form doesn’t leave much room for optimism. Still, Schmid maintains that something as simple as scoring a goal may help his team recover from their slump.

“We need to see the ball hit the back of the net one time,” he said, “and then there’ll be this huge thing off our back. Right now it feels like the goal is wrapped in cellophane.”

Anybody have a box cutter?