Jamie Moyer: Hall of Famer and ace off the field

Jamie Moyer never won a Cy Young or any other major on-field award, but he is an all-time ace off the diamond, sweeping all awards for community service and philanthropy. 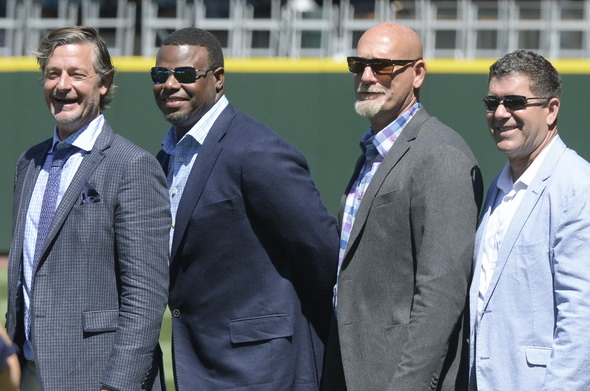 His fellow members, most of whom will be in attendance, are likely to offer some good-natured ribbing over Moyer’s boggling assortment of Bugs Bunny pitches (81 mph fastball, 74 mph curve) that inexplicably baffled hitters for a quarter of a century even if the offerings couldn’t break windows.

Moyer will be lauded for the 145 victories (most in franchise history) he achieved in a Seattle uniform between 1996-06, for his two 20-win seasons (20-6 in 2001, 21-7 in 2003) and his three designations as the Mariners’ Pitcher of the Year by the Seattle chapter of the Baseball Writers Association of America.

It will probably be pointed out that Moyer, nearly a decade after his Aug. 19, 2006 trade to the Philadelphia Phillies, still ranks among the club’s top 10 in appearances, starts, innings, WAR, ERA, WHIP, win percentage, shutouts and strikeouts. And much is likely to be made about his longevity.

Even more rare, Moyer notched 105 of his 269 career victories after turning 40. Only Hall of Famer Phil Niekro won more after breaching the four-decade mark:

Pitchers with 269 wins usually receive Cooperstown consideration. Jim Palmer (268), Bob Feller (266), Carl Hubbell (253), Bob Gibson (251) and Whitey Ford (237) all are in with fewer victories than Moyer. But Moyer never won a Cy Young or any other top award and never led a league in a major pitching category except for the 44 home runs he surrendered in 2004, and the MLB-record 522 he permitted over 25 seasons.

But Moyer would be a first-ballot inductee if the BWAA counted community service and philanthropy.

Each year since 1965, the Hutch Award has been presented in Seattle to the major league player who best exemplifies “the fighting spirit and competitive desire of the legendary leader, Fred Hutchinson,” a local icon who died of lung cancer in 1964. Twelve Hall of Famers have won the Hutch Award, which went to Moyer in 2003.

That same year, Moyer also won the Roberto Clemente Award, presented annually to the major league player who “best exemplifies the game of baseball, sportsmanship, community involvement and the individual’s contribution to his team.”

Moyer made it a trifecta when he won the Lou Gehrig Award, given every year since 1955 to the player who “best exhibits the character and integrity of Lou Gehrig, recognizing contributions in a player’s community and his philanthropy.”

A year later (2004), Moyer added the Branch Rickey Award, named for the man who made it possible for Jackie Robinson to break the color barrier. Created by the Rotary Club of Denver, the award recognizes “outstanding community service and role models for young people.”

Nine individuals have won three of these awards, but only two have won all four, Moyer and Curt Schilling.

Moyer’s recognition came via his involvement with The Moyer Foundation, which he co-founded with his wife, Karen, in 2000 while he was pitching in Seattle.

A public, 501 (c) 3 non-profit, the Moyer Foundation supports programs that help children experiencing grief and family addiction. Since its inception, the foundation has raised millions of dollars through corporate sponsorships and private donations in support of these causes.

Moyer’s Hall of Fame induction ceremony Saturday isn’t likely to dwell much on his civic and philanthropic contributions to the communities, especially Seattle and Philadelphia, where he has been most active. It’s not really the time or the place.

But the newest enshrinee in the Mariners Hall of Fame is a greater citizen than he was a ballplayer, and he was pretty amazing at that.