Thiel: As if Huskies’ coach needs to see Boise St.

Questions about Huskies are many. But they are certain to open in Idaho in three weeks as 10-point underdogs to Boise State. The only part Petersen likes about it is that he’s an underdog. 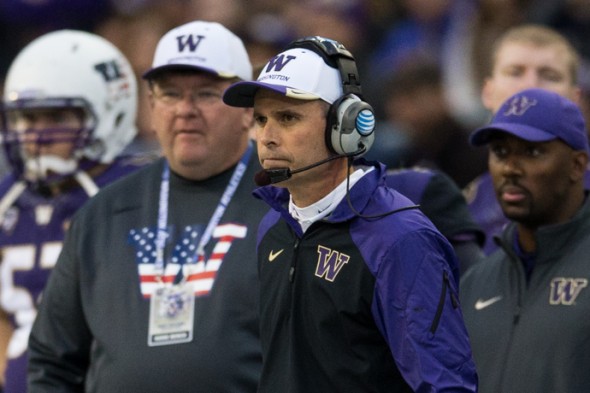 Chris Petersen is stuck going back to Boise State to start his second season at Washington. / Drew Sellers, Sportspress Northwest

He’ll never say it, of course, but for Chris Petersen, playing at Boise State in the opener of his second season as University of Washington football coach couldn’t have been worse for him. Well, I suppose athletic director Scott Woodward could have scheduled SEAL Team 6, but they are booked way out.

Petersen returns Sept. 4 to the place where he was lionized for the better part of 13 years, with a Huskies team that doesn’t yet have a starting quarterback on offense nor much of a clue on defense, nearly half of which is now in the NFL.

He’s coming off a disappointing 8-6 season without expectation of improvement, then draws a team that was 12-2 last year, including beating Pac-12 foe Arizona in the Fiesta Bowl 38-30, a team the Huskies couldn’t handle last season.

The Broncos will be so amped to squeegee the blue turf with the Huskies that Grand Coulee Dam can be given the day off.

Where is East Minion State when the Huskies, 10½-point underdogs, need a cupcake?

Petersen sounded a bit miffed Monday at his  camp-opening presser when he was asked about his transition to UW from what some may see as a lesser program.

“I don’t really consider the program I came from like that,” he said. “I really don’t.”

It’s true that Boise State has left scorch marks up and down major programs, including Oregon and Oklahoma. And the Broncos under Petersen beat Washington 22-12 in the Las Vegas Bowl in 2012. But as long as they remain in the Mountain West Conference, outside the Power Five conferences in the ever-morphing college football “structure,” they will bear an asterisk.

The pedigree issue came up with the Huskies a little last season, when Petersen was tossing off the team some of the more dubious characters assembled by his predecessor, Steve Sarkisian, and struggling with some play-calling and strategy decisions.

The notion was that Petersen was in over his head. You know, like what was said about Don James when he went 6-5, 5-6 in his first two years in Montlake, away from little Kent State.

Some slack must be granted for a coaching staff that was without a doubt stepping up on class to the powerhouse Pac-12 Conference. Petersen seemed to allow as to how he was a bit awe-struck.

“If this can be considered learning, it’s as good as advertised,” he said. “We thought it was going to be really good, and it is really good. The coaching is really good, the players are really good and there’s no, ‘OK, we get to play these guys this week.’

“You put the tape on and you’re thinking you’ve played a really tough team. And you don’t want to see many good players . . . it’s more like, ‘This is what we saw last week.’ That’s probably the main thing that was confirmed. From the inside, it’s really good.”

Now that the first round with Mike Tyson is over, Petersen thinks he and his staff are better prepared.

“I think the second go-round, we’ll be more efficient with how we practice and how we do everything,” he said. “Although we pride ourselves on going back to square one, I think we can move more quickly and hopefully get to the details of the program.

“The guys will know what’s coming in terms of some of the meetings, and embrace it and get it and understand it, as well as our schemes. I talked to a buddy of mine in the NFL and they’re in year two too . . . same thing, it’s different in year two. Coaches are on the same page and the team is on the same page.”

Apparently the grinding of gears during the transition from Sarkisian and Petersen is over. He can now return to the psychological station that makes him all warm and comfy from its familiarity at Boise State — underdog.

“I think even if you’re really good and you’ve done a lot of things, the successful guys always have that underdog mentality,” he said. “They’ve never arrived. They’re still trying to prove it to themselves and others. They’ve got that chip on their shoulders. So, with all of the guys we’ve lost, with the schedule that we have, through all of those things, if that gives (the players) that underdog mentality, then I think that helps us.”

That probably won’t sit well with the generations of fans who remember the James teams that were all knuckles, scabs, jagged teeth and unpleasant breath. But that was long ago, and the oddsmakers don’t lie — the Huskies are big underdogs in a season opener in Idaho.

Hard as that may be for long-timers to accept, it’s even harder for Petersen to know another way. He may have the right team for it this year.