Nelaon Valdez, 31, a well-traveled international from Paraguay,, becomes the fourth newcomer since June 1 to the roster of the Sounders, who are desperate for a goal, much less a win. 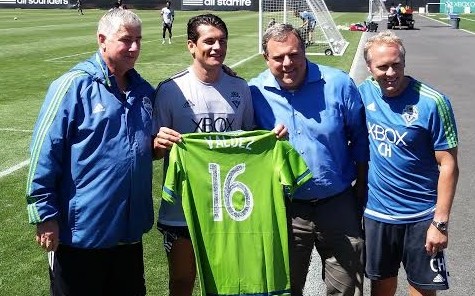 Valdez is fresh off a Copa América campaign in which he scored a single goal against Argentina in the group stage. He joins a Sounders side that has lost seven of its last eight league matches.

“(MLS) is a very interesting league; it’s a very competitive league. I’ve been trying to come to this league for over two years now, even from Valencia (in 2012),” said Valdez through a translator. “This is one of the best teams in the league that is always fighting for the cups, and that is one of the reasons I wanted to come here.”

Valdez, 31, is a journeyman who has played for seven clubs in the last five years. His time at Frankfurt was hampered by a ligament rupture in his knee that limited him to just 10 appearances for the Bundesliga club.

Valdez said that the number of Latin players on the roster, as well as his familiarity with Martins (with whom Valdez played in Russia) would accelerate his integration. Valdez also claimed that his experiences playing on turf for Russia’s Rubin Kazan would help him adapt to CenturyLink’s turf pitch.

“I have already played in Russia before on those types of fields,” he said, “so I’m familiar with it, but as I start playing we’ll see how that goes.”

Sounders GM Garth Lagerway was full of praise for the new forward.

“A player of his caliber just doesn’t come around very much,” said Lagerway. “It’s a credit to our scouting department, which has tracked these guys over multiple years, and we were able to find him at the right time, and I think at the right form.”

As for where Valdez might plug in to the lineup, the Paraguayan said playing up top is his preferred position, but that he is also suited to wing play. The move by Seattle suggests that they hope to always have at least one big-name striker available to plug in, regardless of injury woes, national team call-ups, or Open Cup red card debacles.

With six matches still to play in August, having three marquee forwards available for a 4-4-2 could prove advantageous for a Sounders team that has often been shorthanded this summer.

In order for Valdez to occupy one of Seattle’s three DP slots, Osvaldo Alonso’s contract was bought down using the “targeted allocation money” approved by the league earlier.

Valdez is Seattle’s fourth international signing this summer. The Brazilian midfielder Thomás came first June 1, followed by the Swedish Erik Friberg  June 28. Tuesday, the Sounders announced the signing of Andreas Ivanschitz, “the David Beckham of Austria.” Valdez and Ivanschitz were acquired on free transfers, meaning that the only money paid by the Sounders will be toward the new players’ contracts.

Time will tell if the new additions will jell in time to halt the Sounders’ skid. Seattle faces Sunday the LA Galaxy, which has also bolstered its roster with the acquisition of Liverpool legend Steven Gerrard and Villareal standout Giovanni dos Santos during the summer transfer window.

While Valdez won’t play Sunday, he made it clear that he is eager to start contributing.

“I’m not quite at 100 percent yet, but coach knows what my situation is. I feel good. I’m going to start doing what coach tells me to and use my skills for the benefit of the team.”