The winningest pitcher in Mariners history, Jamie Moyer won over many more people with a poignant salute to those who helped him; but his old team imploded with an eight-run 11th inning. 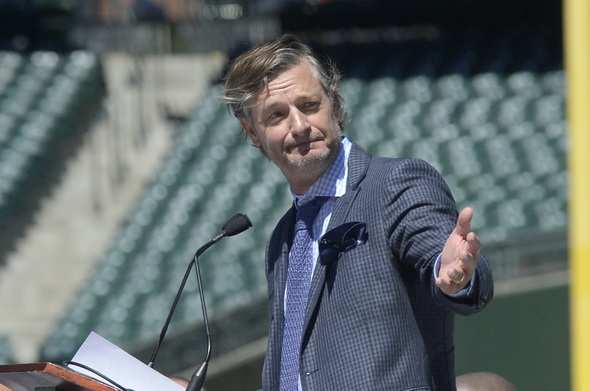 A grateful Jamie Moyer, here at a luncheon Friday, made a couple of unusual acknowledgements in his Sunday speech. / Alan Chitlik, Sportspress Northwest

Needing a break from the often-acidic cloud lingering over sports, I went to Safeco Field Saturday to breathe in some Jamie Moyer.

I felt better. So, I think, did many of the 39,132 on hand. If you missed it, you missed, in the pending absence of playoffs, the highlight so far of the season, simply because Moyer made sure everyone won.

It’s true that this franchise always does better with its past than its present and future. I also realize that the easy cynicism around the Mariners makes their oversized rear-view mirror mockable.

But Moyer did two things with his speech upon entry to the Mariners Hall of Fame that defied cynicism, and showed why it was so easy for the crowd to rise at least five times for standing ovations. Little of it had to do with that fact that he remains the Mariners’ winningest pitcher.

Early on, Moyer expressed his gratitude to the other members of the Hall of Fame on hand — Alvin Davis, Dan Wilson, Ken Griffey Jr., Jay Buhner, Edgar Martinez, Lou Piniella and  Marilyn Niehaus, representing her late husband, Dave – as well as Randy Johnson, who was not present because he was having his jersey retired in Arizona the same day.

Then Moyer did something different. He had videos shown on the stadium’s big screen of three plays he said were representative of all the great defenders who bailed him out of jams over his astonishing 25-year career.

The videos featured a throw by CF Charles Gipson, a home run-saving catch by LF Stan Javier and a double play from David Bell to Bret Boone to John Olerud. Fine moments, but Moyer took the time to edit through thousands of plays to decide on 15 seconds of thanks, which didn’t include any of the Seattle heroes he was joining in the club’s hall.

Afterward, during a pause in what became an 11-3 loss in 11 innings to the Rangers in one of the epic what-the-hell?! episodes in Mariners history, I asked Moyer what went into that gesture.

“Being acknowledged is not what I’m about,” he said of his selection. “I really appreciate the Mariners thinking of me as a Hall of Fame-caliber person. I was taken aback by it.

“My initial reaction was I wanted all my teammates there. Of course, that’s not going to happen. That would be my dream. Today I felt like I was being acknowledged for my career. But if it wasn’t for my teammates, I wouldn’t have been acknowledged.”

So he used the few to thank the many. Then he thanked the thousands.

A few moments later, Moyer, 52, underscored the point. He asked that the Mariners staff compile a list of every teammate he had from 1996 through mid-season 2005 AND a list of every coach, staffer and employee in the same time. As he talked, all of those names scrolled up on either side of the big screen.

For many on the lists, it was probably a fleeting moment of honor, like the credits at the end of movie. But Moyer thought the salute was important to represent all who make major league baseball work.

“I look at myself as a blue-collar player from a blue-collar part of the country (small-town eastern Pennsylvania) where work signified something,” he said. “It identified who you were. I was raised in that environment and taught how to be . . . It helped me when I was told I wasn’t big enough or good enough.”

Thanks to that work ethic and generosity of spirit, Moyer is now a giant when it comes moving ideas and people.

The 15-year presence of the Moyer Foundation in Seattle, and now nationally, offers free camps to children grieving a loss, as well as families affected by addiction. Through hands-on work by Moyer and his wife, Karen, who have six kids and two daughters adopted from Guatemala, the foundation generates millions of dollars in contributions that also aids the Fred Hutchinson Cancer Research Center.

The warm gratitude of crowd was apparent, as was Moyer’s sincere appreciation. He was traded from Seattle at 42 in what most figured was the December of his career. He stretched it six more seasons, and at 49 became the oldest pitcher to win a major league game.

Now he was back, if only briefly. Nevertheless: Permanently. As the closing line of his speech put it:

“Today means I am forever a Seattle Mariner.”

For six innings Sunday, the Mariners bullpen was 2014 brilliant, holding the slugging Texas Rangers lineup scoreless. Then newcomer Rob Rasmussen entered in the 11th inning to give up five singles and a double without retiring a batter. A well-played game was burnt to a crisp, and the Rangers won 11-3 (box score), breaking a six-game losing streak to the Mariners.

The loss was the Mariners’ league-leading 20th this season in the opponents’ last at-bat. The season-long late drama has worn down the bullpen, to the point where manager Lloyd McClendon refused to use closer Carson Smith, who would have entered his fourth game in the past five.

Rasmussen and Joe Biemel combined to give up eight runs and eight hits.

“Rasmussen probably has been overworked,” said McClendon. “I think he was three out of five coming into this ballgame. For a young kid that’s tough. Beimel was on fumes, he had nothing left. You talk about a gutsy guy on the mound when he had nothing. He came in and tried to get us out of the inning.”

“I just didn’t execute,” Rasmussen said. “Our bullpen did a great job and picked up six innings before I came in there. I needed to pick us up and I just flat-out didn’t execute, especially on that breaking ball. I left a lot of them up.”

But game was lost by the Mariners in the 10th. A two-base error by rookie left fielder Ryan Strausborger on Seth Smith’s sinking liner, and consecutive walks to Nelson Cruz and Robinson Cano — believed to be the first back-to back intentional walks in club history — loaded the bases with two outs.

But Jesus Montero looked at strike three from closer Shawn Tolleson, forcing another inning upon a beleaguered pen.

From a slightly more distant perspective, the game was lost at the July 31 trade deadline, when the Mariners traded away their best right-handed reliever, Mark Lowe.