Seahawks may have a new center in Nowak

The Seahawks had their first scrimmage Saturday, and C Drew Nowak ran with the No.1 unit, impressing Carroll. Also impressing was ex-Huskies WR Kasen Williams: “He’s like the guy we saw coming out of HS.” 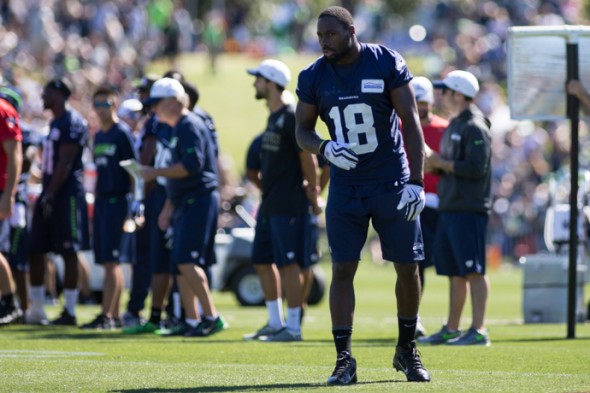 Drew Nowak is making a quality run for the Seahawks starting center job vacated by the trade of veteran Max Unger. A fourth-year vet who had two seasons at Jacksonville, Nowak was with the first unit Saturday in the first scrimmage (albeit no tackling) of training camp and impressed coach Pete Carroll.

“Drew’s doing a really good job right now,” he said of the 6-foot-3, 292-pounder from Western Michigan. “Drew’s getting a great shot to show us he fits together with it. He’s come a long way. He’s another guy that’s come from the other side of the ball just a year ago, so he needs every snap to show he’s understanding and he can communicate.

Although Carroll said last week that incumbent Lem Jeanpierre would open if the season started right away, “that was earlier.”

Other answers by Carroll to questions after the Saturday scrimmage:

Biggest impression? “You know what jumped out at me was the corners really came up and made a bunch of plays. We had three interceptions by corners today, which is great to see. There’s a big competition going on there for that right side, and it was good to see those guys battle and make some things happen.”

Could rookies see playing time in the offensive line? “Could be. The competition is on, so you know anything can happen in a month. Give them four games coming up so we’ll see what happens. We’ve done it before you know, so we can do it again.”

Rookie OG Mark Glowinski? “He’s playing on the left side right now. We’ve moved him over there to get involved in that competition. He’s done some really good things. He got stuck behind (J.R. Sweezy) so we’ll give him a chance to compete and see where he fits in.”

How much can FS Earl Thomas play? “What he’s able to take advantage of is the walkthrough periods. He can get all of his reps there. Now he’s back and at least he’s getting half the time. It’s still a couple weeks away, but we’re getting closer.”

“Everybody needs some work but if there’s anybody that’s tuned in and dialed in, he’s one of those guys. It will still come down to the tackling part. The first time is always a challenge for (rehabbing from injury).”

Similarities between LBs Kevin Pierre-Louis and departed Malcolm Smith? “They’re not similar in some ways but they’re real similar in that they’re both really fast and really athletic. But there’s a different style about the way they play. Kevin is doing great, I’m so excited about the way he’s playing.  I would say a lot of those same things about Malcolm as well. But the fact is, this is his second camp. You know Malcolm had been with me since eighth grade, so he kind of knew our system pretty well.

“No that’s a joke, you guys. I didn’t coach him in eighth grade, just a long time.”

DL Cassius Marsh playing inside? “We’re not doing that. We’re featuring him outside. He really is for us a depth outside guy. The fact that Jordan Hill has stepped up, and Frank Clark can play inside for us too, there’s not that sense of urgency.”

DT Jordan Hill? “He’s a very active player. He really stays on the move all the time, he’s got a really good motor about him; in complement to the way Michael (Bennett) works on the other side. You know a lot of attention goes to Mike, so he had a lot of one-on-ones and he was able to take advantage of that. That happened for Truck (Clinton McDonald) a year ago and he made all kinds of plays. It looked like Jordan just kind of picked right up in that role.”

Former Huskies WR Kasen Williams? “He’s a tough dude. His senior year didn’t look like the senior year that people probably expected, or he expected. He came back from a very, very difficult injury, and he may not have really had all of his confidence back.

He’s battling out here, a real tough, aggressive, physical type of receiver, which we love. You certainly can throw the ball to him and he’s going to make plays. It’s just like the guy he was when we saw him coming out as a senior in high school.”

Moving WR Douglas McNeil III to CB? “He was doing fine at receiver, but he’s 6-3, he’s really long, he’s really fast and he’s got a real motor about him. He’s a real aggressive kid, so I asked him to go ahead and take a look, and see if we can put him on that side of the ball. He’s a little bit taller than (Richard Sherman), he’s a little bit longer. He’s about the same speed. Sherm is taking him under his wing and trying to help him as fast as he can to bring him along.”

The competition at cornerback?  “I want to leave the competition on here for the nickel spot, and (Cary Williams) has got to push too. Cary’s got all of the experience that you would ever want, but I don’t want to just close the door on the other guys. Tharold Simon’s going to come back in a couple weeks now too. It was great to see (Mohammed) Seisay make a good play today. He’s starting to gain enough plays where we can start to get an evaluation on him. Will Blackmon is a solid contender over there.

“Marcus Burley is right in the middle of that competition. Tye Smith is showing really coverage skills inside in the one-on-ones, so he’s the third guy in the competition right now.”

“Those guys just being in the same system, same conversation, they know each other really well they can take advantage. Jordan Hill did a lot of work with those guys last year too, and then we’d be breaking in Frank Clark if Frank can get in to that group. Frank’s going to get a chance. I want to make sure that we see him inside with those guys to see what he brings. We don’t have anybody as fast as him inside, and he’s very aggressive.”