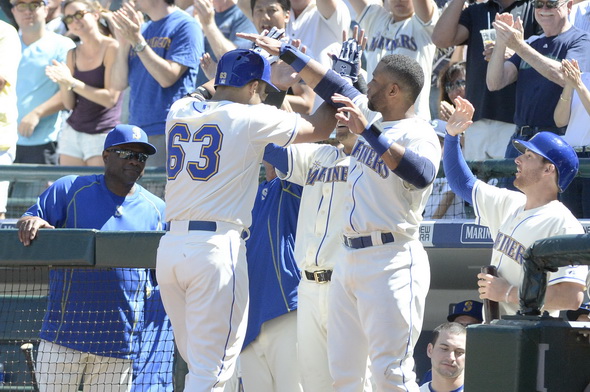 Jesus Montero and Nelson Cruz smacked home runs and Felix Hernandez continued his long mastery of the Texas Rangers as the Mariners (52-60) won 4-2 Sunday in front of 29,939 at Safeco Field to take the series 2-1. Hernandez, who fell behind 2-0 after three innings, tied Pittsburgh’s Gerrit Cole for the most wins in the majors at 14 (box score).

After Ketel Marte cut the Texas lead to 2-1 in the third with an RBI single, Montero blasted a two-out, two-run homer in the fourth to stake Seattle to a 3-2 lead. Cruz provided the Mariners with an insurance run in the sixth with a solo shot to left, his 33rd of the season.

Cruz matched the Angels’ Mike Trout for the AL lead, extended his hitting streak to 19 games and his extra-base hitting streak to nine. The 19-game streak is the longest by a Mariner since Mike Carp hit in 20 consecutive from July 30-Aug. 21, 2011, and his nine consecutive games with an extra-base hit is the longest since Ken Griffey Jr. had a 10-game streak in 1993. Cruz has 12 home runs since the All-Star break, most in the majors. Only nine of Cruz’s 33 home runs have come at Safeco Field . . . Marte played in center and went 2-for-3 with an RBI and a stolen base at the top of the lineup. The RBI and stolen base were the first of his MLB career.

Hernandez (14-6, 3.11) allowed two runs on six hits with five strikeouts and a walk in giving the Mariners their 65th quality start, second-highest total in the American League. Hernandez, who departed after seven innings with a 4-2 lead, is 94-6 when the Mariners score four or more runs. Hernandez has 15 victories the Rangers, his most against any team. He is also 6-0 in his past six starts against AL West opponents . . . Fernando Rodney threw a shaky but ultimately successful eighth inning and Carson Smith nailed down his 12th save with a less-than-perfect ninth.

“We continue to swing the bats pretty decent. We had some really quality at-bats. As far as  (Nelson Cruz) goes,  I don’t know where we’d be without him. His productivity is unbelievable. His numbers are almost jaw dropping” — Manager Lloyd McClendon.

“I was just looking for a fastball all the way. He hung that pitch in there and I hit it all the way. I was just trying to hit the ball hard. I’m just happy to help the team win and I’m happy to be here” — Montero.

The Mariners have won five of their past seven, seven of their past nine against Texas and are 6-3 following a four-game losing streak . . . The Mariners improved to 24-32 at Safeco Field, to 12-16-8 in series played and 16-21 in day games . . . OF Franklin Gutierrez was held out of Sunday’s game with the flu . . . LHP James Paxton threw a 25-pitch bullpen session before the game, the first time he’s worked off a mound since going on the disabled list May 28 with an injury to his left middle finger. The Mariners don’t have a timetable for Paxton’s return.

The Mariners begin a three-game series with the Baltimore Orioles at 7:05 p.m. Monday at Safeco Field. LHP Vidal Nuno (0-0, 2.99) makes his second start since joining the rotation and will oppose RHP Chris Tillman (8-7, 4.35).