With 6-7 Jimmy Graham in with fellow TE Luke Willson at 6-5, the Seahawks can potentially deploy them with 6-5 WR Chris Matthews and take every rebound north of the Portland Trail Blazers. 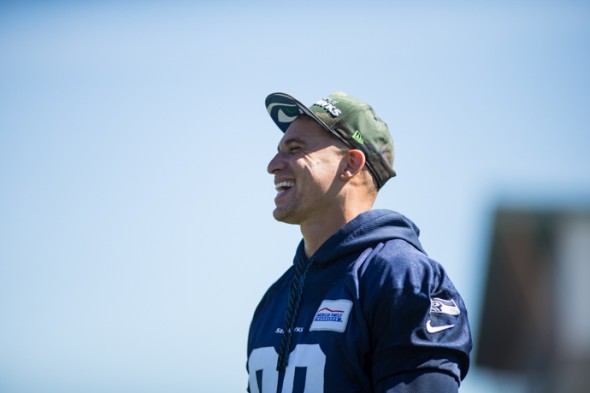 RENTON — When WR Percy Harvin was still a dream instead of a headache, Seahawks coach Pete Carroll fancifully compared his top four receivers to an Olympic 400-meter relay team. As Seahawks fans know, the baton was dropped.

Carroll didn’t say that, but I’m comfortable imagining in the fake-season opener against the Denver Broncos Friday night at the Clink a lineup that includes all three Blake Griffin-wannabes going up for a Russell Wilson pass at the goal line.

I’m also comfortable imagining in the Super Bowl any of them going for a pass at second-and-goal at the 1-yard line.

I know Twelves are saying it’s too soon to think back to the horror, but let’s be honest: Wasn’t there about a half-dozen Seahawks names you would have put ahead of WR Ricardo Lockette to catch a slant pass in traffic?

It was not coincidence that the Seahawks’ biggest move of the offseason was the first move, to fix the goal-line catch problem by trading for Graham.

“I’m looking forward to it,” said, Willson, understating by about a half-mile the excitement the offense has about increased production. “Not sure when it’s going to open up, but I’m really excited for week 1. We have some cool personnel groups and some match-ups that we’ll try to expose defenses with.”

The discerning Seahawks fan will recognize that similar giggling attended the preseason hopes a year ago regarding the options for a healthy Harvin. But the coaches finally are getting around to admitting that trying to get Harvin in the open field, by pass or run, to exploit his speed, was too clumsy for the playbook.

Even though Harvin’s firing was driven largely by his dysfunctional personality, the Seahawks needed to drop the fly sweeps and other exotica — Harvin had a 6.0 yards per catch average (133 yards on 22 receptions) — and return to smashing mouths with Marshawn Lynch and crushing souls with the elusive Wilson.

The addition of Graham requires no additional turbochargers, spoilers or mud flaps.

“The cool part about Jimmy is we can plug him in,” said offensive coordinator Darrell Bevell. “We don’t have to do anything special. He’s special as a player, just by being able to fit in. We don’t have to target him.

“We can run the same routes we’ve been running. The QB knows where he is at all times, so the ball probably will be going more in that direction. We’re not straying very far at all (from the standard play calling).”

The Seahawks likely will unveil nothing much Friday, certainly not alley-oops to Graham, Willson or Matthews (watch for them in Week 2 at Green Bay). In fact, Matthews, a practice squad refugee, is not a guarantee to make the team, although his four catches led all Seattle receivers in the Super Bowl — to the surprise of nearly every mammal on the planet.

Astonishing as that was, those were his only four catches of the season — and represented a third of Seattle’s 12 completions, none of which went to tight ends. For the 2014 regular season, four Seahawks tight ends –Willson, Cooper Helfet, Tony Moeaki and Zach Miller — combined for 48 catches in 84 targets, so it’s not as if their pass-catching was an afterthought.

Bevell offered no real insight into how such oddness piled up.

“As the tight ends know, it just depends sometimes on how the games are going,” he said. “Sometimes I think Zach ends up having six catches in a game, then the next game he ends up with zero. It could be match-ups, could be game plan, could be coverage, those different elements that come into effect.”

That was then. For 2015 now at tight end, Moeaki and Miller are gone, Graham and Willson are 1-2, and Helfet and injury holdover Anthony McCoy seek the third spot.

Matthews represents the prototypical tall, long receiver that Carroll has always favored but hasn’t really had with the Seahawks. Judging by the remarks of Bevell, there is no assurance Matthews, a year ago a rookie find from the Canadian Football League out of Los Angeles, is the answer.

“He has ability—there’s no question,” he said. ” He’s got size, he’s got great catch radius, all that. But we want to make sure he’s showing up each and every day. That’s what I’ve talked to him about every day.

“We don’t want to have a situation where we come out here and he has one good day and then he disappears for two or three. Then, ‘Oh, there he is again, he’s out here.’ We want to make him make himself be known . . . if for some reason he wasn’t here, everyone would know that he’s missing. That’s what we’re trying to get with him.”

If he develops into a consistent threat, a two-tight end formation that also includes Matthews at wideout would make it hard for average NFL cornerbacks to see light, much less ball.

“You’d think down in the red zone would be a place where something like that shows up,” Bevell said, “where space is more critical and you’re kind of throwing to spots. So have opportunities if you need to throw to back pylons, front pylons, back five (yards in the end zone) kind of throws.

“You can throw them high and they can create space for themselves. We want to make that show up.”

Between the 20s, Willson figures the offensive choices are equally disruptive.

“The unique thing for us is when we have two tight ends in, we still have our whole offense in because our tight ends can run,” he said. “Some teams have tight ends who are strictly blockers. We have guys who can do it all — one play a guy stretches a seam, the next play it’s outside zone.

“That’s tough part for defenses — when we have tight ends with speed, a defense might want to drop in a nickel back. But doing that really opens up our run game for Marshawn.”

Should the Seahawks also find need for a putback score off the glass, they have the front line for the job.

The Seahawks are celebrating 40 seasons in the NFL by having fans vote for their favorite  players throughout the season.

Voting began Wednesday on Seahawks.com/Top40 and continues through Tuesday.  The 40 players with the most votes will be revealed and recognized in a halftime ceremony at the regular-season home opener Sept. 27 vs. Chicago.

The Seahawks also launched  a new website dedicated to the history and traditions of the team including archived videos, images, schedules, rosters, game notes and other chronological articles.

Prior to each home game, the team will publish four years of team history beginning with 1976.  The living museum provides a narrative and evolution of the franchise.  New features and content will be added to the site regularly.

Visit History.Seahawks.com to view the site and records from 1976-1979.