The surprise signing of Roman Torres will complicate the playing life of Brad Evans, who was moved to a position he didn’t like Sunday. Now what? 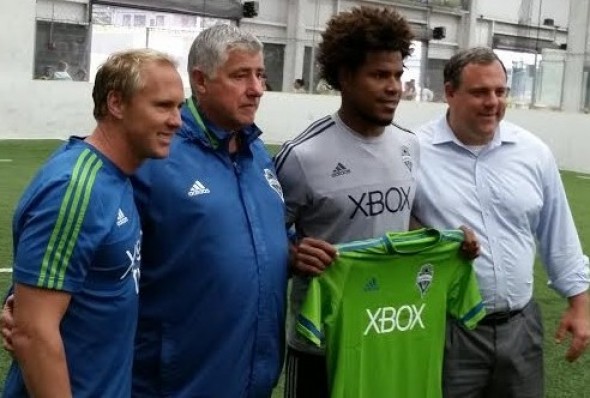 The signing of Róman Torres will bring size, physicality, and an aerial threat to the Seattle Sounders. It may also bring instability to Seattle captain Brad Evans’ role on the pitch.

Evans was moved to center back at the beginning of the season, a position he had not played before. With the signing of Torres, however, it seems that Evans may be pushed aside (literally, perhaps, to left back) in favor of the taller, heavier Panamanian.

Evans played a defensive midfield role alongside Erik Friberg in the 4-2-3-1 formation that was used in a 3-1 loss to LA Sunday. After the match, Evans expressed discomfort in the position.

“(I was) out of sorts on most occasions, not comfortable, but I was asked to play there and said yes,” said Evans.

Sounders GM Garth Lagerway did not characterize Torres’ addition as a replacement for Evans.

“I think Brad Evans has done a nice job playing center back for us,” said Lagerway. “This was a question of having a good player that became available and a deal that we couldn’t pass up on. By doing it, I think this gives us a little more tactical flexibility.”

Lagerway claimed that the final decision on such matters lay with head coach Sigi Schmid.

“My job is to give my coach options. What he does with those options is up to him,” said Lagerway.

Schmid, for his part, also had praise for his captain’s performance in the back line.

“I think Brad has played well at center back, he really adjusted to the position,” said Schmid Wednesday. “It’s just another option. Right now, with Ozzie (Alonso) being injured, we used Brad in the midfield in the last game, so it gives us that option to push Brad up to midfielder.”

In the short term, Evans’ presence in the midfield helps fill a crucial gap, but it seems that a serious rearrangement of the starting 11 may be on the horizon in the wake of the Sounders’ slew of signings this summer.

The Brazilian Thomás and the Swedish Erik Friberg were joined last week by Paraguayan Nelson Valdez. Thomás and Friberg are already contributing in regular starting roles, and Schmid claimed upon Valdez’ arrival that he would be ready to play against Orlando City Sunday (though he would not comment how many minutes Valdez might play).

While there is no set timeline for Torres to take the pitch, he and 2014 MLS defender of the year Chad Marshall are the forerunners for the starting spots at center back. It is clear that the Sounders will want to use the talent and leadership of Evans, rather than keeping him in reserve. But where that might be remains a mystery. Once more, Evans may be asked to step into a new role for his team.

For all the players, however, the battle for playing time just became more competitive.

Midfielder Andreas Ivanschitz, whom the Sounders acquired last week on a free transfer, participated in his first team training Wednesday. Lagerway said he was impressed with Ivanchitz’s conditioning.

“He might be, of all the guys we’ve signed, the guy closest to being ready to come in and contribute,” said Lagerway.

“I’m feeling great being out with the team, being back on the pitch,” said Ivanschitz Wednesday. “I’m really enjoying it.”

The former Levante man said that while he was eager to play, improving his fitness was his current objective after a long off-season.

“It’s very important for me to get in good shape, to feel match-ready, so that’s the main target at the moment.”

Ivanschitz joins a Seattle team that has lost eight of its last nine matches and will need a late-season push to stay relevant in the playoff race. Still, Ivanschitz was confident that his new team would be able to move forward.

“The last games didn’t go well, but this happens. I think there is some great quality in this team and I’m really sure that we will win some games in the next weeks.”