Nelson Cruz sits atop the major league leader board in a number of offensive categories, including home runs and hits — an extremely rare combination. 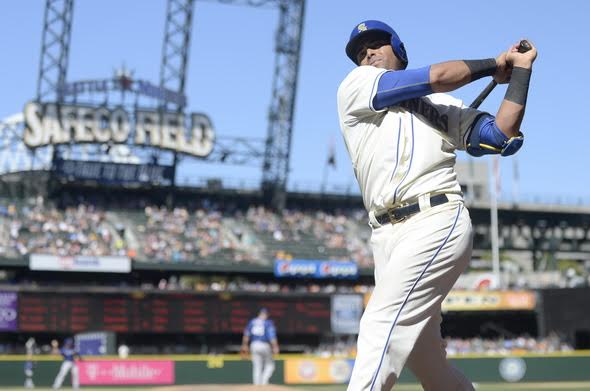 As the architect of the Mariners, Jack Zduriencik doesn’t have much to preen about. Too many players – Justin Smoak and Dustin Ackley, to cite two discards from whom much was expected – have failed to develop under his command, and too many others have emerged as nothing special. When the Mariners cut Zduriencik loose, probably in early October despite the two-year contract he signed a year ago, his success stories will barely fill in a thimble.

But say this for Zduriencik: He can claim that, as GM, he out-performed Bill Bavasi. He signed Nelson Cruz, the only position player on Seattle’s 2015 roster who has out-played his contract, which is saying something since the contract is four years and $57 million.

If the Mariners didn’t rank 15th in the American League in on-base percentage (.302), meaning if Robinson Cano hadn’t forgotten how to hit in the first half, Cruz would be a Triple Crown candidate. But he certainly controls what he can.

Cruz is also working on a majors-best 21-game hitting streak and a 23-game streak of reaching base.

None of that is going to get the Mariners into the postseason, which, unless a miracle is in the offing, they’ll miss for the 14th consecutive season. But it will get Cruz some MVP votes and an almost unique place in baseball history if he can maintain his leadership in two stats.

Home run hitters such as Cruz – nine of his 34 have traveled 440-plus feet, most such blasts in the majors – rarely also lead in base hits. The last to do so was Jim Rice of the Boston Red Sox in 1978.

Since 1914, only three players have topped the majors in home runs and hits, and only nine have ever led a league, none since Dante Bichette of the Colorado Rockies 20 years ago. Cruz can become the fourth and 10th, respectively.

Six of the listed players – Hornsby, Gehrig, Klein, Medwick, Yastrzemski and Rice – are in the Hall of Fame.

If Cruz, who didn’t play in Hisashi Iwakuma’s no-hitter Wednesday due to neck spasms, winds up leading in home runs, he will become the first to do so in back-to-back years since Jose Bautista in 2010 and 2011. Cruz hit 40 last year playing for the Baltimore Orioles. He would also become the first Seattle player to lead the American League in hits since Ichiro in 2010 (214).

Not a no-hit candidate

There have been 19 no-hitters (team and individual) since the start of the 2012 season, and four were at Safeco Field. No other major-league ballpark has seen more than two no-hitters over that span and the only parks with more than one are Nationals Park in Washington, D.C. and AT&T Park in San Francisco.

At 34, Iwakuma is the oldest American League pitcher to throw his first no-hitter since 36-year-old David Cone delivered a perfect game against the Montreal Expos in 1999.

Unlike Nolan Ryan, who not only threw seven no-hitters and had five others busted up in the ninth inning, Iwakuma had never before Wednesday posed even a remote threat to throw one. Iwakuma’s longest no-hit bid before he blanked the Baltimore Orioles 3-0 was a mere 4.1 hitless innings against the Minnesota Twins three years ago. ‘Kuma’s previous longest no-hit bids:

Not only that, but the no-hitter was also Iwakuma’s first major league complete game (88th career start). That made Iwakuma the 17th pitcher (since 1914) to toss a no-hitter in his first career complete game and the first to do so since Philip Humber of the Chicago White Sox threw a perfect game at Safeco Field April 21, 2012.