New Sounders have a party; how about a goal?

Sounders management tried to dress up its dreary summer by introducing its four new international players at a supporters party at team headquarters Thursday. Nice, but . . . so? 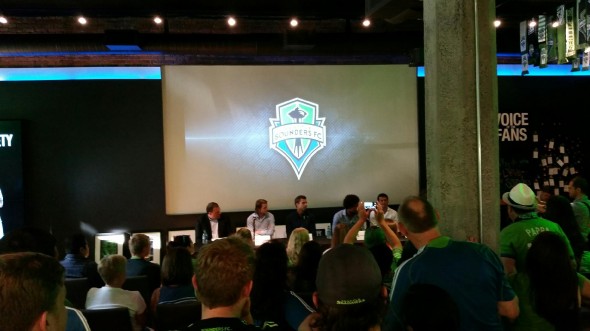 It was a ritzy moment in an otherwise drab summer as the Seattle Sounders unveiled their four summer transfers to the public at a supporters party Thursday at the club’s Pioneer Square headquarters.  Midfielders Erik Friberg and Andreas Ivanschitz joined more recent signing Róman Torres and new DP Nelson Valdez as they addressed fans and signed autographs.

The four players represented months of legwork by Sounders GM Garth Lagerway and Seattle’s front office. The additions are designed to address what were revealed to be deficiencies in a team that has lost eight of its last nine matches, scoring three goals in the span.

Friberg and Ivanschitz are meant to help with depth in the midfield, an area where the Sounders have often been bullied recently. Torres, the Panamanian national team captain, will look to help shore up a back line that has conceded 16 goals since June 20. Valdez’s task is to score goals as a forward or attacking midfielder, especially given the long-absent Obafemi Martins and Clint Dempsey.

The new additions represent savvy accounting by the front office, as well. Valdez and Ivanschitz were acquired on free transfers from their parent clubs, while Osvaldo Alonso’s DP slot was vacated after his contract was bought down with “targeted allocation money” to make room for Valdez. Torres’ purchase also utilized allocation money.

While the moves off the field have been impressive and comprehensive, the play on the field has not as the Sounders have been compromised by absences due to injuries, national team call-ups and suspensions. Martins has returned to full training with the first team after his injury in an Open Cup match in mid-June, but Dempsey has been listed as questionable for the Sunday match against Orlando City with a hamstring strain and did not participate in regular practice Wednesday.

While the front office and head coach Sigi Schmid have repeatedly emphasized that it will take time for the new acquisitions to contribute on the field, the increasing air of finding something — anything — to break the recent run of form has been palpable. Friberg debuted the same week he arrived at training, despite having his fitness initially assessed by Schmid as “75 to 80 percent” ready to play in a match.

Friberg contributed, netting an assist in the first minute in a 3-1 loss to LA.

“(My play) is better and better,” said Friberg Thursday. “It’s hard when you come from five weeks of without touching the ball, it’s a little bit up and down.”

Friberg said that while he was happy to notch his assist, team success was important.

“It doesn’t really matter who does the assist or the goals, we just need to score,” he said.

Orlando City comes to Seattle hungry for a result as well. The expansion club is winless in their last two matches that included a 4-1 drubbing in Toronto. DP and former World Player of the Year Kaká has scored nine goals in 22 appearances this season, and will look to take advantage of a Sounders team reeling both in the standings and the MLS power rankings.