Martins returns to score twice and lead the Sounders to a 4-0 wipe-out of expansion Orlando City, Valdez and Thomas scored their first Seattle goals as well. 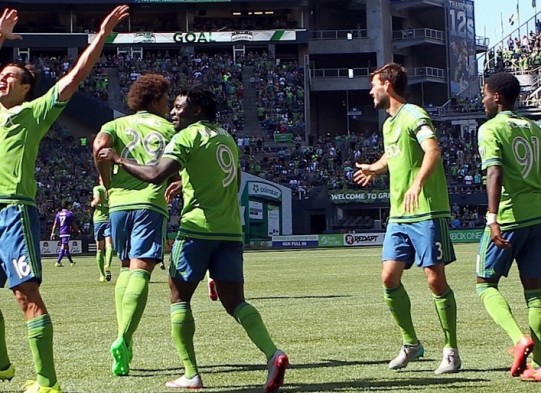 Obafemi Martins, with two goals, led the party during the Sounders’ game and after. / SoundersFC.com

Earlier in the week, the Sounders held a party to celebrate the arrival of its four international acquisitions this summer. The real party, however, occurred in the stands of CenturyLink Field Sunday: Obafemi Martins scored two goals in his return from injury and recent signings Nelson Valdez and Thomás bagged their first goals in Rave Green as Seattle defeated Orlando City, 4-0.

Martins’ return to the starting lineup after a two-month layoff was met with raucous cheers from a crowd that hasn’t had much to shout about this summer. Seattle entered the match having lost eight of its nine league matches since Martins’ injury in mid-June, dropping from 1st to 14th in the MLS power rankings.

“Oba’s being on the park obviously helps us — it gives everybody around the team a little more confidence,” said Sounders head coach Sigi Schmid. Schmid isn’t wrong; the Sounders (11-12-2) are 9-3 when Martins plays and 2-9-2 without him.

“A player like that demands respect from the other team,” he said. “Oba is a player where the other team has a team talk beforehand. It’s the responsibility of both center backs and also of the defensive midfielder. When that gets in the back of guys’ minds they start to lose track of what else is going on on the field.”

Seattle’s lineup also featured new DP Valdez as a starting forward (Clint Dempsey remained absent due to a hamstring injury). Román Torres made his club debut at center back, pushing Brad Evans into the midfield, a move Schmid hinted Wednesday would occur.

In the 17th minute, Martins showed the fans what they had been missing. Working a short one-two with Lamar Neagle in traffic, the Sounders’ leading scorer muscled his way through the back line and finished a left-footed effort into the net to bring the 40,453 to their feet.

Orlando City (7-11-7) had a difficult time dealing with a swarming Seattle defense. Bolstered by Torres and with Oniel Fisher starting at left back after proving himself worthy in recent fixtures, the Sounders were quick to put numbers behind the ball and slow up Orlando’s counter attacks. Tyrone Mears and Chad Marshall led a physical defensive effort that bullied the Lions in the midfield and defensive third.

Orlando star Kaká was frustrated at every turn. Several times he was shut down by a coordinated defensive effort from the Sounders, including having the ball snatched from under his nose by Evans, who seemed to quickly readjust to midfield play. Seattle’s defense proved that even all-time greats can only do so much without an opportunity to play with the ball at their feet.

“A good player like that is going to find space,” said Evans of the former World Player of the Year. “When he did find space, it was out wide, so he knew that he wasn’t getting enough service inside, and that’s something that we talked about” denying him.

The Lions’ woes increased in the 40th minute. Tyler Turner, already in the book for a reckless late challenge against Valdez, picked up a second yellow for a tackle to the back of Lamar Neagle. Referee Kevin Stott sent Turner for an early shower, and the Lions were shorthanded the rest of the way.

Valdez notched his first goal in the 51st minute. Erik Friberg served in a cross which found the Paraguayan’s head. Valdez finished with precision, redirecting the ball into the top right corner of the net to make it 2-0 while recording a rare Seattle set piece goal.

Martins picked up his second goal in the 62nd minute. Receiving a pass on the run, Martins chipped the flailing Orlando keeper Tally Hall before recovering the ball and stomping it into the net.

Thomás drove the in the final dagger in stoppage time. As Torres blasted a long ball from the defensive third to his feet, Thomás dribbled to the right before cutting a shot back to the left past a rooted Hall to give the fans a parting gift.

The Sounders hope to use the victory to reverse their summer fortunes and stay in the playoff race. They stand in 6th place, just above the cutoff line for the postseason, and will face a tough schedule over their remaining nine matches.

Rest may become an issue for Seattle, which hosts Honduran side C.D. Olimpia in the CONCACAF Champions League Wednesday and must play the away fixture in Tegucigalpa the following week after a road match against Real Salt Lake.

Schmid claimed that while he didn’t want to let the win go to his players’ heads, the result was a sign of Seattle’s potential if they stay healthy and play to form.