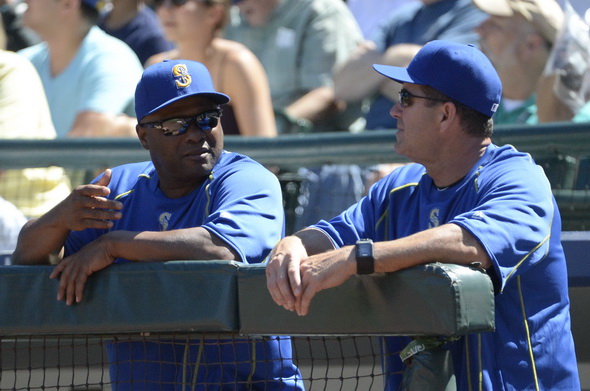 Whether it was from the worst homestand in club history — 2-9 from May 28 to June 7 — or the worst consecutive defeats in team annals — 15-1 and 22-10 in Boston last week — this Mariners season ravages the Seattle baseball soul with more grimness than the appearance of a 56-65 record.

So many moments of failure are so ghastly, especially compared to local and national expectations for the season, that they call to mind the franchise’s expansion-era, clown-car festivals of the 1970s and 1980s. The seasonal roster chaos is mindful of throwing Thanksgiving dinner into a clothes dryer.

Yet players have done enough things right, coupled with MLB’s expanding desire to award participation ribbons to everyone, that they are about a half-dozen games removed from the final wild-card playoff spot.

They won’t get there. Mariners’ bosses knew it when they traded July 31 top reliever Mark Lowe for prospects, signaling a strategic end to a 2015 season in which they were pot-committed to make the playoffs. Teams don’t bid a club-record payroll ($130 million), including years of guaranteed huge salaries to sluggers in their 30s, to play incremental-improvement patty-cake.

The regression features two extremes in game outcomes: A major-league-leading 21 losses in the opponents’ last at-bat, as well as numerous short outings by starting pitchers. Both are high stressors on the team’s strength year ago: The bullpen. Nearly to a man, the pen has under-performed from 2014; only Charlie Furbush and newcomer Lowe were consistently reliable, and Furbush is hurt (overuse?) and Lowe traded.

But the high number of close games is not only because of a regression among relievers, it’s a function of a miserable offense that is next to last in MLB in average with runners in scoring position (.222).

Late-inning failures are profoundly debilitating and have been going on for years. Since 2010, the Mariners have an MLB-high 64 walk-off losses, five more than No. 2 Cincinnati, and have only 25 walk-off wins during the span. That is a lot of baseball trauma.

What compounds the grimness is the singular inability of baseball management to solve the talent shortages by any method other than throwing money at the problem with the hires of Robinson Cano and Nelson Cruz, and the huge extensions to Felix Hernandez and Kyle Seager.

Throwing money is not a bad thing; this is not the NFL, so there are no consequences to magnum spending. But throwing money is the least effective route to building a winner.

In the 14 years since the Mariners were last in the playoffs, three general managers and their staffs have given away more than they have received in transactions. Additionally, they have failed to do with lousy finishes what longtime losers Tampa Bay, Kansas City and now Houston have done — turn high draft picks into major league-plus players.

In a story for ESPN’s Grantland, writer Jonah Keri enumerated the whiffs in player development under general manager Jack Zduriencik that severely limit the Mariners’ ability to fix their shortcomings from within. Basically, every player in the organization who can help the major league team in 2015 is here, and they have about the third-worst record in the American League.

Farm-system prospects typically used by most clubs to get immediate-impact vets aren’t there, as Keri points out, so the Mariners have to trade from the major league roster.

The one move to try to be good in 2015 came in June, when the Mariners acquired OF/1B Mark Trumbo from Arizona (plus emergency starting pitcher Vidal Nuno). In his past 35 games prior to Wednesday, he’s hitting .308 with four homers; in his first 22 games, when the season was in the balance, he hit .189 with one homer.

The cost was reliever Dominic Leone, now in the minors, and Welington Castillo, a backup catcher Seattle earlier acquired from the Cubs for reliever Yoervis Medina. Castillo spent six games with the Mariners, hitting .160 with one homer and decent defense. For the D-backs, in 161 at-bats, he has 13 homers and 31 RBI.

As has happened so many times with the Mariners, Castillo is an example of departed players who flourish elsewhere. It’s doubtful Castillo was here long enough to absorb the toxins or whatever it is that stymies players here, but he’s suddenly gone Pudge Rodriguez in Phoenix, while starting C Mike Zunino is regressing again.

The failure of Zduriencik to stop the slide has become acute because the wild losses are physically damaging players. Not only is Furbush on the DL with a sore arm, another reliever reliable until recently, Joe Beimel, had a horrendous afternoon in Arlington Wednesday, giving up three home runs on four pitches.

He told reporters postgame that he’s worn down.

“I’m so-so,” Beimel said. “I’ve been kind of fatigued the last week or so. It’s kind of like I was throwing through mud. Everything was slow, and I’m not bouncing back. I thought I’d be able to fight through it and keep going and battling. Today was one of those things where I don’t think I’m going to be able to do that anymore.”

Pushing a pitcher like that is, in a word, disgraceful. The Mariners have burned up their relief staff. To be unable to fill out a major league roster with a $130 million payroll so that players don’t get abused is the acme of absurdity.

Behind the dreary current events is a landscape of personnel failures in selection, development and transactions going back years. One way to look at it is the All-Discard Team, players the Mariners have shed since their last playoff team in 2001 who remain productive elsewhere. Yes, I know all the caveats with this exercise:

*Every franchise has an all-discard team; it’s almost impossible to say which has better or worse;

* To get talent, a team has to trade talent;

*Too early to tell outcomes for more recent transactions;

*Some young players mature later; few ways to forecast it.

I also understand that each deal on its own made some sense at the time. But the cumulative effect is to leave the 2015 outfit so bereft of answers that they serve up a 38-year-old reliever to be slaughtered, days after losing games 15-1 and 22-10.

Frankly, I’d take the discard team over the current team in a best-of-seven series. (And I didn’t even include Alex Rodriguez. Just because.)

When the names are in one place, it’s staggering. For fans new to Seattle since 2001, perhaps you now understand.

We discuss this ahead of the pending unkindest cut: When the Blue Jays make the playoffs, as seems likely, for the first time since 1993, the Mariners will inherit the dubious title of MLB franchise gone longest from the postseason.

Think about that. Every team in MLB will have made the playoffs at least once since 2001. With revenue sharing and oodles of TV money, every team has the resources to deliver the playoffs. Long-time dead-enders such as KC, Milwaukee, Pittsburgh and Tampa have come to life.

The Mariners at one time had a nice little streak going — four playoffs in seven years, culminating in a spectacular new ballpark, eight players in the 2001 All-Star Game that Seattle hosted brilliantly and, of course, the 116-win season that still defies sufficient explanation.

And now . . . the team that was the first with a $100 million payroll to lose 100 games can be the first $130 million payroll team to lose 90 games, because they can’t find anyone better than Beimel and Fernando Rodney, both 38 and on fumes, to pitch a good inning of baseball.

The need to replace Jack Zduriencik fairly screams, except the same people who hired him will replace him.