The feel-good story of the Seahawks summer, war vet and ex-Green Beret Nate Boyer, was cut Tuesday. He was unlikely to beat out incumbent long snapper Clint Gresham. 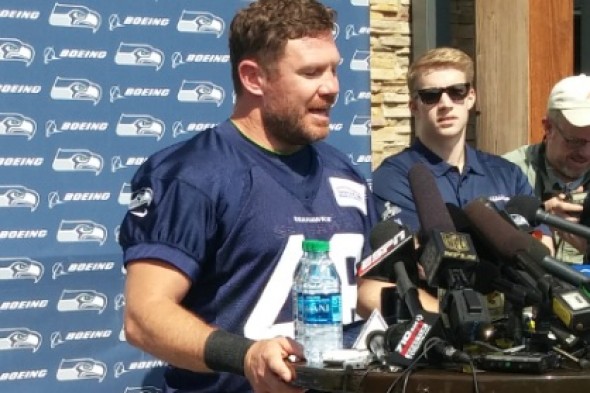 Nate Boyer met the Seattle media for the first time in May. / Art Thiel, Sportspress Northwest

Nate Boyer, the 34-year-old ex-Green Beret who taught himself long-snapping while on duty tours in Iraq and Afghanistan, was cut Tuesday by the Seahawks to make roster room for a quarterback hire, rookie Jake Waters of Kansas State.

Boyer was a feel-good story of the Seahawks summer, but he stood no real chance of supplanting veteran Clint Gresham, a team member since 2010 who signed a three-year deal and is bigger, stronger and more experienced than the 5-foot-11, 220-pound Boyer. The cut was first reported by Fox Sports’ Jay Glazer, who helped train Boyer for the NFL.

Boyer had five snaps in the Seahawks’ exhibition opener Friday, fulfilling a dream to play in an NFL game. He also ran out the 12s flag before the game.

Asked afterward how he felt, he said, “I felt really relaxed. The first half I didn’t play, so my trick there was to try to stay in the flow and not get stiff. I’m 34, you got to keep the wheels greased up.

“But it was fun. It really was. It’s just good to know you got guys next to you that know what they’re doing and busting their ass to try to make the team. So you know you’re going to get everybody’s best.”

Asked if he was nervous, he said, “Not really, to be honest. I thought I would have nerves. I probably had more nerves just leading up to it. I had more nerves for the first snap of practice than I did for this one. So, less than I thought, which is good.”

Boyer was signed as an undrafted free agent in May. At 29 after he finished his service, he walked onto the University of Texas team having never played a down, and was a starter by his senior year.

At the time of the signing, Seahawks general manager John Schneider admits he was smitten with the story.

“You fall in love with guys,” he said, “giving people opportunities for different reasons all the way through the draft. Through a good friend of mine, I’ve become very aware of who this guy is at his core, everything that he represents, and what he’s done every year at Texas.

“He’s just a phenomenal person. He’s a competitor, and he’s tough. He represents a lot of really, really cool things that, quite frankly, I think would be really good for a lot of us to be around. And, he runs down and covers kicks, and he’s really made himself into a legitimate snapper at Texas.”

Which helps explain why Schneider was so choked up when he delivered the news, according to Glazer’s tweet:

Just talked to Seahawks GM John Schneider, said conversation was hard one to have & Nate ended up consoling them not other way around, haha

Coach Pete Carroll said at the time,  “We cherish competitors, we cherish tough guys, we cherish guys that can overcome odds.”

“I didn’t want to regret never playing, and I’d never had the opportunity,” Boyer told USA TODAY Sports. “It was always my favorite sport to watch.”

The Seahawks believe he has the talent to make it with another NFL team, so releasing him now gives him a better shot to catch on elsewhere.

The Seahawks needed the space to sign Waters, a college teammate of rookie Tyler Lockett. In two seasons as a Wildcat, Waters totaled 5,970 passing yards, 40 touchdowns and 16 interceptions, and 796 rushing yards plus 15 scores.

But he missed the final four games of the season with a shoulder injury, which was surgically repaired in January. He hadn’t recovered in time to be ready for the scouting combine and the draft.

He will back up Russell Wilson and R.J. Archer until Tarvaris Jackson recovers from an ankle sprained in the 22-20 loss to the Broncos. Carroll was hoping Jackson would be out only two weeks.

Just don’t go feelin sorry for me people! I’ve been given more opportunities than most, especially those overseas… https://t.co/q7roVJWOB0