Practice contact is so limited by NFL rules that four fake games are the only chance to see players at full speed. And with so many missing from Legion of Boom, the 2015 mystery deepens. 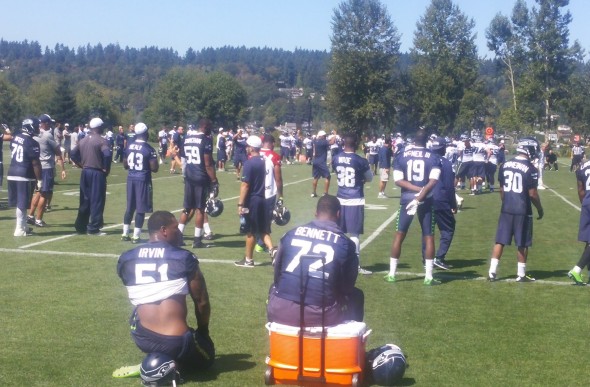 RENTON — What is popularly called “training camp” ended Wednesday for the Seahawks. But the only “camp” aspect is that players must stay in a nice Eastside hotel for a couple of weeks instead of going home every night. Not even a campfire, or sneaking into the girls’ cabins or throwing counselors in the lake.

“Don’t have to stay in the hotel no more,” said Seahawks MLB Bobby Wagner, smiling. “Get to go home and sleep in our beds that we pay a lot of money for.”

Years ago when the Seahawks trained at Eastern Washington University in Cheney, players slept two to a room in cramped dorms, practiced twice a day in 100-degree heat and swallowed a lot of sweat and dust for the privilege of being called lazy fat-asses by mean older men.

In hindsight, the scene was stupid. Deprivation and debilitation rarely made them better players or men, it just peeled off some time from the lengths of their careers.

Given the wealth of health knowledge now available to players and their union, they demanded and received via collective bargaining greatly reduced practice time and better conditions. Good for them.

But the lessened time for the slobberknocker part of football can be bad for coaches because they learn less about players’ capacities. The only permissible days to have full-on tackling and collisions are the four exhibition games.

Pete Carroll is never one to complain about the hand he is dealt;  just tell him there’s a pot to win. But there is an urgency about getting things right in the fake games, especially for the defending NFC champs who are expected to contend again despite personnel mish-mashes in the secondary and the offensive line.

“These are the four days we have to get full-speed football right,” he said this week after home home opener against Denver Friday. “We want to cherish those opportunities and make sure that we make progress. It’s no different than ever, but I’ve made a big deal out of it because I want our guys to really go for it in these games so they can get their football going.

“One the questions you have: How will you tackle guys? We did really well with that. We didn’t do a lot of other things really well, but at least we got that accomplished. We missed four tackles, which is a great first game for our group.”

But in the absence of a number of first-unit vets, much of that tackling was done by backup players desperate to be noticed. Many won’t make it to the season opener Sept. 13, when the Seahawks open in St. Louis. Those defenders who do will be tasked with trying to extend the streak of the Seahawks leading the NFL in defense for a fourth consecutive year.

The last team to be the best three in a row was Minnesota from 1969-71, an easier task then because players usually stayed with their original teams. The Vikings ruled almost 25 years before real free agency. For the Seahawks to maintain excellence over three years when players more easily change teams might be the most remarkable feat of the Carroll era.

But upon the fourth year, SS Kam Chancellor is a camp holdout and FS Earl Thomas and CB Richard Sherman are coming back from significant injuries. The Legion of Boom has temporarily become the Legion of Whom (h/t to Dave Boling of The News Tribune).

Names such as Wil Blackmon, Tharold Simon, Steve Terrell, DeShawn Shead, Tye Smith, Marcus Burley, Dion Bailey and Ronald Martin Jr. are showing up near of the depth charts, most with no professional track record of boom.

The secondary has always been Carroll’s priority in team building, the back-to-front emphasis reflected in the big-money deals for Sherman, Thomas and, yes, Chancellor, as well as Wagner as the overall leader of the defense. But the group behind these guys is as thin and inexperienced as the Seahawks have been under Carroll.

A little glimpse of the potential future was had in the final quarter of the previous season. In the Super Bowl, Thomas (shoulder), Chancellor (knee) and Sherman (elbow) were all playing hurt, Cliff Avril was out with a concussion, and nickel DB Jeremy Lane was gone with a broken arm and torn ACL.

Pats QB Tom Brady took advantage by completing 13 of his final 15 passes, including two for touchdowns. So Wagner begs to differ with the opinion that the game turned on QB Russell Wilson’s goal-line interception.

A noble sentiment, but the defense was nowhere near its top form — which may be the case for the regular-season opener.

I asked Wagner to explain, given that all NFL teams work hard, what has been the difference-maker that has kept the Seattle standard so high. But he wouldn’t accept the premise of the question.

“I don’t think they work like us,” he said. “How hard we practice, the type of guys we have — we’re constantly hungry to get better. You can look at all 31 teams and not find another practice like ours. It’s fun, it’s competitive, we run around a lot.”

Since he’s only been a Seahawk in his pro career, I asked how he knew that.

We’ve had (new) guys who come here and tell us,” he said. “We’re confident about that.

Even after you’ve been paid?

If that is true, and the attitude can be conveyed to the newcomers in a depleted secondary, there is a good chance for continuity. But the gift of talent is a major component of the Legion of Boom.

The full display of that talent is possible on just three more days, one of which is Friday in Kansas City.

If some young people don’t come through, consider the Boom lowered.