Six weeks from now, the Mariners will become the franchise gone longest from the postseason, 14 years. No surprise there: bad years are in the club’s DNA. 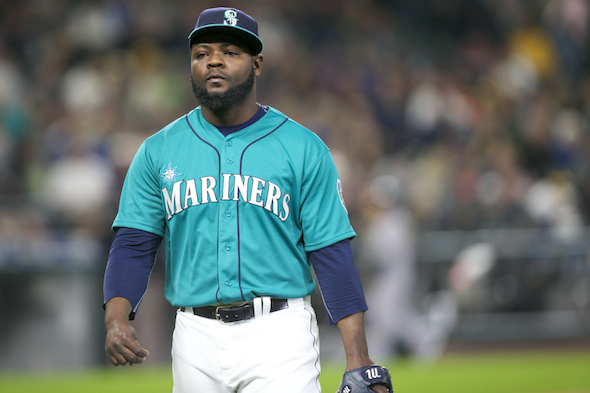 Fernando Rodney was part of one of the oddest walk-off losses in franchise history this week. / Alan Chitlik, Sportspress Northwest

Six weeks and 41 games from now, the Mariners will eclipse the Toronto Blue Jays as the MLB franchise gone the longest from the postseason: 14 friggin’ seasons, or year one (2001) of the Dubya administration.

Icbiro, now 41, was 27. Randy Johnson, five years retired and now in the Hall of Fame, still had eight years left in his tank. Felix Hernandez had yet to turn 15.

Through all of the Bill Bavasi-Jack Zduriencik tumult, eight managers have given Seattle a whirl. No go. And we shouldn’t be counting, but 70 bobblehead giveaways  — or bobblehead fan pacifiers — are also in the books since Seattle’s last postseason.

Expect the obits to include plenty of rehash on the team’s numerous squandered chances, focusing especially on (stats as of Friday) the club’s puny .222 batting average with runners in scoring position, its 21 losses in an opponent’s final at-bat (an MLB-high nine via walk-off), its 21 one-run games, and its nine in extra innings.

Seattle’s lamentable batting ranks are sure to be picked over, as will the past weekend’s astonishing three-game series in Boston. The Mariners yielded a franchise-record 45 runs  to a last-place team, whose No. 9 hitter, Jackie Bradley Jr., became the first in MLB history in that slot with five hits and five runs scored in a single game.

Even with epic losses at Fenway (15-1, 22-10), to say nothing of Joe Beimel yielding historic, if not hysterical, back-to-back-to-back home runs at Texas Wednesday, many tweeters pointed to Monday’s 4-3 loss in Arlington as the season’s nadir, one calling it “one of the saddest days in franchise history.”

That’s saying something, considering that there have been 3,275 losing days in Mariners history, including 281 (nearly two seasons worth) that ended in walk-off defeats. So while opining that Monday’s ranked as one of the “saddest days” in team annals is a bit of a stretch, that one nevertheless holds a special place among the oddest of the 281 walk-offs.

The Mariners and Rangers entered the home ninth tied 3-3. While there is always reason to fear that Fernando Rodney, who has pitched this year as if he’s throwing a medicine ball with his feet mired in mud, will find a way to blow it, there was no way to suspect that he would blow it in quite the manner he did.

Consider: The first batter, Ryan Strausborger, reached on a bunt single. How unlikely was that? Well, Strausborger became the first hitter to reach on a bunt against Rodney since Gregor Blanco of Kansas City beat one out to lead off the eighth Aug. 9, 2010, when Rodney pitched for the Angels.

Given that, who could have possibly predicted that DeLino DeShields would follow Strausborger with another bunt single? Talk about a cluster eff.

Rodney then drilled former Mariner Shin-Soo Choo with a fastball, loading the bases, before walking another ex-Mariner, Adrian Beltre, to lose the game 4-3.

The Mariners have lost many times via walk-off due to home runs, singles, sacrifice flies, wild pitches, walks and errors, including two by Mark McLemore, otherwise a good guy. They have lost a half dozen times on walk-off doubles, twice on walk-off triples, but never on a walk-off balk, so there’s more dubious history still to be made.

The Mariners even once lost — incredibly — on a walk-off strikeout, which must be included among the most stunning and galling walk-off defeats in franchise history, listed here chronologically to demonstrate, if another demonstration is necessary, that bad years are in the Mariners’ DNA.

The Mariners held three leads (1-0, 2-1 and 3-2), taking their final one in the 10th inning when Edgar Martinez scored from third base on a wild pitch by reliever Steve Bedrosian.

However, the Twins loaded the bases in the bottom of the inning with one out. Reliever Mike Jackson threw a slider to Brian Harper that bounced three feet in front and to the right of the plate.

Catcher Dave Valle blocked it, but the ball caromed to his right. Kirby Puckett scored from third. Valle’s throw back to Jackson, covering home, hit Puckett’s leg, and the ball skipped away. That allowed Al Newman to score from second base.

Jackson was charged with an error though he never touched the ball.

“That was a tough situation,” said Seattle manager Jim Lefebvre. “How the hell do we lose like that?”

Lou Piniella kicked everything within range in the dugout. He also ripped the bullpen phone off the wall and lifted a heavy plastic water cooler over his head and tossed it in the dugout toilet – all that after Oakland scored three runs in the ninth to turn a 4-2 Mariner lead into a 5-4 loss.

“Some of these guys aren’t capable,” Piniella fumed. “It’s just that simple. Some guys have shown they can’t do the job.”

Leading 4-2 on a three-run homer by Bret Boone in the third and Jay Buhner’s solo shot in the fourth, the Mariners appeared in good shape until Ruben Sierra led off the ninth with a triple off Tim Leary. Piniella quickly brought in Dennis Powell, who walked pinch hitter Lance Blankenship, batting .202.

“That was the worst of it,” Piniella said. “He walked that guy on four stinking pitches.”

Piniella summoned Jeff Nelson, who further irked Piniella by surrendering a first-pitch single to Mile Aldrete, scoring Sierra and sending Blankenship to third. Terry Steinbach  grounded to shortstop Omar Vizquel, who threw home to get Blankenship, only to have catcher Bill Haselman drop the ball for an error.

With the game even at 4, Craig Paquette was intentionally walked to load the bases and set up a force at any base. Nelson got Scott Lydy to foul out, giving the Mariners a glimmer of an escape. But with a flurry of Oakland signals hinting at a suicide squeeze, a rattled Nelson plunked Mike Bordick to force home the deciding run.

“Disgusting,” Nelson said. “I just came in and tried to be aggressive and nothing worked. That last pitch just completely got away from me. It was terrible.”

Jay Buhner staked the Mariners to a 13-10 lead with a two-run shot off Alan Mills in the ninth at Camden Yards. Pinella stuck with closer Norm Charlton in the bottom half, even though he’d already worked the eighth. Charlton walked Roberto Alomar, struck out Rafael Palmeiro, and ceded a double to Bobby Bonilla.

After retiring Billy Ripken on a fly ball, Charlton walked Cal Ripken to load the bases for Chris Hoiles, the No. 8 hitter batting .225. Charlton quickly turned the count in his favor, going up 1-and-2, and needed another good forkball before ordering party favors. But Charlton missed, left a fastball up and Hoiles deposited it into the seats, giving the Orioles a 14-13 victory.

“It was pitiful,” said Charlton. “I didn’t do my job. Our guys fight back in a great effort, and I let it go to waste. We never should have lost that game.”

At four hours, 20 minutes, this was the longest nine-inning game in Mariners history, and only one minute shy of the major-league record. The Mariners lost despite 20 hits, including an Alex Rodriguez grand slam in the eighth inning.

Minnesota began its ninth-inning comeback off Mike Maddux when Chuck Knoblauch poked a single to left. Rich Becker followed with a run-scoring double, prompting Piniella to yank Maddux in favor of Bobby Ayala, who immediately threw a wild pitch, allowed a sacrifice fly and a double to Terry Steinbach. A steaming Piniella booted Ayala and brought in Charlton with the Mariners still ahead, 10-7.

But Charlton had nothing, walking Roberto Kelly and then surrendering a three-run homer to Marty Cordova, just off the disabled list, to tie the score 10-10. After that, Charlton still couldn’t find the plate, walking Greg Colbrunn and giving up a single to Pat Meares. That brought Knoblauch to the plate, and Charlton brought him home with five pitches.

“A couple of pitches were close,” Charlton said. “But if I’m all over the place, I shouldn’t expect to get those. I’ve got no excuse.”

The Mariners led 5-0 after three innings and were on the verge of sweeping their first series at Oakland since April 2001 before the comeback began against Eddie Guardado (1-2), who blew a save for the third time in 34 chances, and Jeff Nelson, who walked Nick Swisher on a 3-2 pitch.

Mark Kotsay and Eric Chavez both hit two-run doubles before Swisher walked with the bases loaded to force in the final run as the Athletics overcame a four-run ninth-inning deficit. Oakland’s 8-7 win was the first of that kind since July 4, 1957 against the Chicago White Sox.

Swisher, who entered as a pinch hitter in the sixth, was in an 0-for-15 slide when he led off the ninth with Oakland trailing 7-3 and singled off J.J. Putz. Mark Ellis walked, and Guardado relieved and gave up a single to Jason Kendall that loaded the bases.

“For me, it was ugly, a nightmare,” said Guardado.

This is the only game in franchise history – there have been 6,152 since the inaugural season of 1977 through Wednesday — that the Mariners lost by striking out a batter.

The Mariners and Rangers entered the ninth at The Ballpark in Arlington tied 5-5. Journeyman Dan Cortes took over for Seattle and recorded two quick outs, getting Jorge Cantu and Jeff Francoeur on fly balls. Everything might have been good if Cortes hadn’t  walked Mitch Moreland, because that set up one of the bizarre endings in franchise history.

Nelson Cruz came to the plate as a pinch-hitter for Texas with 22 home runs to his credit, but Cortes struck out the slugger swinging. Unfortunately for Cortes, his pitch, ultimately ruled wild, bounced past backup catcher Guillermo Quiroz.

Quiroz retrieved the ball and tried to throw out Cruz, running to first, but the ball sailed down the right-field line. Moreland never broke stride, racing home from first base just ahead of Ichiro’s throw.

“I can’t ever remember losing a game the way I just saw it,” said Seattle manager Daren Brown.