O-line holds up, but Seahawks still lose in KC

Sacks were down, but so were rushing yards as the Seahawks’ re-jiggered offensive line had its first outing together Friday night in Kansas City, where the Chiefs won 14-13. 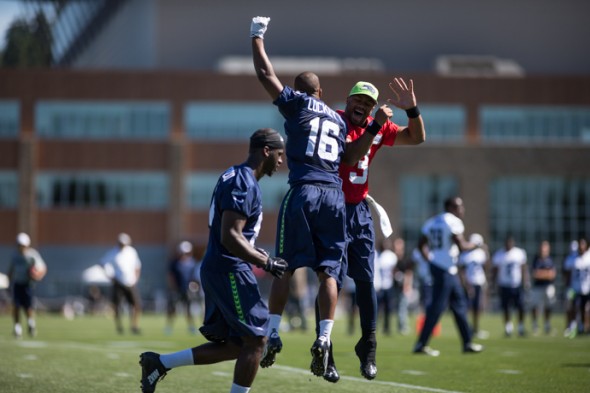 The sacks dropped from seven to two — none against Russell Wilson. The No. 1 defense, despite the absence of most of the Legion of Boom, held Chiefs to a single touchdown and 238 yards while scoring the Seahawks’ only touchdown.

But for whatever it’s worth, Seattle lost its second preseason game 14-13 Friday night in Kansas City’s Arrowhead Stadium (box score), thanks in no small part to a traditional problem — penalties, this time 11 for 105 yards.

Compared to the sloppy 22-20 loss to Denver last week, the offense had some passing success, with heralded TE Jimmy Graham catching three passes for 39 yards, and rookie Tyler Lockett three for 42, his first catches as an NFL receiver. But many of the plays were screens and shorter routes that allowed for quick releases.

For a second game, with 78 yards in 25 attempts, the rushing game still isn’t happening.

The No. 1 offense played the first half but had only one good drive in four possessions. Coach Pete Carroll admitted he was concerned as the Seahawks lost their first two preseason games for the first time since 2002.

“I can’t tell you whole lot about the line (before seeing film) but the fact is, we’re not running the ball well at this time,” he said. “It continues to be an issue. It might change when 24 (Marshawn Lynch) gets in there. But we have to block better.”

The Seahawks opened with the new offensive line devised in practice this week: LT Russell Okung, LG Justin Britt, C Drew Nowak, RG J.R. Sweezy and RT Garry Gilliam. It was Gilliam’s first start at the position and he held up well against one of the NFL’s premier pass rushers, Justin Houston.

But the rushing game, the Seahawks’ biggest weapon, wasn’t getting much push behind the new arrangement. Third-stringer Christine Michael, who did well in pass blocking and had no fumbles, had 27 yards in 10 carries. No. 2 RB Robert Turbin had six yards in four carries. Rookie Thomas Rawls did as well as anyone, 20 yards in four.

“We had a few really nice runs, and some were stopped,” said Wilson. “We were working on the continuity of having in first five (linemen), whoever that may be. The versatility is great but we want to have that continuity.”

The setbacks from penalties thwarted Seattle throughout, including three roughing the passer fouls, only one of which seemed legit.

“I was really pleased with the intensity, the running and the hitting, from the first group to the third,” Carroll said. “As many penalties as we had, it’s a good way to lose a game. With so many big ones, it was too much to overcome.”

The Seahawks scored all of their points in 14 seconds of the second quarter. After Stephen Hauschka kicked a 39-yard field goal, LB Bobby Wagner read QB Alex Smith all the way and picked off a short pass, returning it 25 yards for a touchdown and a 10-7 lead at halftime.

Backup QB R.J. Archer took over in the second half and led Seattle to two field goals, completing five of six passes in one drive and finishing the night 9 of 14 for 83 yards. His two sacks came in the final three minutes as the Seahawks were committed to throwing deep.

Carroll said that the O-line changes made this week are likely to stick with the regular season opener only three weeks away, although a starting center hasn’t been determined between Nowak, who ran with the ones Friday, and Lem Jeanpierre.

“There’s not going to be a lot of movement (of positions) now,” he said. “We’re still developing the centers, and it remains competitive at right tackle. But we played Garry a lot tonight to get him more turns.”

Regarding a report Friday that veteran free agent Evan Mathis, who has been to the last two Pro Bowls as a Philadelphia Eagle, was going to visit team headquarters Saturday, Carroll was evasive.

Then again, when the first-unit offense rushed for only 30 yards in the first half, Mathis may be offered a chance to do more than cough and fill a specimen bottle.

The Seahawks travel to San Diego to play the Chargers at 5 p.m. Saturday.