Another major bullpen meltdown leads to 6-3 Mariners loss; even though Fernando Rodney wasn’t involved, he was fired after the the game anyway. Farquhar demoted, Roenis Elias, Logan Kensing, 33, called up. 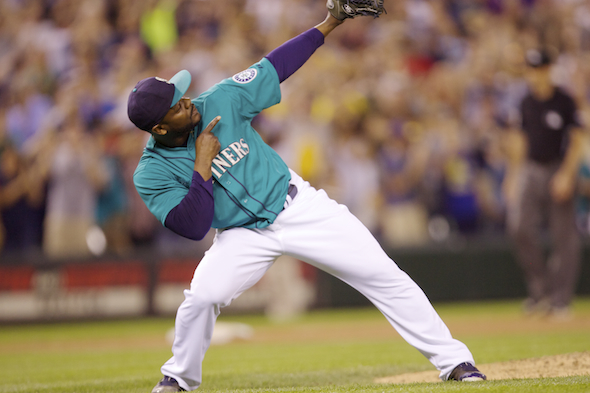 Another bullpen blow-up paved the way for another loss, this time a 6-3 defeat in 10 innings. The Mariners dropped their third game in a row and their sixth in eight tries. The big news came afterward, when manager Lloyd McClendon said veteran closer Fernando Rodney was designated for assignment and Danny Farquhar was sent back to Triple-A.

In the 10th, Farquhar, who came on after struggling closer Carson Smith blew a two-run lead in the ninth to tie at 3, served up a walk to Chicago DH Avisail Garcia with the bases loaded, bringing in the go-ahead run.

LHP Vidal Nuno spent most of time in Seattle in the bullpen. On Saturday he was victimized by it. In his fourth start of the season, the veteran left-hander went a season-best 6.2 innings, allowing five hits and just one run – a second-inning solo home run from rookie Trayce Thompson, younger brother of former WSU basketball star and Golden State Warriors star Klay Thompson.

That would have been enough to earn Nuno his first win of the season on most teams. But Smith blew a save opportunity for the third time this month.. Over the first two games of the Chicago series, the Seattle bullpen has allowed 12 runs in 6.1 innings while walking nine and allowing 11 hits in 29 ABs (.379).

DH Nelson Cruz continues to pile up the numbers, having reached base for the 32nd consecutive game while compiling his league-best 149th hit of the season. LF Franklin Gutierrez did the most damage, going 3-for-4 with two RBIs and a run scored. His two-run double in the sixth gave Seattle its first lead, at 2-1

Words
“No surprise. I know when you’re not doing your job. I’ve been waiting for it . . . I think I’ll get another chance (somewhere). I feel like I’m supposed to pitch again in my career” — Fernando Rodney.

The Mariners will bring up from Tacoma Roenis Elias and move him to the bullpen, along with Logan Kensing, 33 . . . McClendon spent a lot of time discussing his bullpen even before Saturday’s meltdown. McClendon said he’s unwilling to put his top relievers – namely, Carson Smith and Tom Wilhelmsen – into a game in which the Mariners are trailing. “I learned a long time ago, you cannot be afraid to lose a game in order to win three or four down the road,” McClendon said. “That’s just not smart baseball; in fact, it’s dumb.” McClendon, speaking well before Smith blew another save, added that his young closer was thrown into the role too early in his career. “When you lose your closer, like we lose our closer (struggling veteran Fernando Rodney), guys get over-exposed. Carson’s been over-exposed,” McClendon said. “Is he getting better? Yes, he’s getting better. Was he ready for this role? No, he wasn’t ready for this role.” . . .  Mariners RF Mark Trumbo was a late scratch due to a sore left knee.

If baseball trends are really a thing, expect a close game at Safeco Field on Sunday afternoon. Seattle will send RHP Taijuan Walker to the mound. Games are usually close when he starts. Five of the past six starts from Walker (8-7, 4.60 ERA) have been decided by two runs or fewer – and that’s about the only thing predictable when he’s on the mound. Chicago will counter with another lefty starter, the fourth Seattle will have faced in as many games, in John Denks (6-10, 4.61 ERA) in the series finale.