Former Washington coach Steve Sarkisian, now at USC, was drunk and disorderly at a kickoff function for the Trojans Saturday night. He issued an apology. 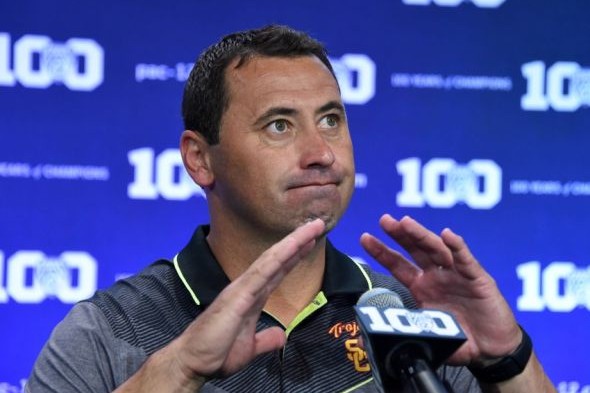 Steve Sarkisian said he won’t do it again. / USC Athletics

Former University of Washington football coach Steve Sarkisian, heading into his second year running the USC Trojans, has apologized for his behavior at a “Salute To Troy” event Saturday night in Los Angeles, during which he was drunk, used foul language and insulted other conference programs.

“Our whole team was embarrassed,” a USC source told ESPN, adding that athletic director Pat Haden, who hired Sarkisian for the job, was forced to intervene and was seen berating Sarkisian following the event.

The source added that Sarkisian, 41, who coached Washington from 2009 to 2013 — his first head coaching job of any kind — criticized USC opponents, saying “they all suck,” and used inappropriate and insulting language while introducing his team to alumni and donors. Sarkisian was an assistant at USC under Pete Carroll before taking the UW job.

“I met with Sarkisian and I expressed my disappointment in the way he represented himself and the university at our Salute to Troy event,” Haden said in a statement released by the school. “While the details of our conversation will remain between us, I am confident he heard my message loud and clear.”

Sarkisian issued an apology in the same statement.

“I sincerely apologize to my players and staff and to our fans for my behavior and my inappropriate language at our kickoff event Saturday night,” Sarkisian said. “I have a responsibility to all of them and I let them down. Pat Haden talked to me after the event about my actions and I assured him this will not happen again.”

USC is ranked No. 10 in the preseason coaches’ poll and was picked to win the Pac-12 championship in last month’s preseason media poll.