Thiel: Mariners get a pause in bullpen mayhem

As the Mariners were blowing another big lead, manager Lloyd McClendon gave the ball to an unlikely reliever, newcomer Logan Kensing, who promptly gave up a two-run homer. Then the story turned. 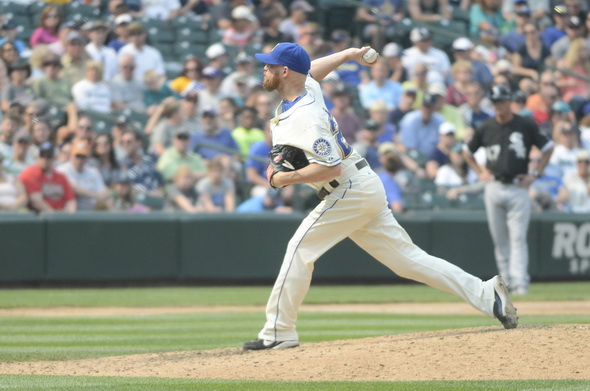 Logan Kensing gave up a two-run homer, but followed with three outs to help save the Mariners from another embarrassment. / Alan Chitlik, Sportspress Northwest

The circus calliope was in full volume at Safeco Field Sunday. The Mariners were gradually losing a 7-1 lead to the Chicago White Sox when Logan Kensing was summoned to relieve imploding starter Taijuan Walker, who later admitted he dared to get a little relaxed with a six-run lead.

Kensing, you may not have heard of. He was the guy sprinting from the dugout to the pen in the second inning, having just arrived with fellow call-up Roenis Ellis by car from Sea-Tac, where he had flown from Denver after pitching an inning in Colorado Springs for AAA Tacoma Saturday night.

He was still a minor leaguer at midnight. Fifteen hours later, he was on the Safeco mound in front of 30,537 trying to hold a 7-4 lead in the sixth inning by staring down Adam LaRoche with a man on and two out.

Four hundred and seven feet later, it was 7-6. A third consecutive Seattle bullpen mega-collapse was as inevitable as olive oil in a Greek restaurant.

It was the first major league appearance by Kensing since June 19, 2013 for Colorado, and only the 26th in MLB since 2008. The chance to get to 27 looked exceedingly dim for a 33-year-old.

“You know your window is shrinking every day, even if you’re good,” said Kensing, a striking figure with shaved head and a full beard.  “You give everything you got until you can’t go any more.”

So Kensing gave it all. He struck out Alexei Ramirez to end the inning, which is when the grim Seattle narrative turned.

Kensing picked up two more outs in the seventh, then issued a walk to Adam Eaton before being relieved by Carson Smith, who delivered the next four outs. Tom Wilhelmsen had a 1-2-3 ninth to preserve an 8-6 win (box score).

Weird. The calliope stopped. Everyone who still cared about the Mariners had assumed the cringe position, then had to unwind.

Kensing, a San Antonio native who was a second-round pick in 2003 out of Texas A&M by the Marlins, offered his mental approach to the difficulty in anticipating baseball developments.

“I can’t say I didn’t expect (to pitch today),” he said. “You learn not to have expectations like that. Because anything can happen at any time.”

Wise fellow. Such an attitude may be useful in the clubhouse as the Mariners figure out in the final five weeks how best to keep from embarrassing themselves.

That’s the only goal, because management gave up on winning July 31 by trading their best healthy reliever, Mark Lowe, which helped dig deeper the sickening trench the worn-down bullpen was in.

It took the bosses three more weeks to figure out their worst reliever, Fernando Rodney, was killing them. He was fired Saturday, and another bust, Danny Farquhar, was demoted to Tacoma to make roster room for Kensing and Elias.

But nobody in management bothered to tell the Rainiers until midnight, when Kensing’s cell phone lit up. The delay wasn’t because they were dithering among riches.

In 32 relief innings in Tacoma, Kensing gave up 29 hits and 10 walks with 25 strikeouts. Not bad, and with a 2.23 ERA, Kensing could not be much worse than most of the current pen occupants. As the Mariners should learn from him, it is best not to have expectations.

Manager Lloyd McClendon pulled Walker after two singles, a double and the LaRoche home run produced what become a five-run sixth inning, and didn’t blink in giving the ball to Kensing, even if he was still breathing hard after running from the dugout to the pen.

Maybe it was the delirium produced by a Mariners (57-67) triumph, but McClendon said he actually likes the bullpen talent level. In case you have not kept up with the whirlwind, besides Kensing, Elias, Smith and Wilhelmsen, that includes Edgar Olmos, Rob Rasmussen and David Rollins. At least for the moment, until the next UPS truck driver with big arms shows up at Safeco.

“We got some guys who very talented, and very young,” he said. “I think we’ll have a bright future. We have good arms. There’s a learning curve. All in all, I think our bullpen will be pretty good.”

Whether his boss, Jack Zduriencik, agrees, and whether either will be around to see that time, is conjecture. The Mariners are out of expectations for this season. They should adopt Kensing’s coping mechanism: One phone call, one out, one inning at a time.

As Kensing put it about his future: “I try not to think about it all.”