Barring the unforeseen, the Seahawks seem to have decided on newbies for three offensive-line positions, including center, where Drew Nowak has ascended — after a fateful conversation with John Schneider. 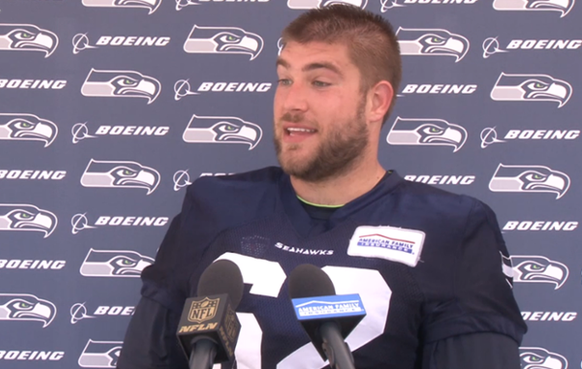 Drew Nowak said he’s been “climbing a mountain” to learn the center position with the Seahawks. / Seahawks.com

RENTON — Barring unforeseen complications, such as injury or finding unspent cash under the NFL salary cap, the mystery meat of the Seahawks training camp, the offensive line, is set. Doesn’t mean it’s good, but it’s what is available. The defensive line of the Rams, whom the Seahawks play in the opener in St. Louis Sept. 13, probably couldn’t be happier.

Stomach linings around Seattle would be helped greatly Saturday in San Diego, where the Seahawks play their third fake game, if the No. 1 offense could score, like, you know, a touchdown. Even if it’s just for looks, and so Pete Carroll isn’t caught with his fingers crossed behind his back.

“We’ll see if (the starting five) can hold it together, and hold off the other guys that are battling with them, but we feel good enough about it,” Carroll said Monday, offering less than a ringing endorsement on the first day back at practice after the 14-13 loss in Kansas City. “We like the way that they mix together. They have a real chance, so we’ll keep that intact again this week and take it one week at a time.”

To review, that means having only two holdovers from last season’s starters: LT Russell Okung and RT J.R. Sweezy. That means there’s a new guy at right tackle, Garry Gilliam, a new guy at left guard, Justin Britt, and a newbie to the entire position of center, Drew Nowak.

That means a lot of green at the point of attack.

Which explains why the Seahawks Saturday had in Pro Bowl free agent guard Evan Mathis, 33, for a physical and a conversation. Monday, they did the same with veteran free agent center Samson Satele, 30, an eight-year veteran who started all 16 games for the Miami Dolphins last season.

Neither left with a contract. This is the time of the NFL calendar when teams discover where they are in trouble. So after a free-agent summer of quiet, the price for such emergency veterans takes a sharp uptick.

The players are likely to go to the highest bidder, which may not be the Seahawks, because they have only about $5 million left under the league’s $143 million per team cap. It’s never wise to spend it all before the season, because a team never knows when it might need an emergency replacement for, say, a strong safety.

“We’re going to keep competing to see who else is there and available, as we try to make our choices,” Carroll said. “You’ll see some guys’ names come up again. We’re continuing to look. We want to know who’s available.”

The Seahawks have never been bashful about starting rookies (see QB Russell Wilson), but three newbies in the same unit?

Here’s how Nowak, an undrafted free agent signed by Jacksonville in 2012, put it Monday.

“I’m at the beginning stages of learning,” he said. “There’s so much more I can do to be better at the position.

“It’s a mountain to climb in the time I’ve been here.”

This is the guy the Seahawks have all but decided on, beating out two vets, Lem Jeanpierre and Patrick Lewis, each of whom started last season when incumbent Max Unger missed 10 games with injuries. Counting Stephen Schilling, who was not asked back, the Seahawks used four centers the past season — and still reached the Super Bowl.

Meanwhile, Nowak was on the practice squad, where he signed on a year ago after being cut by Jacksonville.

The guy is no slouch. An All-America defensive lineman at Western Michigan, he’s 6-feet-2 and 295 pounds, and to hear Carroll tell it, is a good man if you need the bumper torn off a truck.

“He’s very strong — stronger than the guys that we’ve played with over the years,” he said. “He’s got hand strength. He’s a brute in there, a very physical player. He’s really smart. He understands it.

“Of course he’s still learning. This is still new to him. He’s applied himself so well and he’s a good competitor. He made some nice plays, nice blocks, nice combination work that was really obvious.”

He was also graceful enough to avoid tripping on the learning curve.

“Our big discussion with him the last two days is being in a good football position — bent at the knees. At the second level, he gets high and loses blocks late.”

Nowak has also been getting some learnings from Cable in managing what can be overwhelming.

“Basically what he tried to tell me was, ‘Don’t do A through Z at once — learn A, then B, then go to C,'” Nowak said. “Work so you learn something new every day. Get better at something. When you get to Z, then look at the big picture.”

Where is Nowak in the alphabet?

“Somewhere about in the middle,” Cable said.  “All these (young) guys are that way. We never talk about big picture. The challenge for the last couple of weeks is to go at one thing each day.

“If they worry about everything, they screw most everything up. Stay on task. Keep making these steps forward and in a couple of weeks, he’ll be ready to go.”

Two weeks to starting NFL center? If that happens, Cable is assistant coach of the year.

But Nowak is big on the improbable. He likes to tell the story of how he became a Seahawk. A native of the mean dairyland streets of De Pere, WI., same as Seahawks GM John Schneider, both men found themselves on the dais for honors at an annual sports awards dinner in the hometown in June 2014.

“I sat right next to him talking for three hours,” he said. “I knew he was from my hometown but didn’t know him personally. So when I got cut from Jacksonville, he signed me.

“Maybe that (awards dinner conversation) had something to do with it. I’m really lucky he thought enough of me to sign me.”

And if he makes it through the next two fake games to make his first NFL start in St. Louis as a center, the film rights to his story won’t be far behind:

The Seahawks are hopeful that Tarvaris Jackson’s sprained ankle will be healed for the season opener. Carroll seemed unlikely to try to play Jackson in the next two fake games . . . At day 25 of his holdout, Kam Chancellor shows no sign of showing up to the preseason, Carroll said: “Things remain the same at this point.’’