Thiel: Fight on? No. USC’s Sark needs time out

Successful at a young age, Steve Sarkisian seems to think of himself as bulletproof. If the toughest consequence of being drunk in public is some up-downs, USC is enabling his worst aspects. 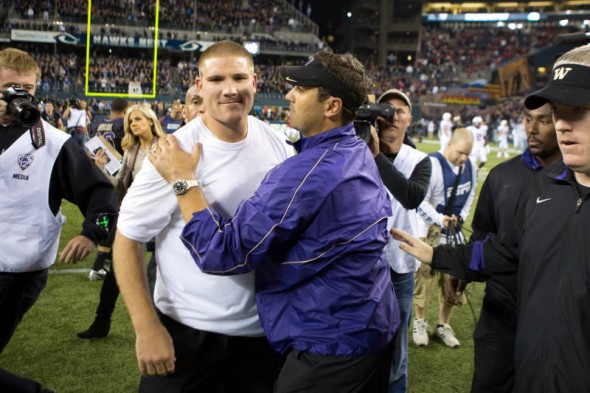 Quite honestly, whenever Steve Sarkisian begins a statement with the phrase, “quite honestly,” there’s a good chance he isn’t being quite honest. Consider that USC’s football coach used his pet phrase in a press conference Tuesday at USC, saying he didn’t have a drinking problem, but was going to undergo “treatment” anyway.

If he isn’t ready to admit that he and booze together are trouble, the former Washington Huskies football coach is better off skipping the treatment and accepting a suspension for being a drunken lout in front of USC boosters Saturday at a campus event. Especially if he chooses to use the “mixing meds and alcohol” crutch — the last refuge of the celebrity excuse-maker.

Even if it were true, he shouldn’t have said so, because it implies poor judgment worse than what is already obvious.

He knew after practice that day that he was going to an important annual function that mandated he be at his best. Not only did he “accidentally” mess up his meds, he didn’t have the self-discipline to check himself before he reached the podium, and perhaps ask that someone take his place because he “felt ill.”

A lack of self-discipline has always been a rap against Sarkisian. His first head-coaching job at any level of football came at the Pac-12 Conference level at Washington, heady stuff for a 34-year-old who blossomed under the mentorship of Pete Carroll. His second job came at USC, one of the nation’s premier programs and schools.

A fella might just get to believe, at 41, he was bulletproof.

And it might just be true, if he suffers no public consequence beyond, “You’ve been a bad boy, Stevie — promise to never do it again.”

So far, Pat Haden, the athletic director who hired him at USC, has given him a stern public scolding. That stands in contrast to what happened 20 years ago at another equally prestigious program, the University of Michigan. Six days after he was jailed for being drunk and belligerent at a restaurant, football coach Gary Moeller was forced to resign.

He was so drunk that instead of keeping him at the Oakland County Jail, police transferred him to a hospital, fearing alcohol poisoning. Afterward, police released a recording of Moeller at the hospital. The partial transcript:

There but for the grace of Troy, went Sark. Not arrested, not fired, not suspended, but at least humiliated — looking stupid in front of his own kids, his recruited kids and their parents who have a reasonable expectation that the head coach should know right from wrong.

This episode is not a mistake. Getting five when two is added to two, that’s a mistake.

In the hall of coaching misdeeds, being drunk and stupid in public is, as long as no one was hurt, not the worst thing. He richly deserves all the mockery, derision and snark.

At least the players knew the gravity of the situation. Asked by Sarkisian what punishment he deserved, they voted on a series of up-downs at practice.

When Sarkisian was at Washington, rumors were steady of his carousing at high-end bars. But because nothing was caught on a video or a police report, the rumors stayed rumors.

But a football-recruiting episode on his watch at Washington, and a bizarre game-day stunt at USC using Haden as stooge, offered indications of a guy looking for a workaround when he it came to rules. The full Neuheisel, as it were.

The $100-bills-in-a-coffee-cup scandal-ette in 2013 developed when a local high school coach alleged that Sarkisian’s prized recruiting coordinator / assistant coach, Tosh Lupoi, poached away from Cal at high cost, gave $4,500 to provide tutorial services for a UW recruit. Lupoi was Sarkisian’s path to “gets” the Huskies no longer were getting.

Even though the Inspector Clouseaus of the NCAA did not recommend a violation, the story — of hiding cash payments in coffee cups and restaurant cushions — was so minor-league loopy that it couldn’t have been made up.

The more troubling episode came in Sarkisian’s first year at USC when, in his second game, Sarkisian was so furious with officiating calls that he summoned Haden from the pressbox to the sideline, imploring him to do something about those mean ol’ refs.

No one who witnessed the episode could recall its like in college football. Talk about the University of Spoiled Children.

Then there was the preseason episode when CB and captain Josh Shaw claimed that both his ankles were injured in a leap from a balcony because he was attempting to rescue a drowning child at an apartment-complex pool. The story sounded like great publicity, so Sarkisian approved its distribution via the school’s sports information department.

The truth came out quickly from eyewitnesses and LAPD: There was no rescue. Shaw was running out of the apartment of his girlfriend, with whom he had an argument. Cops were at the door.

No crime was discovered. But Sarkisian, duped by a player, looked foolish. And by association, so did Haden.

These episodes are linked by a lack of judgment surprising for a major college football coach — or a belief that he thinks he’s bulletproof.

It’s hard to say from a distance whether Sarkisian needs clinical help with an alcohol problem. But he is the last guy I would trust to say he doesn’t have a problem, or that, as he claimed Tuesday, he’s already punishing himself.

In April, a story came out that his wife, Stephanie, had filed for divorce. Two months later, he put up for sale their estate in Rolling Hills for $9.5 million, a year after buying it for $8 million.

Judging by his looks and manner in the video, this is a man under extreme pressure. Haden needs to man up and realize Sarkisian needs time away from football and some serious counseling, for the sake of everyone concerned.

This is not the time to fight on.