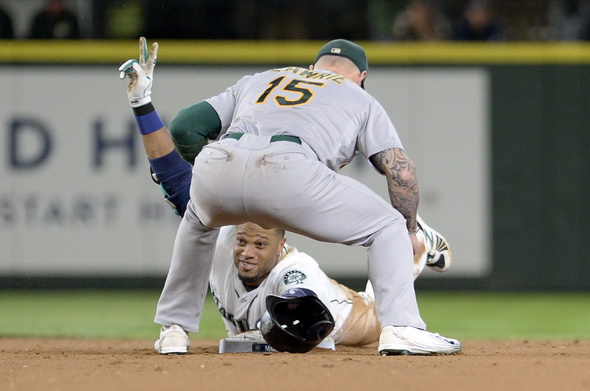 Robinson Cano is safe with a double, making him the first player to hit 30 doubles in each of the first 11 seasons of an MLB career. / Alan Chitlik, Sportspress Northwest

The Mariners turned the table on Oakland on Tuesday night, rallying from a 5-0 deficit to beat the A’s 6-5 at Safeco Field. One day after squandering a 5-0 lead, Seattle used three-run frames in the fourth and fifth to win for the fourth time in 11 games.

Home runs from Nelson Cruz and Logan Morrison sparked the comeback, but it was Austin Jackson’s bases-loaded single in the fifth that completed the rally. After the Mariners took advantage of some control problems from Oakland starter Jesse Chavez, loading the bases on a pair of two-out walks sandwiched around a single, Jackson drove a pitch up the middle to turn a 5-4 deficit into a 6-5 lead.

Rookie LHP Mike Montgomery had his shortest outing of his young career as the A’s picked up right where they left off Monday night. Montgomery couldn’t get out of the second inning, allowing seven hits and five runs in 1.1 innings for a 5-0 lead. (For those scoring at home, or even paying attention these days, that was a 16-0 Oakland advantage over the seven innings that began with Monday’s fifth.)

Bullpen afterthoughts Edgar Olmos and Logan Kensing made Seattle’s relief problems seem like a distant memory as they bailed out Montgomery with 5.1 innings of scoreless relief. The combination of Carson Smith as setup man and Tom Wilhelmsen as closer is 2-for-2, leaving us to wonder: What took so long?

Cruz continues to put up MVP numbers despite his team’s lackluster record. He hit his 38th home run in the fourth inning, sparking the comeback. Morrison and RF Seth Smith, who had been in Southpaw Purgatory for the previous six games, returned to the lineup and paid immediate dividends. Smith went 1 for 2 with a double, while Morrison followed Cruz’s blast with his 13th home run in the fourth. SS Ketel Marte (3 for 5 with a single, a double and a triple) continues to give the offense a shot of youthful juice, while CF Austin Jackson (2 for 4, 2 RBIs) has a .352 batting average over his past 13 games.

“It didn’t look good early. Chavez had it going. The (Nelson) Cruz home run sparked us, it picked us up.” – manager Lloyd McClendo

2B Robinson Cano made a bit of history when his seventh-inning double gave him 30 for the season. He is the first player in MLB to begin a career with 11 consecutive 30-double seasons . . . Five of Seattle’s six runs came with two outs  . . . Montgomery’s season ERA has gone from 1.62 on July 5 to 4.60 in a span of nine starts . . .  In two appearances since getting called up, RHP Logan Kensing allowed just one hit. Kensing made his first MLB appearance since 2013, and only his second since 2009, Sunday and gave up a home run to the first batter he faced. Since then, he has retired 10 of the 12 batters, while striking out five . . . Oakland SS Marcus Semien homered in his first at-bat, marking the third time in his past four at-bats at Safeco Field that he has hit a home run. In four Seattle games this season, Semien is 8 for 16 with three home runs, five RBIs and six runs scored . . .Oakland 2B Brett Lawrie went through a scary moment an hour before the game. Lawrie’s grandmother collapsed on the field near the visitors dugout and had to be taken to a hospital on a stretcher. Lawrie was openly crying while sister Danielle Lawrie, former University of Washington softball star, consoled him. He composed himself, started and went 1 for 3.

Is Felix Hernandez out of gas? Are the innings finally starting to catch up with the Mariners’ 29-year-old ace? Hernandez (14-8, 3.74 ERA) brings an August ERA of 8.18 into Wednesday’s start. His season ERA has swelled by more than a run (from 2.69) in a span of five starts, and he’s already allowed seven or more earned runs in three games this season – matching his combined total from the previous three seasons. Oakland will counter with RHP Chris Bassitt (1-5, 2.48 ERA).