The Sounders traveled a long way for nothing. Deploying a young lineup absent stars who stayed home, they lost 1-0 to Olimpia in the Honduran capital of Tegucigalpa, and lost control of Champions League group. 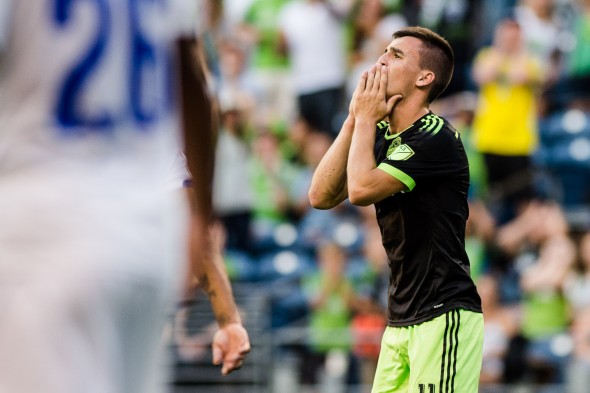 A young Sounders squad, including 22-year-old Aaron Kovar, was at a loss for how to deal with C.D. Olimpia Wednesday. / Sounders FC

Sigi Schmid already hinted that his mind was focused on his team’s clash against Portland Sunday before Seattle’s trip to Honduras to face C.D. Olimpia in the CONCACAF Champions League. In the Honduran capital of Teguchigalpa, that mindset translated to an ineffective lineup and a 1-0 loss.

“With all the injuries we’ve had, we obviously couldn’t bring along a lot of our top players,” said Schmid. “It was a very young team for us out on the field tonight.”

For comparison, Wednesday’s starting squad saw six players under 25. The Sounders team that took apart Orlando City 4-0 August 16 had one.

Asked if he had underestimated Olimpia, Schmid defended his roster selection.

“We brought the players we could bring,” he said. “We’ve had a number of injuries and there was no way we could bring those players, not without the risk of them getting injured again. We have important league matches coming up.”

Some of those absences included Clint Dempsey and Osvaldo Alonso, who have been held out of recent matches due to medical issues. Andreas Ivanchitz, signed to the team earlier this month, has yet to make his Sounders debut due to a quad injury.

Seattle played conservative soccer. Despite bossing possession for 74 percent of the run of play, the Sounders were outshot 10-3.

The match’s lone goal came in the 60th minute. A dangerous ball in the box drew Sounders keeper Troy Perkins out of the net, where he forced an initial save in a collision, before a secondary ball was launched into the back of the net by Alberth Elis.

Perkins construed the goal as a defensive miscue mixed with poor fortune.

“We give the ball away in a very bad spot,” he said. “It’s a bit lucky where the ball comes off me, bounces back to their player who’s running in. They probably deserved the luck more than we did. They fought hard, but we certainly made it difficult for them to get a result.”

Lucky or not, the result means that Seattle is no longer in the driver’s seat to earn the sole qualifying spot from Group F in the Champions League. The Sounders are still in first place in the group with four points overall, but all three teams in the group can still earn a maximum of seven points, and Olimpia owns the head-to-head against Seattle having scored a goal on the road in a 2-1 loss to Seattle Aug. 19.

Olimpia and the Vancouver Whitecaps still have matches to play against one another Sept. 16 and Oct. 22 in Vancouver and Tegucigalpa, respectively. Seattle, meanwhile, has one more group stage match at home against Vancouver Sept. 23.

Asked if he understood that losing the match at Olimpia meant that he lost the head-to-head regarding who might advance out of the group, Schmid seemed nonplussed.

“Yeah, we understand that,” he said. “But Olimpia still has to play Vancouver twice, and playing in Vancouver will not be an easy task for them. So we need to do what we can do, and today we came up short.”

For Perkins’ part, his advice for what the team had to do against Vancouver and win the group was identical to the team’s requirements for a result against Portland Sunday: