Now that he’s made the cover of Rolling Stone, the Seahawks QB is on the A Train to American pop-culture sainthood. He’s probably made “Recovery Water” the coolest product since the TV remote control. 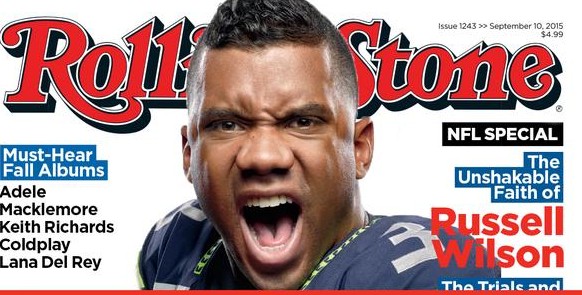 Until he starts throwing footballs in real games, Seahawks QB Russell Wilson will continue to be a headline magnet for his off-field adventures. As he becomes a national pop star, Wilson goes from movie cameo to TV talk show to evangelist to contract showdown to hottie girlfriend to White House guest to product pitchman, apparently oblivious to his own overwhelming ubiquity.

He’s about one skit as Head Wound Harry on Saturday Night Live from being certified as  the Most Overexposed Sports Figure Who Isn’t Charles Barkley. Not that claiming the title would trouble him.

“I’m never worried about that,” he said Thursday after practice, when asked whether too much is enough. “I just take one day at a time, try to be organized, try to be really zoned in. You’ve got to have your priorities straight. You make the main thing, the main thing. First of all, it’s my faith, and then my family, and then football. And all the rest comes with it, which is great. That’s not a bad thing.

“I’ve always been better busy. I like more on my plate.”

The most recent entree on his plate is the cover story in Rolling Stone magazine, “The Chosen One.” The story by a writer granted extensive access covers a lot of ground familiar for Seahawks fans. New is a mention that Wilson is an investor in a tonic made in Tacoma called “Reliant Recovery Water.”

Wilson claimed in the story the elixir’s “nanobubbles” help with recovery from fatigue and injuries, including a concussion when he was hit hard in the NFC Championship during a return of one of his four interceptions.

The concussion was news, since it was not reported at the time, nor did he go through a concussion protocol. And if this product helps with concussions, the NFL figures to buy it by the freighter.

Instead, Wilson offered up a correction.

“I didn’t have a concussion,” he said. “I guess it was perceived wrong, but I did not have a concussion. I was saying that I had consistently been drinking the water for about a month, month and a half, five to seven times a day, and maybe this stuff is helping me out.”

The invalidation of the $3-a-bottle potion’s curative properties for head injuries, as well as the concussion itself, calls into some question the veracity of the story, as well as the product. But as always with Wilson, he believes in it, so it must be true.

“It’s one of those things that I truly do believe it helps with recovery,” he said. “It’s one of those things that the science behind it . . . all that help that they’re trying to do. I’ve been down to the laboratory in Tacoma. It’s pretty amazing to see everything that’s going into it. It’s going to be a special company, I really believe in that.”

“I started drinking the water about a month before the playoffs, consistently drinking it, five, seven times a day. They were telling me that it’s great for recovery. I’ve loved it ever since. I’ve got tons of cases in my house. There are other guys on the team that drink it for sure. I know Kam Chancellor drinks it.  So it’s been a good thing.”

Chancellor would have been asked but . . . well, that’s another story.

Another intriguing thing from the story was that Wilson’s late father, Harrison, long cited by Wilson as his hero and guiding light, was so persuaded by his son’s potential for success that he began tutorials in the Nuke Laloosh School of Saying Nothing A Lot at a young age. From the story:

He began coaching Russell through fake press conferences when the boy was seven. The end result is Wilson is often snarked at for never saying the wrong thing and always being on message. That’s Harrison’s work.

No wonder Wilson is so good at saying nothing. He’s years ahead of most reporters. My only good question at seven was, “Are we there yet?”

Wilson’s programmed behavior and the many programs he’s part of seem of little concern to coach Pete Carroll.

“We do talk a lot,” he said. “Just staying in connection with all that he’s going through. It’s a lot. He has tremendous responsibility and he handles it beautifully. We try to just stay on topic. I don’t want him to be too far away from all of the things that we communicate on that keeps us close to football. He doesn’t let that happen

“I think it’s not too big for him . . . Certainly playing football isn’t.”

If Wilson’s calendar and manner seem a little bewildering to you, don’t feel you’re alone. Wilson’s brother, Harry, was interviewed for the story and said this:

“You could tell (Wilson) the sky is blue and he would be like, ‘No, man, the sky is green.’ He’s probably the most confident person I’ve ever known — and a tough guy to figure out.”

As long as he thinks “nanobubbles” help him, and continues to win NFC Championships despite four interceptions and a walloped head, the only people who have to worry about figuring him out are defensive coordinators.